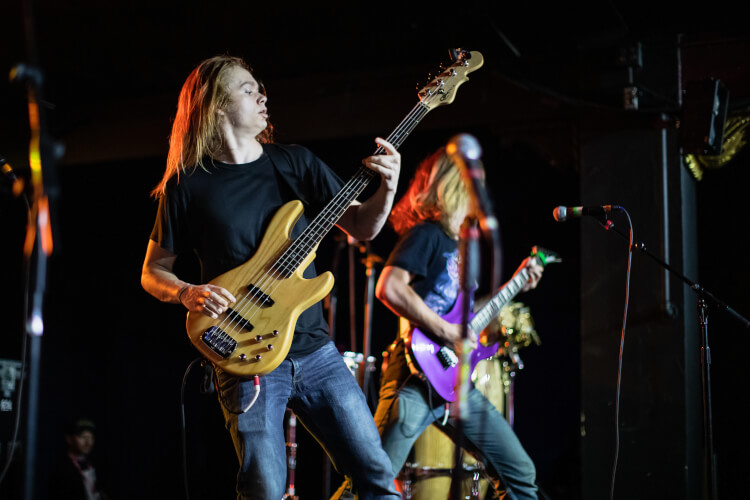 Bass players usually start by learning iconic songs like “Smoke on the Water”, “Another One Bites the Dust,” and “Smells Like Teen Spirit.” These are some killer songs with simple and accessible basslines for a beginner of any age, and if you’ve taken the first step by learning one of these, then you should be proud of your accomplishments thus far!

Now that you’ve gotten a few riffs down, you may be asking yourself “what now?”Take the next step in your musical journey and learn the following songs to continue growing your skillset: 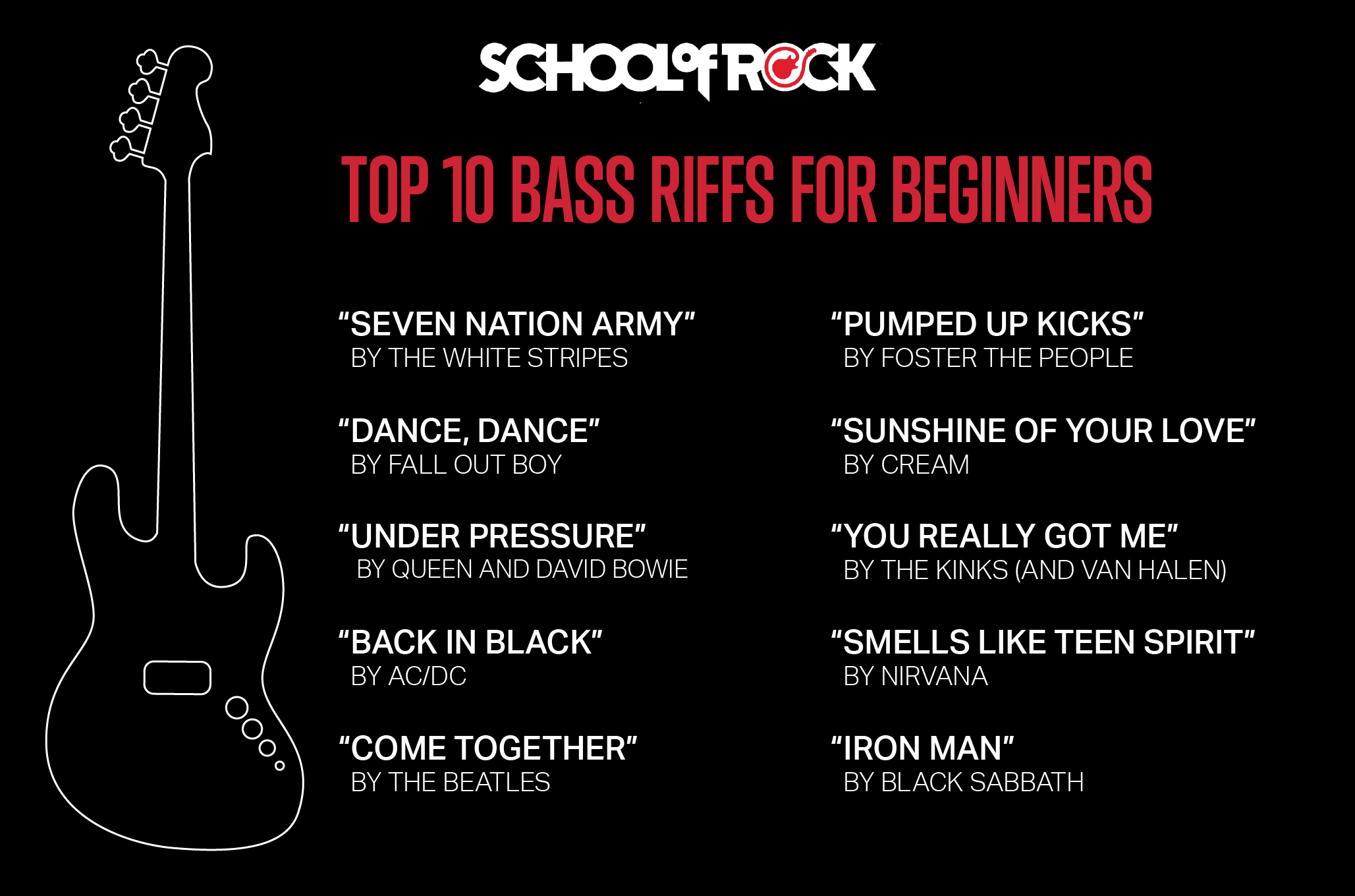 If you’ve taken any music lessons, or even talked to a seasoned player, someone has undoubtedly told you that you NEED to learn “Seven Nation Army.” If you don’t recognize the name, check out the first 30 seconds of the song; you’ve definitely heard it! Although the White Stripes do not have a bass player, Jack White plays this main guitar riff while using an octave pedal – a piece of guitar equipment that lowers the pitch of the guitar, giving it a deep, rhythmic sound – so it makes just as much sense to play it on the bass. So without further ado, let’s get this easy rider out of the way early!

You may be asking, “Why is this song such a common one to learn as a beginner?” To put it simply, the main riff only uses five notes, and all of them fall on one string. Plus, these notes make up the E minor scale. The first note of the song (seventh fret of your A string, an E) serves as your root note. Climbing up to the tenth fret is your minor third, then the song calls for a climb down to hit your seventh, sixth, and fifth. To better understand which notes are used and when, try playing your E minor scale and identifying where each of these notes fall into it!

“Dance, Dance” by Fall Out Boy

The 2000s never failed to provide us with cheesy pop-punk, emo hair and hard-hitting basslines. This 2005 emo anthem is no exception. Not only does Pete Wentz use his signature Precision bass to write an identifiable and unforgettable bassline, but he also uses his major scale!

“Dance, Dance” is played in the key of B minor, which is the relative minor key of D major. The unmatched groove in this bassline is created using only four notes in this key: the root note (D), the perfect fourth (G), the perfect fifth (A) and the relative minor (B). Not only does this make use of the scale and reinforce the method behind writing basslines, but most popular songs from the past 70 years are composed of these same four notes. Shift this bassline around the neck, and you’ll have your four main chords in any key!

“Under Pressure” by Queen and David Bowie

Whether it’s through this Mercury and Bowie collab or its sampling in a 1990 Vanilla Ice song, this bassline makes both songs immediately identifiable from the first two seconds of music. And lucky for us, it’s one of the easiest ones in the book.

While maintaining a simple pattern that jumps between only two notes, “Under Pressure” teaches a beginner bassist how to make quick transitions between eighth and sixteenth notes. The triplet feel that this jump creates, along with steady pick work from John Deacon, provides a fun and simple learning experience. Plus you kind of learn how to play two songs by learning one!

“Back In Black” by AC/DC

Any intermediate bassist, seasoned player or professional musician will tell you the same thing – triplets are a tough concept to learn, and an even harder concept to teach. If a bassist playing their first few songs can wrap their heads around “swing feel,” this concept can be explained by adding a note between your two swing notes. However, the idea behind squeezing three notes into a space where there is traditionally only two, can be a hard one to get the hang of.

No sweat, I promise. We’ve all heard the title track from AC/DC’s masterpiece “Back in Black” - whether it’s at a barbecue with your dad’s friends, your metal elitist cousin’s basement, or on the radio. Without confusing the new bassists of the world by using actual triplets, Cliff Williams maintains a “triplet feel” during the verses by hitting three consecutive sixteenth notes. As mentioned, triplets are also hard for your instructor to explain, and this is a spectacular way to start the move from simple sixteenth notes to basic use of triplets. Baby steps, am I right?

“Come Together” by the Beatles

Yeah, yeah. Are you surprised?

Although this bassline uses the same minor scale that we’ve mentioned in almost every entry, “Come Together” makes use of a technique called “sliding.” For those of you who may not know, sliding is exactly what it sounds like – starting on a low note on the bass neck, and sliding your finger up to a higher note, hitting every note in between. McCartney starts on a D note (fifth fret, A string) and slides up to hit his perfect fourth and fifth (10th and 12th frets, respectively), before climbing up to settle on a D octave. A slide from your fifth fret to your 10th may be a bit daunting at first, but as something that comes up in bass playing of almost any genre, this technique is an important one to nail down in your early studies.

“Pumped Up Kicks” by Foster the People

Okay, you’ve made it this far. Now that we’ve moved past your conventional major and minor scale songs, we can talk about this upbeat Foster the People tune. Assuming you’ve learned your major scale before or during your time reading this article, let’s take this one step further. “Modes” make use of your major scale by changing which note you start and end on. For example, if you are using your C major scale (or Ionian mode), starting and ending on a D changes this to the D Dorian mode.

As you can probably guess by the subheading and previous explanation, the bassline for Foster the People’s 2010 hit “Pumped Up Kicks” walks up and down the F Dorian mode. Even non-musicians took notice of this bassline when the song was released, and it has only accumulated more fame through its return to the spotlight on TikTok. If you’re looking for a good introduction to your modes, be sure to include Pumped Up Kicks in your repertoire.

“Sunshine of Your Love” by Cream

This classic by Cream features the bass work of Jack Bruce.  While Bruce is a bass virtuoso, this riff is based on the Dm Blues scale. The Blues scale is a 6 note hexatonic scale that takes the 5 note Pentatonic scale and adds the “blue note,” the b5 to add more flavor. The song starts on the root note of D and then when the chords change, it goes to the IV, a very common chord progression found in thousands of songs.

You can transpose this riff into any key; transposing just means playing the same pattern of notes but changing the root note (in this case the starting note). Transposing is a great way to practice riffs as you move them to different positions of the fretboard. As you transpose riffs, practice naming the notes that you play.  This will help you learn the entire fretboard.  Remember, once you hit the 12th fret, all the notes start over in a new octave.

“You Really Got Me” by the Kinks (and Van Halen)

“You Really Got Me” is a well known British Invasion song by the Kinks that also found new life when it was covered by Van Halen on their debut album. It’s another really basic bass riff that demonstrates the full step interval, or the interval of two frets. The song uses the Mixolydian mode, which is the major scale with the last note lowered by one half step.

The Kinks version version starts with playing a simple pattern on the 1st and 3rd frets of the E string. The starting note is the 1st fret (F) and then if goes to the 3rd fret (G) in this pattern:  FGGFG, FGGFG. It then goes up to the 3rd and 5th frets with the note G and A: GAAGA, GAAGA. Finally it goes to 3rd and 5th frets of the A string: CDDCD, CDDCD before “hanging” on the C note and going back to the original riff. Van Halen’s version is in the key of A which is one step higher than the original.

Here is a monster riff played by Nirvana bassist Krist Novoselic. This is the song that kicked off the Grunge explosion and put Seattle on the map. This driving and repetitive riff is great for developing your sense of timing and rhythm. The song uses a classic formula of “quiet” verses that build up to a loud chorus. In musical terms, this is referred to as dynamics.  Dynamics allow songs to breathe and create tension and release within the music.

The song is in the key of Fm and for the verse and chorus it has a pattern of just 5 notes. It follows the guitar power chords of F, Bb, Ab, Db.  The fifth note is a slide from G to Ab that is referred to as a passing tone. This give the riff a little extra “flavor” and syncopation. The verse has a very “straight” feel of muted ⅛ notes and it opens up to louder notes on the chorus.  There is a third part, referred to as a “bridge” that provides a contrast to the repetition of the verse/chorus riff.

“Iron Man” is one of the essential bass lines that everyone learns. Black Sabbath basically invented the genre of Heavy Metal and even if that’s not your thing, there is a lot to learn from bassist Geezer Butler. While the solo section has a crazy, grooving almost Jazz feel, we are going to concentrate on the main iconic riff.

A quick note here, if you play along to the song you will sound slightly out of tune (even if your bass is perfectly in tune). This is because the song was recorded in 1970 to analog tape. Back then, sometime when albums were mixed, they slightly sped up or slowed down the tape to make the song faster or slower. In doing so, they slightly changed the pitch of the actual recording! If you just slightly tune your strings sharp (higher) you will be in tune with the recording. The song tempo is very slow, only about 75 BPM (beats per minute). The main riff is in Em and has the notes B, D, E, G and F#.

We know that learning a new instrument can be daunting. Remember to go easy on yourself. Flea didn’t become a superstar overnight. McCartney had years of guitar-playing under his belt before he so much as touched a bass. Everyone starts somewhere, and what better place than right here with us. At the School of Rock, we take the Songfirst approach of teaching. Much like the format of this article, you will be shown a song and the techniques will be built upon as you move forward with your instructor. Sign up for a trial lesson at a school near you!

ABOUT THE AUTHOR: Matt Spafford is an Instructor at School of Rock Orleans teaching Guitar and Bass Guitar. Aside from teaching, Matt spends his time playing with Ontario Pop-Rock group, Certainty, as well as writing and recording music as a solo musician.