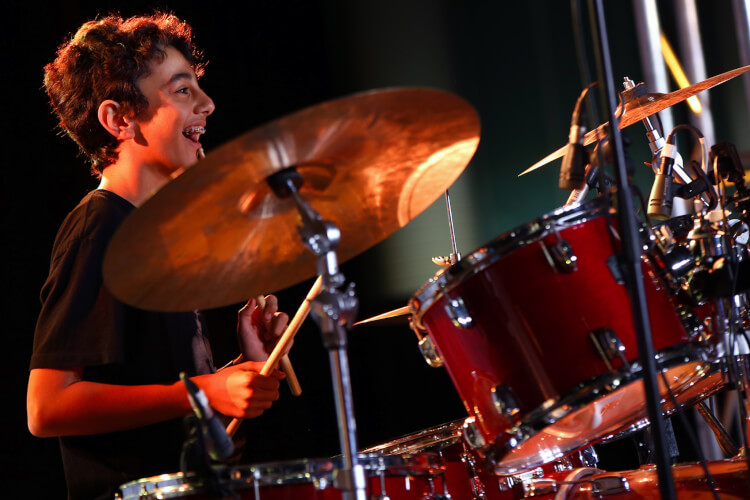 Congratulations! You absolutely chose the right instrument to learn when you picked the drums! The drum is one of the oldest instruments and has been one of the most important throughout human history. From being used as a form of communication both in peacetime and in war, to the concert hall giving a pulse and adding color to the symphonic epics of Beethoven, Wagner, and Holst, to being the backbone of rock, country, jazz, Latin, pop, R&B, and an endless list of other styles; the drums have certainly seen a lot over the years.

The drums are the easiest instrument to learn, but the hardest to master, but after you learn a few basic patterns and grooves you can pretty much hang in on any song you choose! Drum parts can be simplified to a point where anyone can play them. As you grow as a player, you can go beyond playing simplified parts until eventually, you’re playing in perfect unison with your drumming heroes.

There are so many options to choose from when it comes to picking your first song. In addition to this resource, a good teacher will be instrumental (pun intended) in helping you choose the right song to start with. I have selected 10 songs from different genres and eras that will get you started on the path towards long-term drumming success! 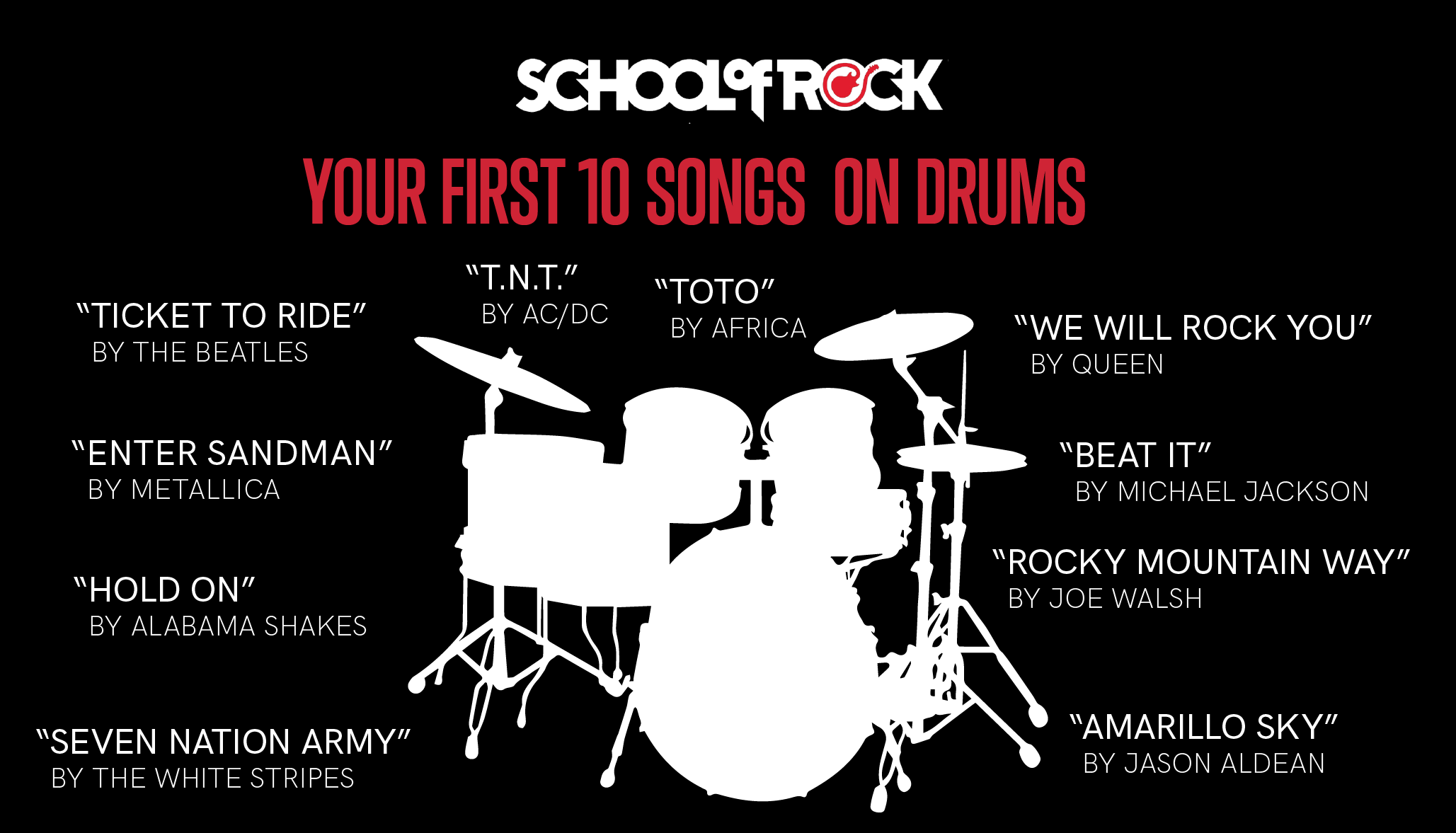 1. “We Will Rock You” by Queen, with drummer Roger Taylor

Starting with one of the most iconic songs ever, “We Will Rock You” by Queen is one of those songs that everyone will not only be singing along to but will be drumming along to as well! Despite being on this list of drum songs, there are no drums on this track. The “percussion” utilizes stomping and clapping to create the legendary “boom, boom, schmack” that everyone knows. This song instantly makes me think of being at a sporting event, particularly a baseball game when the home team is about to come to bat!

“We Will Rock You” has simple rhythm that pretty much anyone can learn. Musically speaking, it has several elements that are great to begin developing on day 1, making it appropriate for any age.

Even though there are no real drums on the recording, the “boom, boom, schmack” can easily be recreated on the kit. The stomps can easily be replaced by the toms, the kick drum, or both. The claps become a flam on the snare drum on beats 2 and 4. The challenge for the student is to recreate non-drum-originated sounds on the kit. This will give both new and veteran drummers something to work towards! Roger Taylor does an excellent job in bringing this a capella part to life during a live performance of the song, check out the video below. 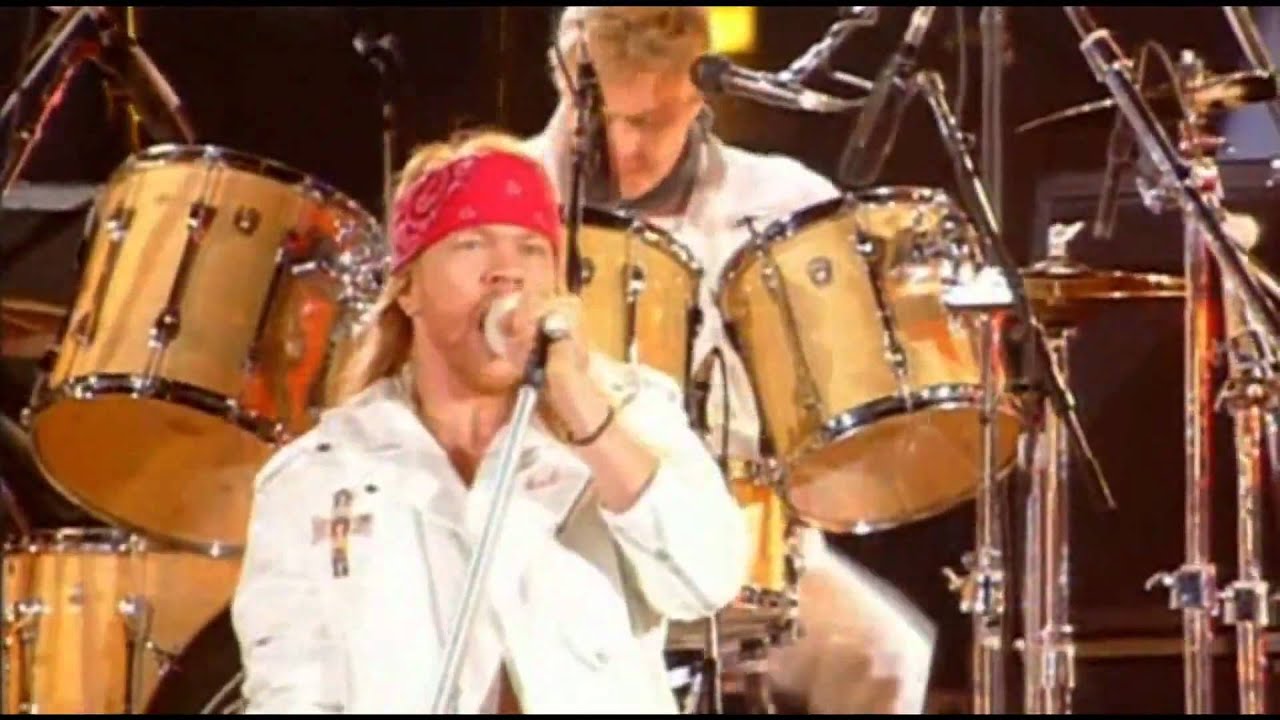 Queen Axl Rose "We Will Rock You" Tribute

“Seven Nation Army” is another song that instantly brings the energy up in the room. The White Stripes were a rock duo (yes, a duo) that was active from 1997 until 2011. A simple song form with repeating sections makes it easy to make a song map while you’re learning it. This is a song that you can absolutely “go ham” on while still working to maintain a steady groove and tempo. In addition to that, there are several other elements that make this tune an absolute must-learn for beginners!

Quarter notes are one of the easier rhythms to learn as they are counted using only numbers. If you can count to four over and over again (1, 2, 3, 4, 1, 2, 3, 4, etc.) you can count quarter notes! One of the challenges for this song would be ensuring that there is equal spacing between each note; not playing too soon or too late. Doing this will make the quarter note triplets have the proper effect in context! 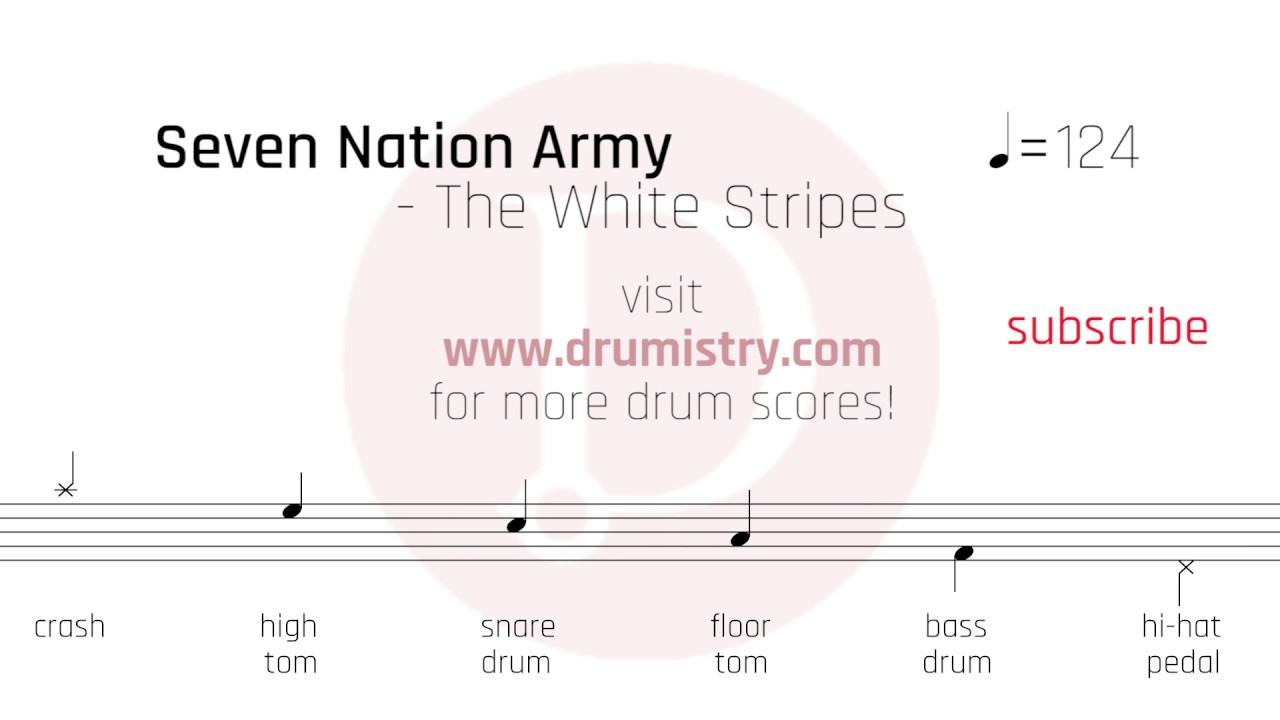 3. “Hold On” by Alabama Shakes, with drummer Steve Johnson

The band Alabama Shakes was a more recently active band, forming in 2009 and staying together until 2018. Their unique sound that blends both modern and old school will certainly attract most students. This is another song with a relatively simple structure that’s easy to follow and learn. The song has a very chill feel that amps up when the chorus starts. It rollercoasters between high and low energy with enough variety to keep students interested.

Getting the rest in the right spot during the fills will be the biggest challenge for a new drum student. This is a perfect song to practice counting and playing at the same time. Doing so will help the student become more aware of where they are in the music and how their parts fit into the musical puzzle. 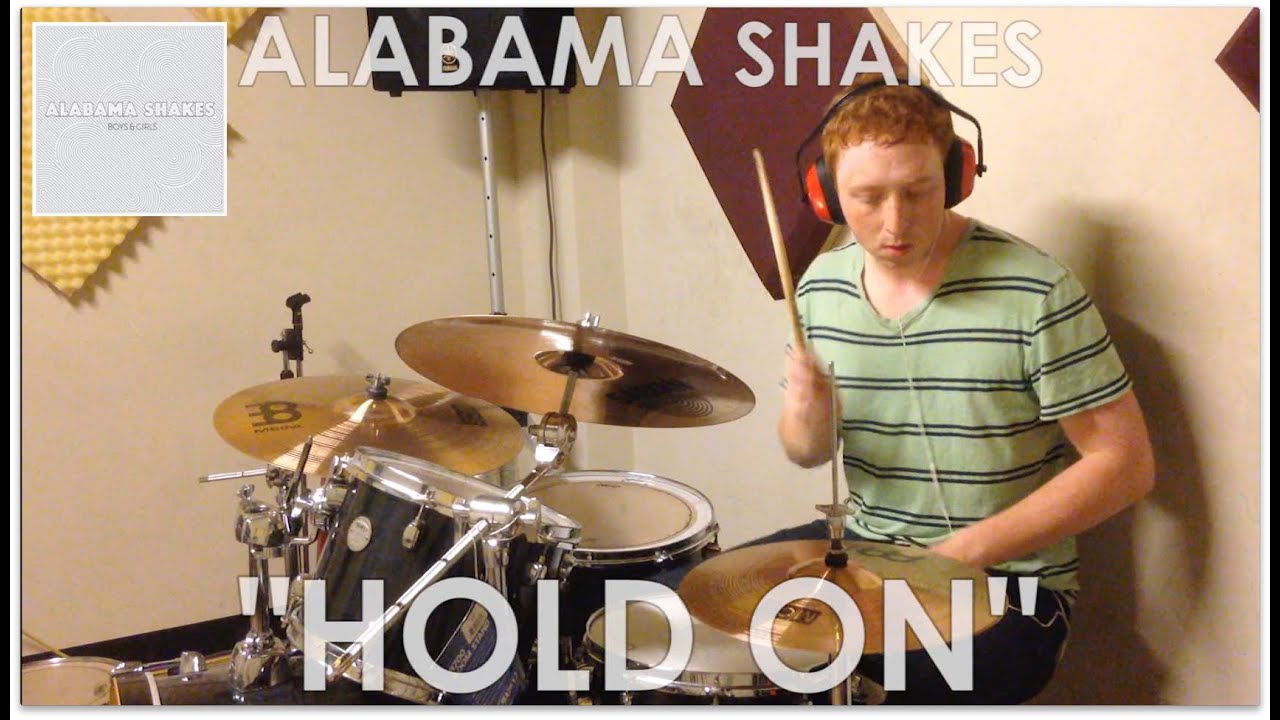 4. “Come Together” by the Beatles, with drummer Ringo Starr

If there are any music fans out there, I’m sure you knew it was only a matter of time before this man made an appearance on this list! Ringo Starr is perhaps one of, if not the most important rock drummer ever. While not the most technically gifted drummer (you won’t find him playing Dream Theater) his feel, style, and ability to create the perfect part is unmatched. “Come Together” is a perfect example of this.

The biggest challenge of this song is recreating the iconic feel of Ringo Starr. Ringo’s style is said to be often attempted, but never imitated.” The truth is the only person that sounds like Ringo is, Ringo. But, that shouldn’t stop you from trying!  The song’s slow tempo is perfect for beginners and is great practice for counting ¼ note and ⅛ grooves. 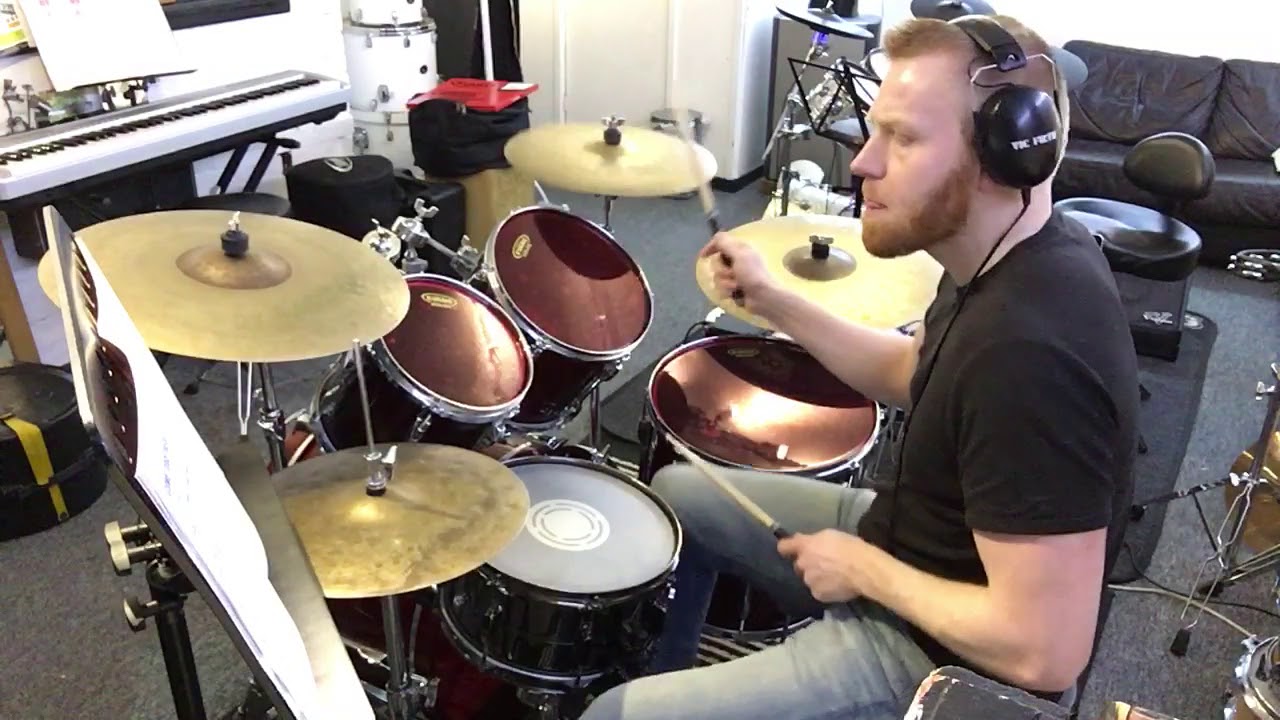 “Rocky Mountain Way” is the bluesiest song on the list so far. It’s also the first song on the list to be in a triple meter. The 1, 2, 3, 4, 5, 6, feel of this song is not unique. It is likely the second most common feel after 1, 2, 3, 4. Joe Walsh perfectly marries the blues and rock in this tune. The skills developed in this song can be carried onward and will most definitely be used again in your playing career.

6/8 and 12/8 are the most common triple meters in popular music. Though you could count from 1 to 12 over and over again, a macro feel is usually imposed over this. While 12/8 has 12 eighth notes in each measure, the feel is almost always broken down into four groups of 3. A way you can practice this is to count: “one, two, three, two, two, three, three, two, three, four, two, three” with the bold counts representing each beat. It’ll put the triple meter into more easily understood terms should you have only played songs in 4/4 to this point. Songs whose time signatures have an 8 as the bottom number and have a multiple of 3 on the top are felt in triplet time. In double time, groups of 2 get the beat, while in triple time, groups of three get the beat. 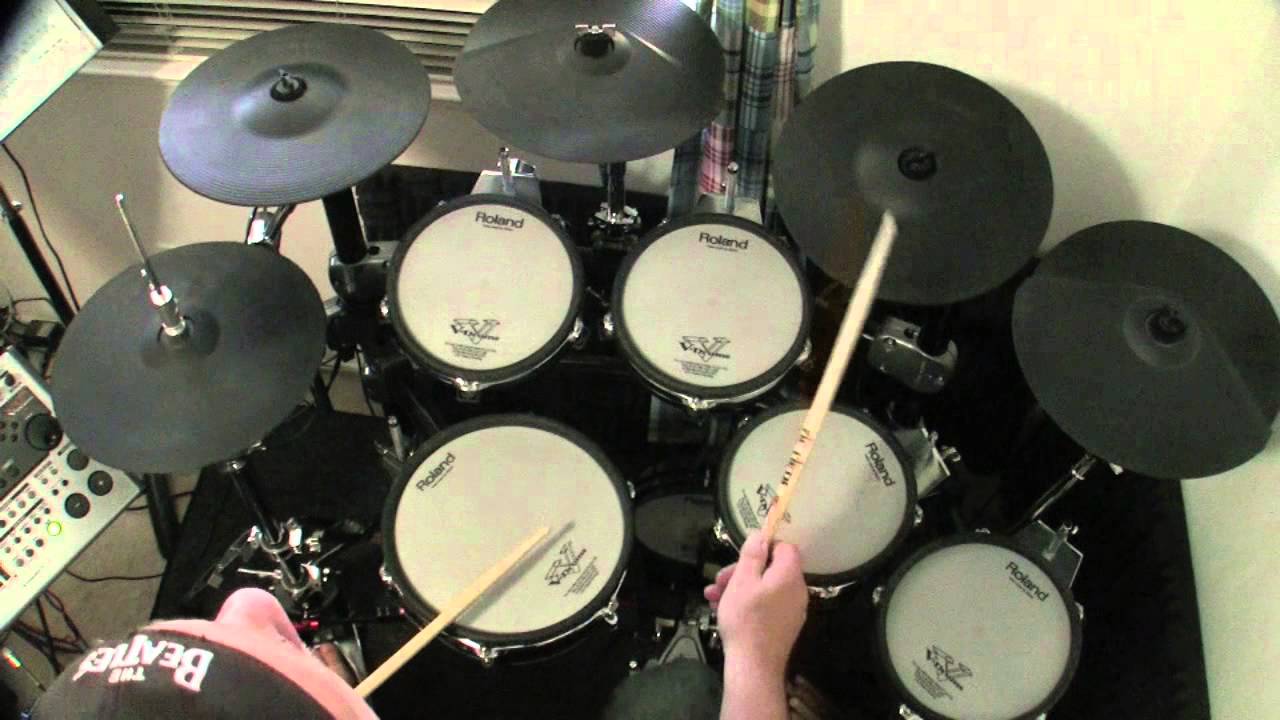 We now come to the king of “K.I.S.S.” style (Keep It Simple, Silly) drumming. Phil Rudd from AC/DC made his name by being one of the best to ever lay down and maintain a rock-solid groove. His bread and butter is eighth note hi hat grooves with the snare on beat 2 and beat 4. No one will ever accuse Phil Rudd of overplaying. Very few can match the accuracy and consistency of Rudd’s drumming. This song is another big hit with students and they can sing along to the chorus while playing. It’s also another high-energy song that will keep them occupied. There are several pieces of this tune, however, that make this one worth learning.

Crash Over the Barline

With so many different sections and different parts to go with each, “T.N.T.” challenges the player with memorizing and later recalling which sections are which. This is a great and important skill to develop as a budding drummer. 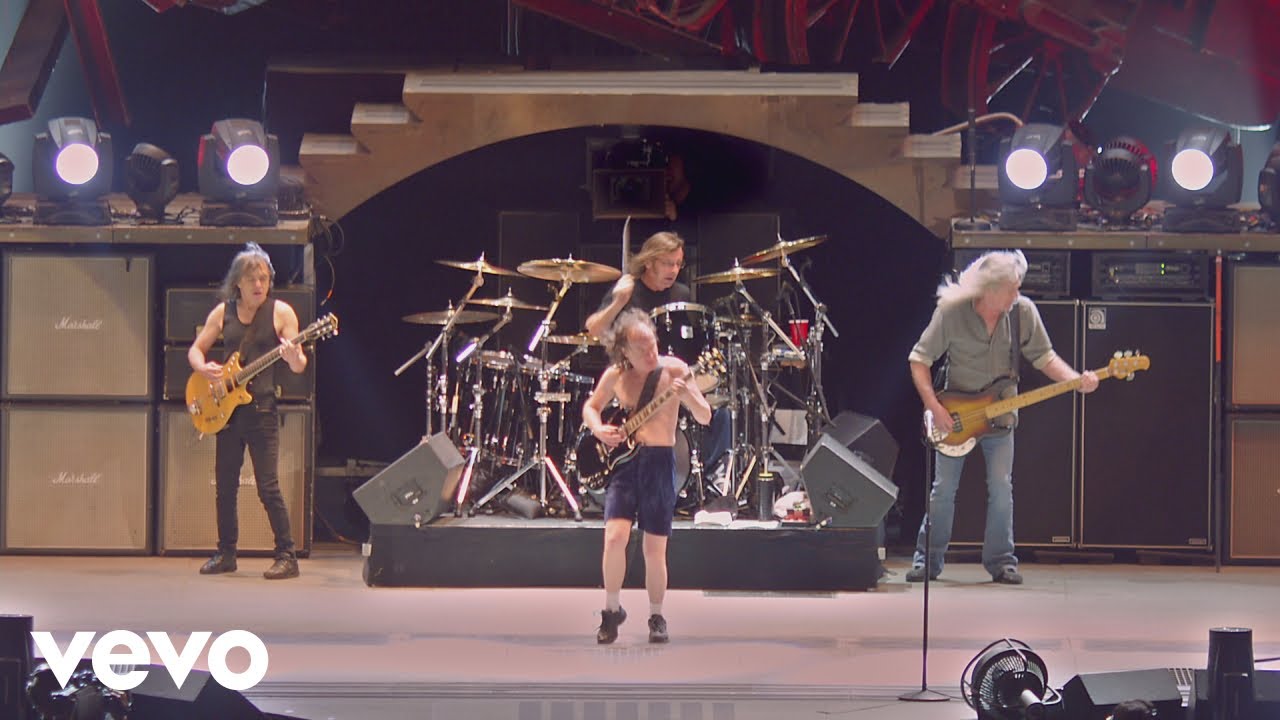 “Bad Moon Rising” is one of the best songs for beginning drummers as it’s based on a very simple beat with just two minor changes in the syncopation of the kick drum.  While CCR was a rock ‘n’ roll band, they had influences from country, folk, and blues. This tune has a distinct country feel.

The challenge of playing country and roots music whether you’re brand new or have been playing for 20 years is being disciplined enough to stay out of the way of the vocals and other instruments. As a drummer you’re essentially just there for effects and big moments. Understanding that role is important for long-term success in many styles of music. 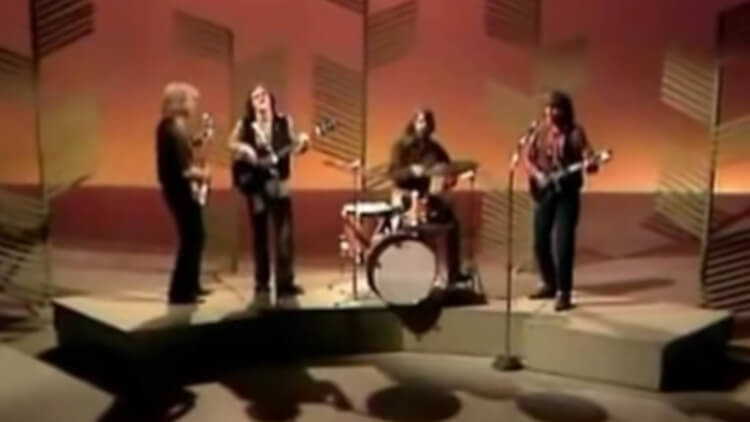 Jeff Porcaro was one of the greatest studio drummers ever. He laid down the drum tracks on many well-known songs throughout his career. His parts, like Ringo’s, always seem to be “just right” for the song.That being said, this is not his only appearance on this list! He is perhaps most well known for his work with the band Toto. While his magnum opus would most likely be considered to be the song “Rosanna,” his drumming on “Africa” is some of the most tasteful playing you’ll ever hear.

The real challenge of this song is getting the touch right. For a beginner drummer, none of the parts are too difficult (save for the one handed sixteenth notes) so they’ll be able to learn it with ease especially with the guidance of a teacher. Because of this, they can quickly move onto developing their musicianship, focusing on not only how loud or soft they are playing, but how they’re actually striking the drums and cymbals. Beginners can work on playing accurately and with a lighter touch, while my advanced students will strive to imitate a shaker in the hi hat part. 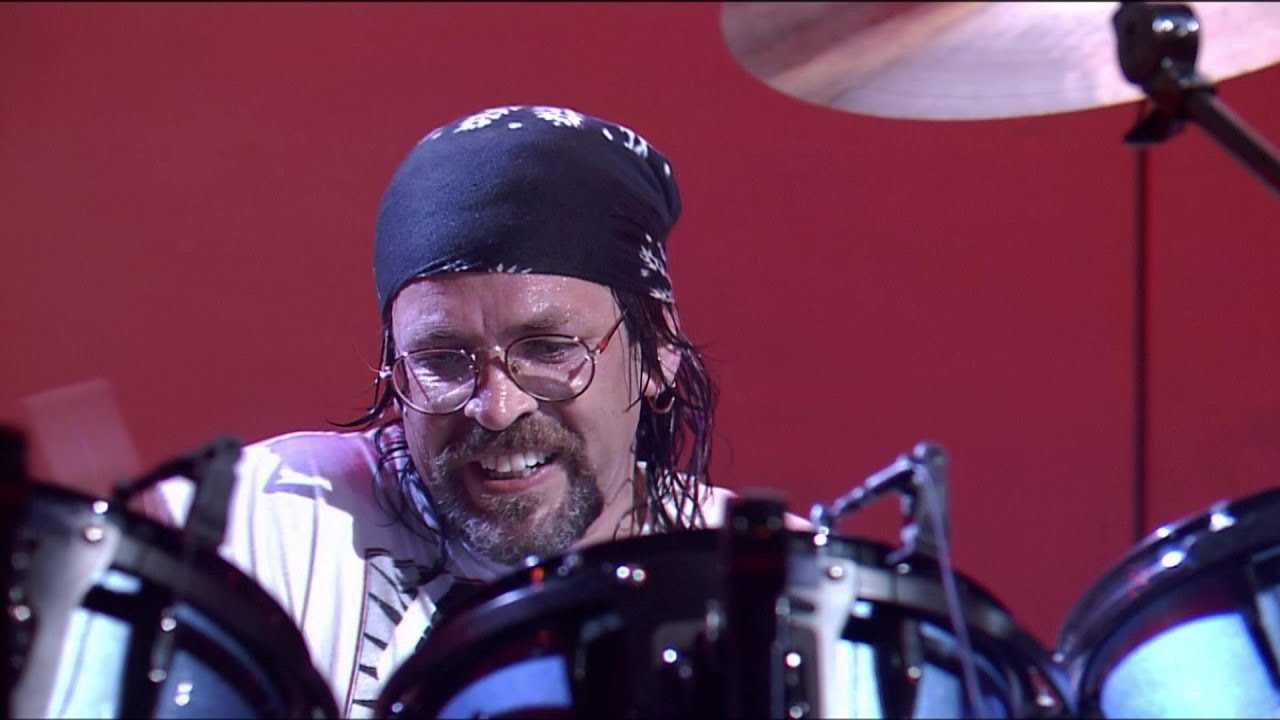 By far, one of the most popular songs among student drummers is “Enter Sandman.” The drums are so aggressive sounding, which may be what so many students love most about the song – they never feel like they’re hitting too hard!

To Accent or Not To Accent, That is the Question

The upbeat accents tend to be the biggest challenge students have when playing this song. Through patience and audible counting, though, the issues are corrected fairly quickly. “Enter Sandman” is a great learning opportunity for students to figure out how to keep their energy level high but also focus on accuracy. 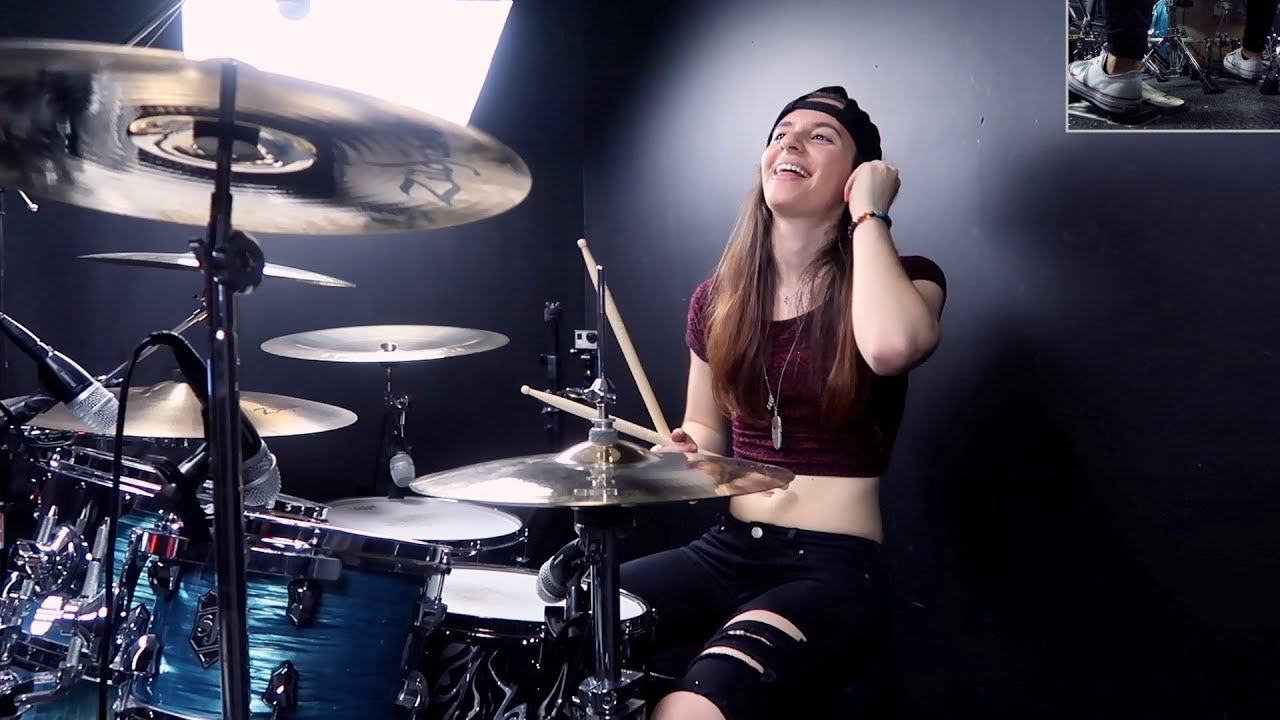 10. “Beat It” by Michael Jackson, with drummer Jeff Porcaro

We’re capping this list off with an absolute all-star laden track. “Beat It” features not only Jeff Porcaro on drums again, but also other members of Toto, legendary session musicians like Greg Phillinganes, and also Eddie Van Halen! And let’s not forget the mastermind behind it all, Michael Jackson. After listening to the song and hearing the blending of hard rock and pop, any remaining doubters consistently fall in love with the song. And best of all, there’s a lot to teach in it!

The tempo or speed of this song tends to be the biggest challenge for beginner students. “Beat It” is around 140 beats per minute (bpm), which is on the faster side. It’s definitely a stretch for some beginners. The trick here, like anything that’s too difficult, is to slow it down to a tempo that is achievable (maybe like 100bpm), then slowly increase the speed until you reach the true tempo. Make sure you utilize a metronome in order to stay on time! 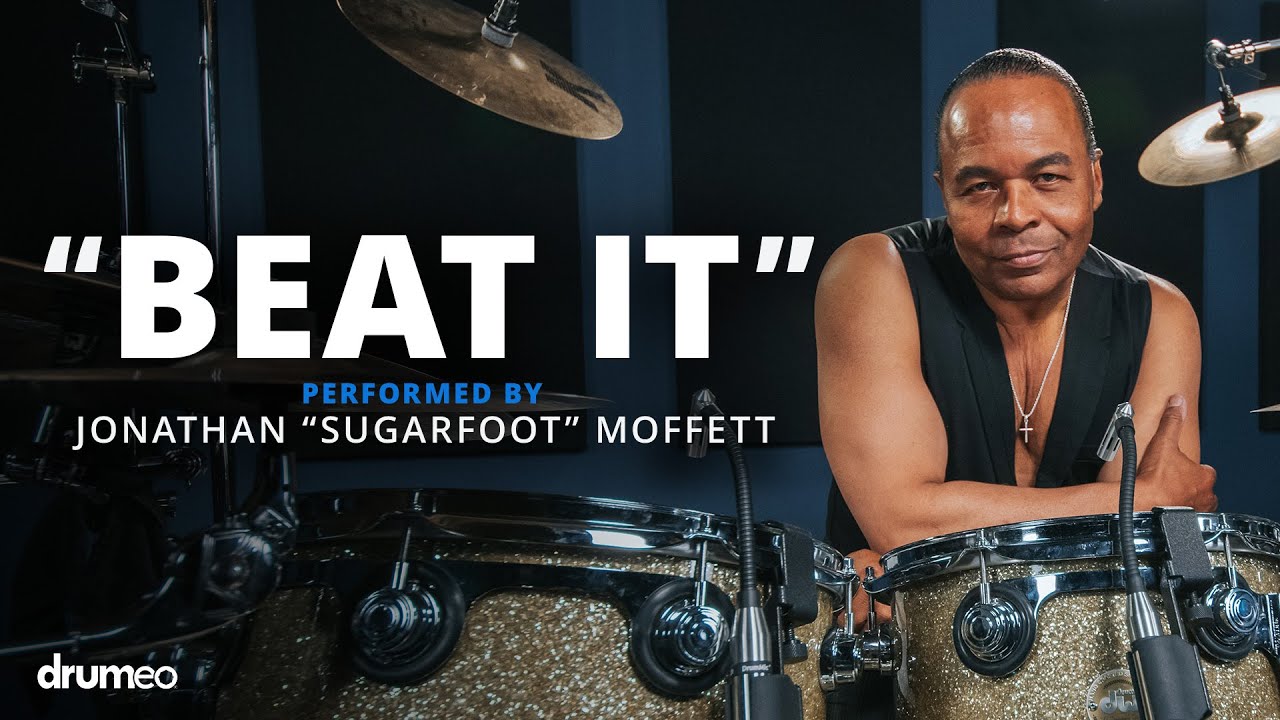 Are You Ready to Take Your Drum Skills to the Next Level?

These are just 10 of the hundreds of songs we would recommend for a beginner drummer. These songs are absolutely achievable on your own, but nothing compares to working with an experienced teacher. At School of Rock, we have tons of resources and tools that we can use to help you become the drummer you’ve always dreamed of being. There’s not much that a School of Rock teacher can’t help you with! If you’re not already signed up, give your local school a call today to set up your trial lesson!

Mike Avin is the show director and drum teacher at School of Rock Somerville, NJ. He has experience in drums/percussion, keyboard, guitar, bass guitar and harmonica.