Join the Band! Save your preferred spot. Now enrolling in all music programs & Summer 2023 Camps. Contact us to schedule a FREE trial lesson and learn more about the patented School of Rock Method of music education! 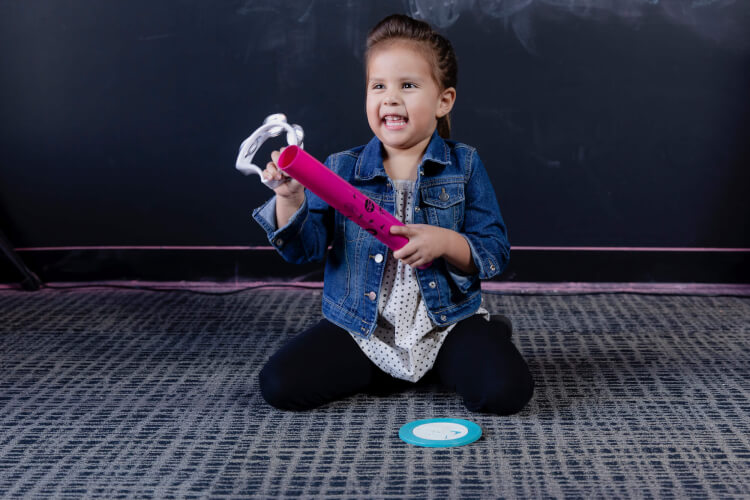 All musicians know on some deep, intuitive level that music has power—maybe especially for young children. And although most people don’t need scientific research to prove that music can bring us joy and lift our moods, there is a growing body of evidence that shows just how important music is for cognitive development in early childhood.

Jump to a section about the effects of music on child development.

How music affects your child’s brain

Early brain development is all about building connections through input from the outside world, and music provides a rich and supplementary source of input as young brains develop.

Exposure to music allows young brains to soak in the range of notes, tones, and words they will later use, and in doing so, build neural pathways that can influence and enhance cognitive ability for a lifetime.

Music builds neural pathways throughout the brain, but especially in the corpus callosum, a band of tissue that connects the two hemispheres of the brain. This, neurologists believe, conveys a whole range of benefits, including increased problem-solving ability and greater emotional resilience.

Does research support how music education affects the brain?

Research shows that almost any music has positive effects on brain development. In the 1990s, research suggested that listening to classical music would make babies smarter —specifically the almost mathematically precise works of Mozart. There does seem to be some truth to this phenomenon, which is sometimes called “the Mozart effect.”

Research shows that almost any music has positive effects on brain development.

One theory is that music, particularly playing music, strengthens the connection between a child’s sense of hearing and the brain’s ability to process sounds. In other words, it’s one thing to hear music, but another to fully recognize the subtle changes in tone and patterns within the music.

This ability to recognize subtle complexity can carry over into other areas and improve cognitive performance. Once a child is old enough to express interest, musical activities and lessons can strengthen this ability and help ensure that these benefits carry over into adulthood.

Why is learning music important for your child’s development?

There’s no specific child-development music that will make your children smarter, but there is evidence that learning music has a positive effect on brain development in children. In fact, children can enjoy many benefits of music education if they participate from an early age.

Benefits of music on child development

Music is important in the early years, as it affects children’s intelligence and emotions, and helps them develop their skills, including: 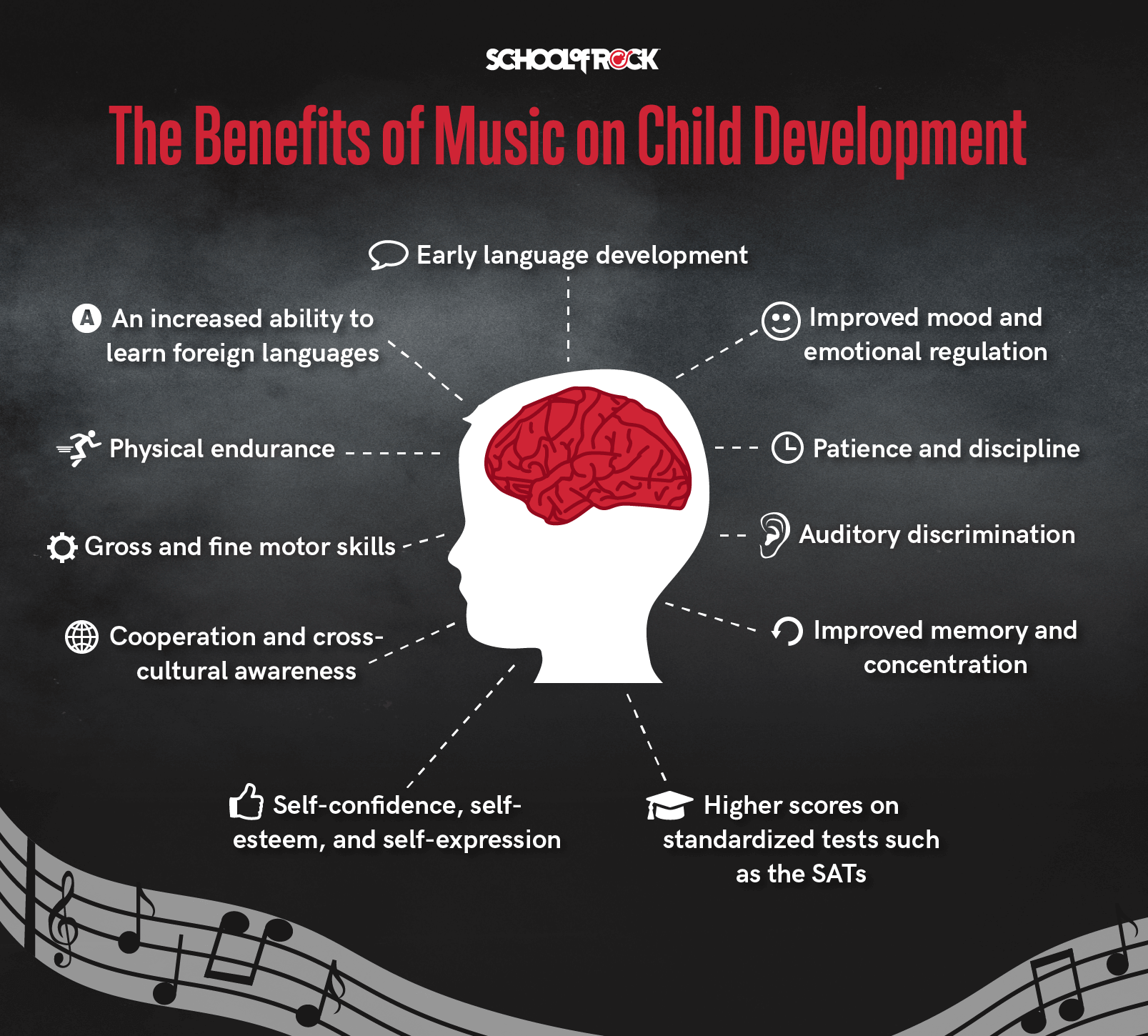 There are many benefits of playing music on brain development.

There is almost no aspect of human cognition and development that can’t be improved by listening to and learning to play music.

These benefits last well into adulthood and even old age because when a brain builds more neural pathways early on, that brain is better able to retain new information and resist the deterioration of memory.

Yes, exposure to music will influence your child’s behavior, but perhaps not how you think, because the style of the music may not matter. Exposure to music strengthens the corpus callosum, the tissue that connects the two hemispheres of the brain.

With that connection strengthened, a child will be better equipped to regulate their mood, emotions, and behavior.

When should your child start learning to play an instrument?

Children who start learning an instrument before the age of 7 seem to have greater neuroplasticity (the brain’s ability to grow, change, and even heal itself) throughout their lives. This is just one of many effects of music on the brain that they can benefit from for years to come.

It’s important, however, to keep these lessons fun. Children learn best through play, and should experiment with as many different instruments as possible. This is an ideal time to start learning an instrument. Playing any instrument—whether piccolo or piano—requires fine motor skills, good hand-eye coordination and a strong brain-body connection.

During these early months, children are learning to experience the world and move through it, figuring out where they end and where the world outside them begins. 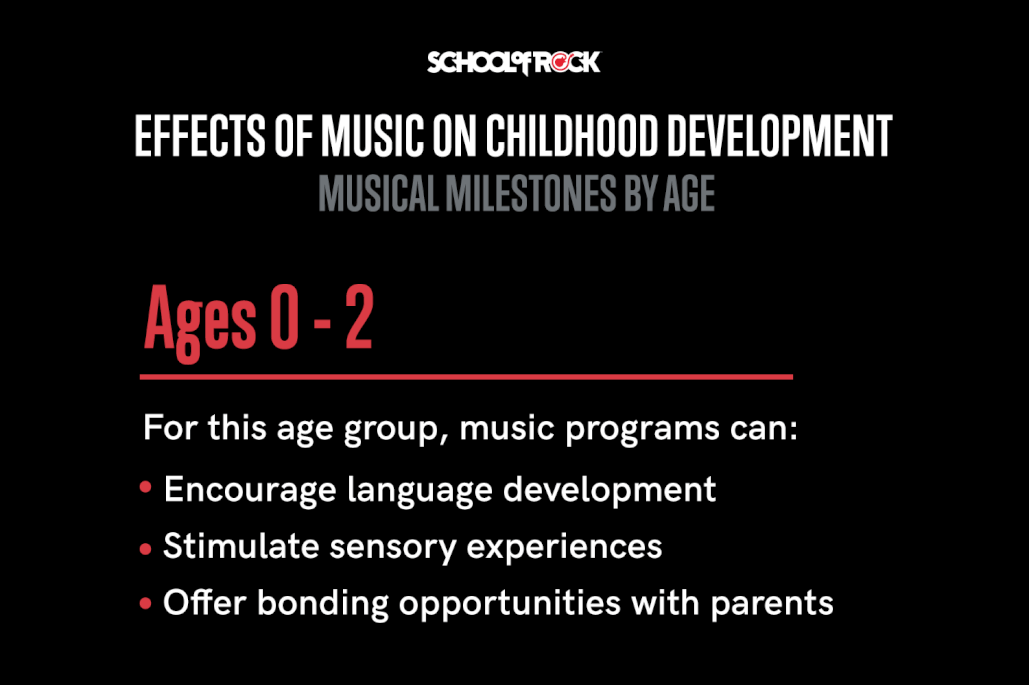 So why is it good to play music to babies and toddlers?

Most children in this age range are pre-verbal, but that doesn’t mean that their brains aren’t intensely interested in language. Music can soothe babies and toddlers while presenting their brains with a chance to work with the sounds that are essentially the raw materials of language.

Just as it did with infants, music can help toddlers and young children further develop their ear—their ability to process fine distinctions in sound.

Children between the ages of 2 and 6 still see themselves as the center of the universe, so it can be hard for them to share toys or play cooperative games. This is another way in which music can really boost development. Making music together—by singing the same song, for example, or using percussion instruments to keep time—is a form of parallel play. 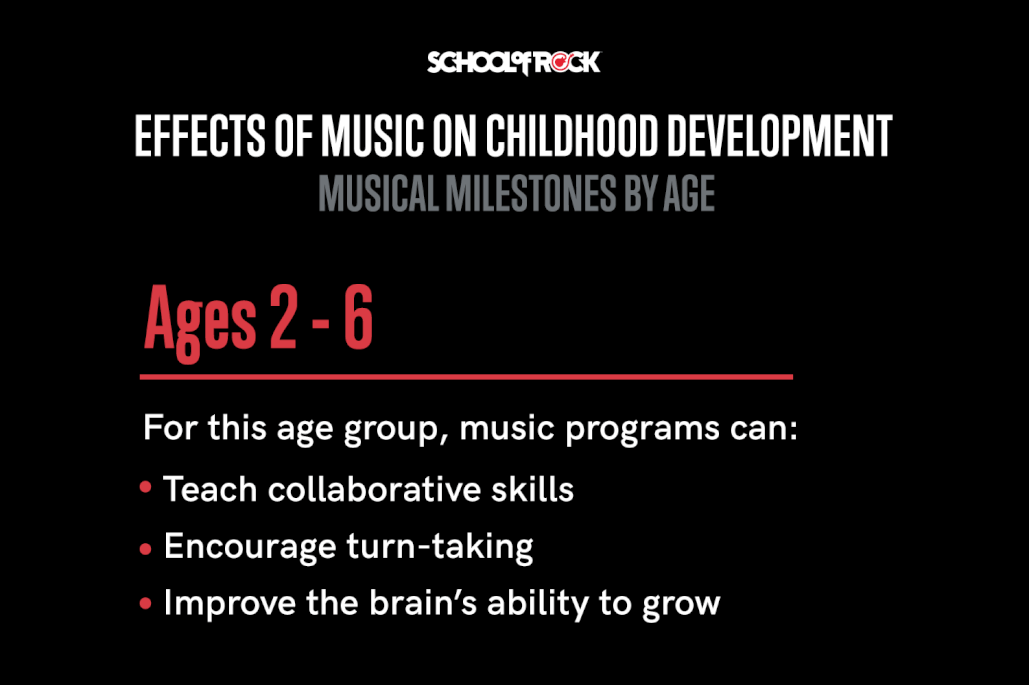 To sum it up, music in the early years is important for the following reasons: 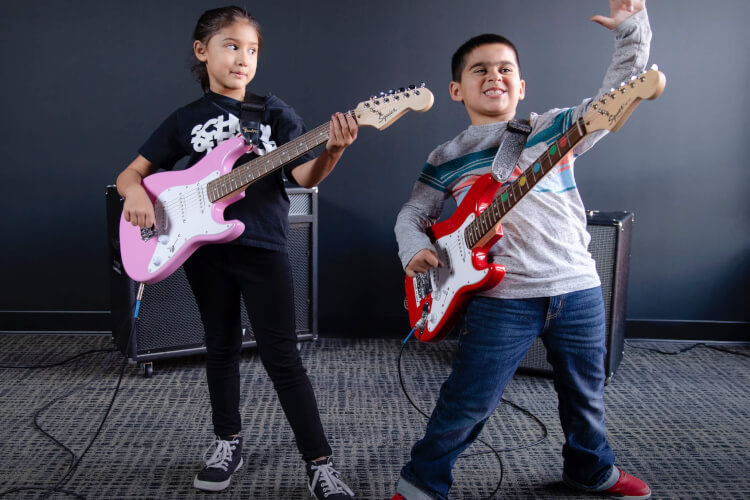 Little Wing is School of Rock's music program designed for youngest students (mainly 3 to 5-year-olds), and engages kids with a specialized curriculum filled with fun, games, and interactive music activities.

The effects of music on early child development continue into the phase when school children begin to master logical and mathematical thinking. 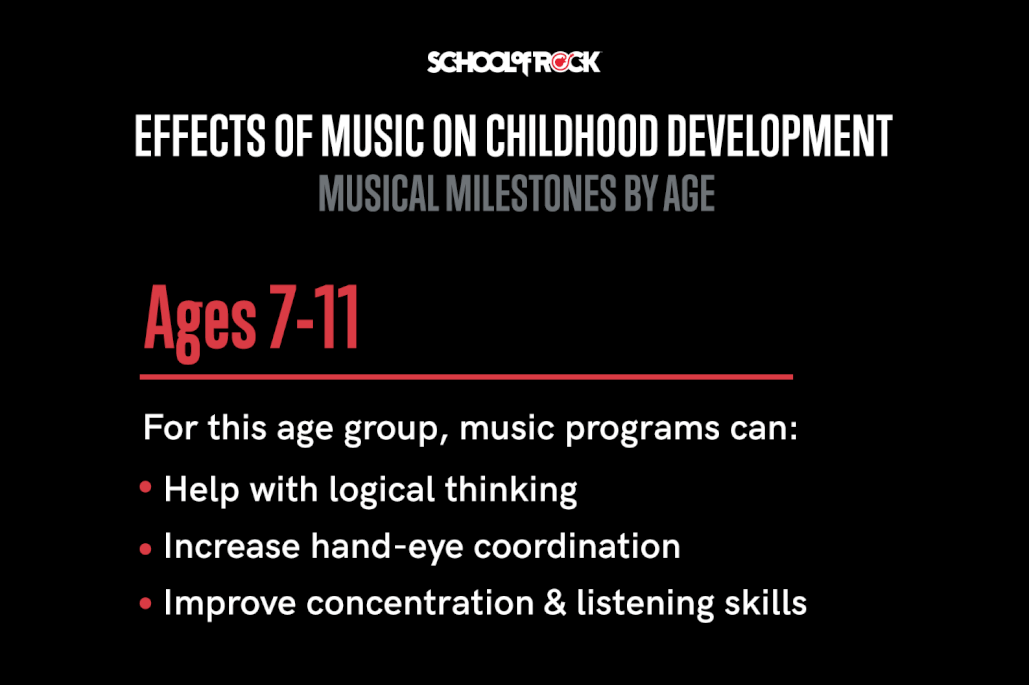 To sum it up, music education for kids ages 7 to 11 is important for the following reasons:

Children in this age range love to solve puzzles, to see how the parts of something can make up a whole. That means they’re likely to enjoy learning harmonies or working in small music ensembles where each instrument has a different part to play. 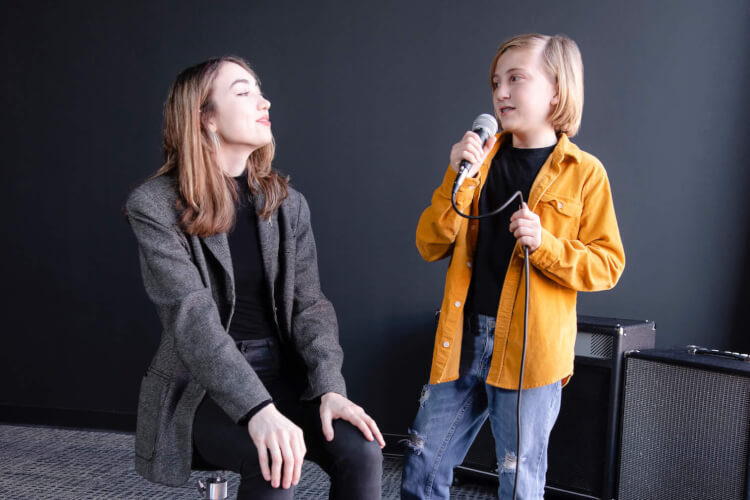 Rock 101 is one of School of Rock’s major programs for kids and beginners, designed to teach all the fundamentals and get your kid excited about music in a fun and positive environment.

The effects of music on the adolescent brain: Ages 12 and up

The benefits of music on child development extend well into the teen years, and perhaps even into adulthood. A study from the Salk Institute for Biological Studies suggests that the brains of students who began participation in a music program during their high school years developed more quickly. These benefits can also improve their language skills, test-taking ability and even self-regulation.

During this stage of life, teens can benefit from learning music theory because they’re equipped to fully grasp abstract concepts. In addition, from this point on and through adulthood, cognitive development is linked to the accumulation of knowledge. Teen musicians can begin to build up a repertoire of songs they can play without additional preparation. 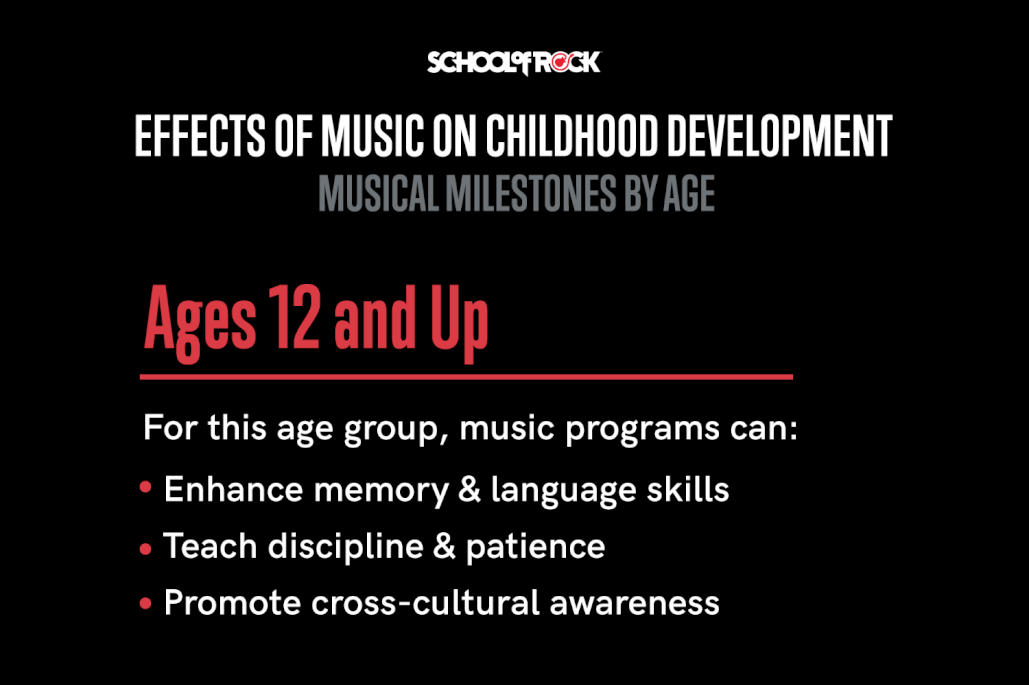 How does music influence adolescent behavior and social skills?

On a social level, teens use music to bond with one another at a time when friends are important and emotions are running high. Teens who play music in groups or bands are not just fostering friendships with their peers, but also learning to keep their cool during negotiations and listen carefully to one another—because that’s the only way to make music.

Teens also use music to distinguish themselves from their parents. This provides a safe and productive way for teens to own and grow their individual identities. 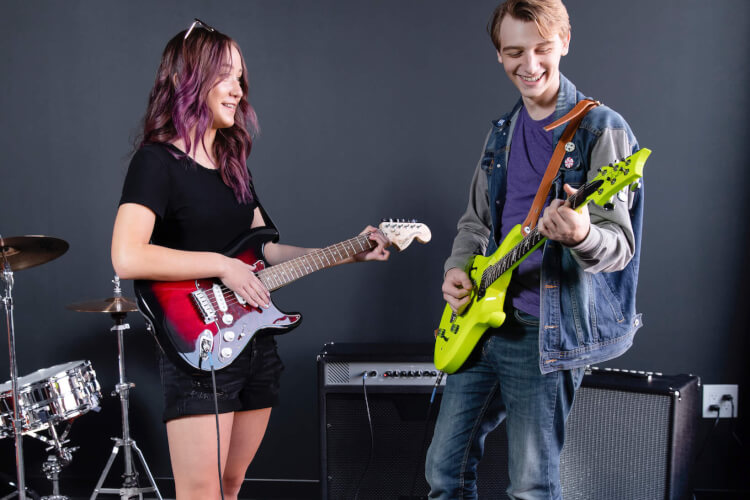 The Performance Program is School of Rock's hallmark music program, where tens of thousands of students enroll each year. Take weekly private and group classes designed to transform students into musicians.

There are so many ways to make music a part of children’s lives—formal music lessons, singalongs, campfire drum circles or even just listening to great recordings while making supper or doing homework—and their lives will be all the richer for it.

Music programs like those at School of Rock provide students with an incredible variety of benefits, from increased persistence to better memory function to superior abstract reasoning.

In some ways, it’s easiest to see the connection between music and cognitive development in early childhood because children are growing so quickly and hitting milestones in such quick succession. However, every age of child can benefit from the helpful effects of music on the brain.

At School of Rock, we begin by exposing our youngest students to the wonder of making music through our Little Wing program, and guide them into seasoned young performers who have made music a major part of their artistic and intellectual lives. 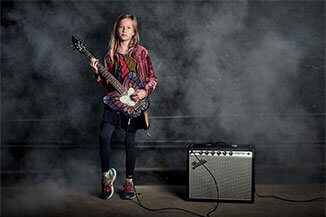 What Is the Best Age to Learn to Play Guitar? 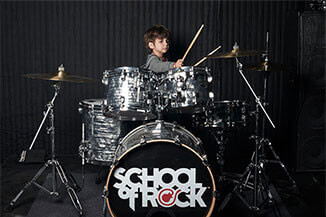 What Is the Best Age to Learn to Play Drums? 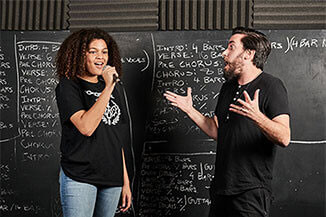 What Is the Best Age to Learn to Sing?

Best Age to Learn to Sing 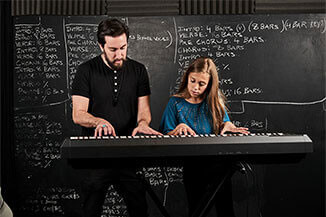 What Is the Best Age to Learn Piano? 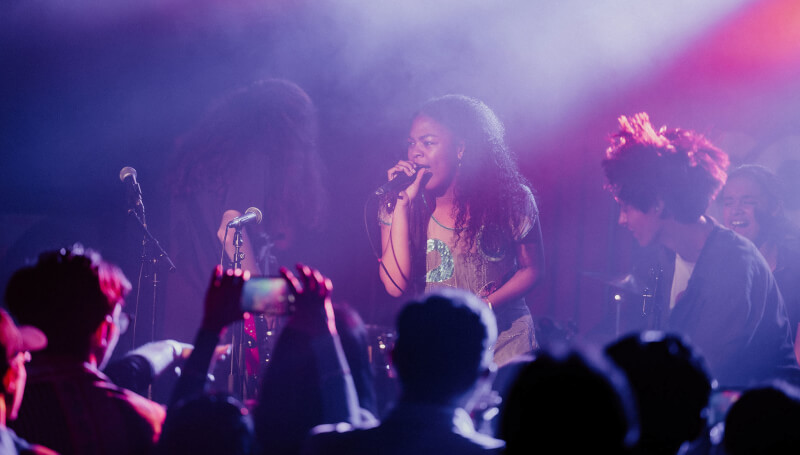 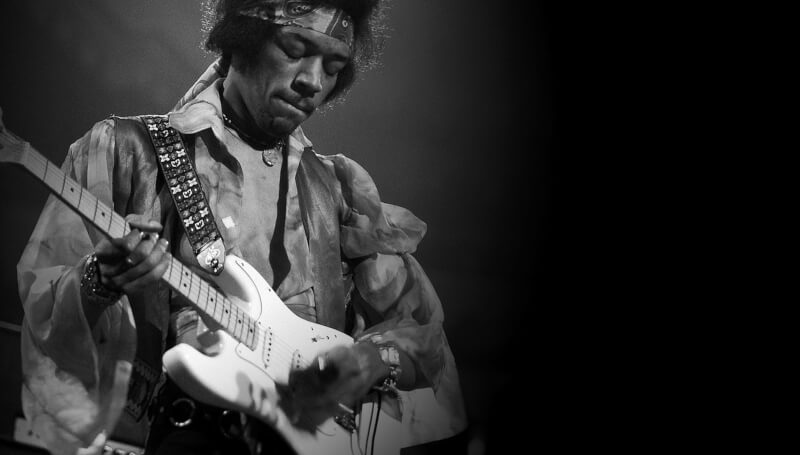 9 Black Musicians that Changed the Industry 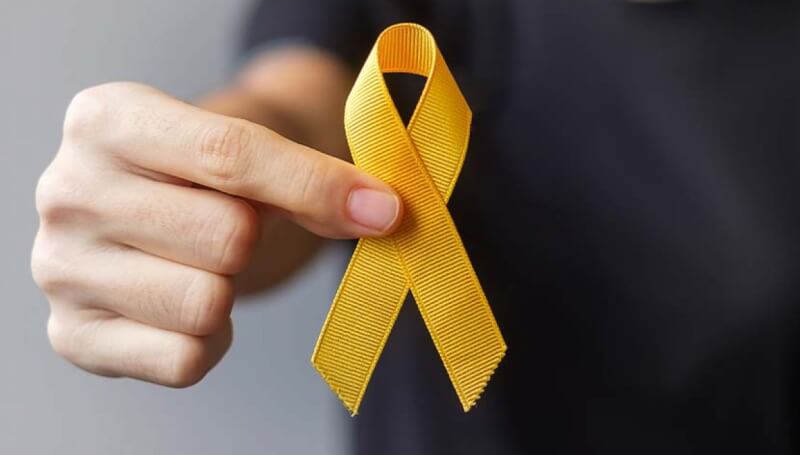