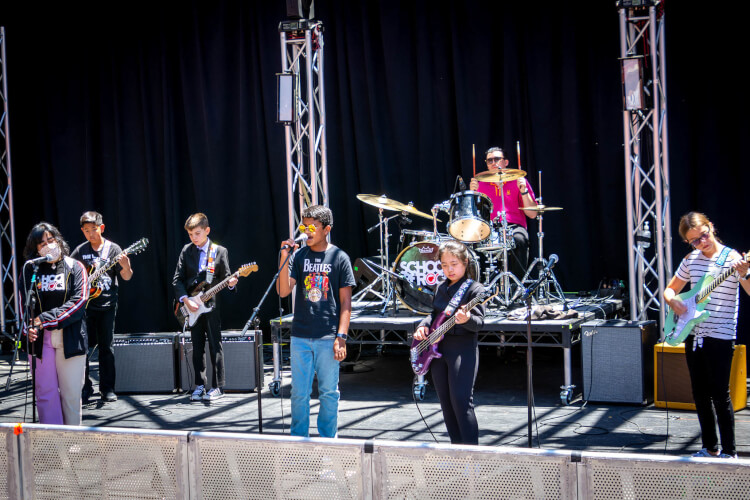 The information below is for the Fall 2022 season.

We’re currently enrolling in all programs so don’t wait to get started! If you're new to our school, enter your info on this page to get started on your journey to becoming a musician.

Enrollment is open now for our Fall '22 Performance Program and Rock 101 groups! New students, enter your info using the form linked above. Current School of Rock students, fill out this form to sign up.

The Performance Program is School of Rock’s flagship program for students ages 10 through 18, and it combines a weekly private lesson with a weekly rehearsal. At the end of each season, we put our students on stage in a real rock venue to amaze their family and friends with an awesome rock show!

New Wave was the name given to the style of pop music that emerged after Punk Rock in the late 1970’s and 80’s, and it was one of the first genres to dominate MTV with its stylized approach, electronic sounds, and catchy hooks. This show will feature hits from artists such as The Cure, The Smiths, Blondie, and Tears for Fears. Recommended for all students!

Green Day has written and recorded numerous hit songs, and remained relevant to generations of young people with their blend of punk, pop, and rock elements. We’ll have tons of rock anthems, punk rock classics, and a few ballads to choose from in this show. Recommended for all students!

Black Sabbath formed in the late 60s in Birmingham, England, and their first two albums, Black Sabbath (1969) and Paranoid (1970) defined the sound and style of heavy metal and inspired generations of musicians. This show will feature killer guitar and bass riffs and thundering drum fills, as well as a selection of keyboard and vocal parts. Recommended for students at all levels who are ready to rock out!

90s alternative squares off against 2000s alternative in this show as we play songs by local legends No Doubt (Anaheim, CA) and Paramore. This show will have a lot of fun vocal and instrumental parts in the high energy, catchy songs these two groups released. Recommended for all students!

In this show, we’ll study a classic era of Blues and Soul music, featuring artists like Stevie Wonder, Sly & The Family Stone, The Supremes and the Jackson 5. This music has a lot to offer students developing their groove and learning how some of the best pop and rock arrangements in the history of modern music work. Recommended for all students!

Michael Jackson and Prince were both pop/rock icons, writing and releasing some of the biggest hit songs of all time. Students in this show will have the opportunity to get inside the workings of true masterpieces of modern music. Recommended for all students!

Led Zeppelin’s music combines elements of blues, hard rock, psychedelic, and folk into an unmistakable sound that has generated some of Rock and Roll’s best loved anthems. This show is a good opportunity for students who are ready to put in the practice time to level up their musicianship. Recommended for students who have some playing experience already.

We're scheduling these groups individually for each student. Current families, your weekly lesson and rehearsal time will stay the same for the Fall season unless you let us know you'd like to change times. New families, get in touch and we'll help you get started!