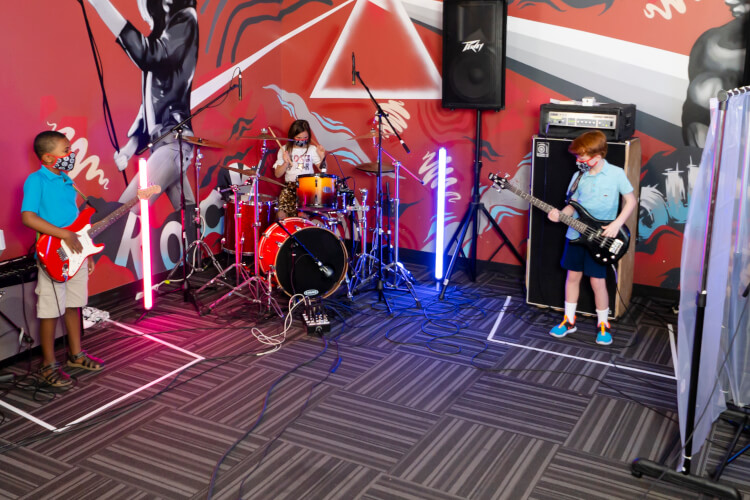 School of Rock Portland is Now Enrolling for Spring Season!

This show will focus on the Pop Legends that have topped the charts over the last 50+ years. This will be a fun and challenging experience that will showcase a wide range of music and songs we all love to sing along with by artists like  The Beatles, Madonna, Taylor Swift, Britney Spears, Elton John, Prince, Beyonce, Adele, Lady Gaga, Justin Bieber, and more!

Platform boots, glitter, jumpsuits, and all the makeup combined with larger than life stage personas are the embodiment of all that was Glam Rock. This genre dominated airwaves in the late 1960s with bands who pushed the limits of rock fantasy. We’ll be focusing on notable artists of this super-style such as David Bowie, T. Rex, Lou Reed, Iggy Pop, New York Dolls, Roxy Music, etc. This show is bound to be ridiculously cool and musically educational.

This show will honor two American icons in the world of funk, soul, pop and R & B. Aretha Franklin, hailed as “The Queen of Soul,” and Stevie Wonder, who has sold over 100 million records and has taken home 25 Grammy’s. This show will dive into the music of these two incredibly talented artists  who both showcase powerful and emotional vocal delivery as well as songwriting and lyrical prowess. You’ll be able to get down performing songs like "Signed, Sealed, Delivered I'm Yours", “Chain of Fools”, “Respect”, "Superstition", “Think” & “Higher Ground”.

Calling all students looking for a challenge! Frank Zappa was a composer, multi-instrumentalist, innovator, filmmaker, bandleader, and all around eccentric who forever broadened the scope of music and limits of society.  His sarcastic and satirical persona mixed with his passion for experimentation and nonconformity created a massive catalogue that spanned over four decades. Zappa was a Rock musician, but his work traversed countless styles and genres from rock to pop to progressive to classical to jazz, and beyond. This show will feature songs, such as: “Cosmic Debris”, “Don’t Eat the Yellow Snow”, “Inca Roads” and “St. Alfonzo’s Pancake Breakfast”. * Please note that this show may contain mature and objectionable subject matter.

Do you look just like Buddy Holly? When Weezer first formed in 1993, they sent their demos to the soon-to-be producer of the Blue Album (and former Cars frontman) Ric Ocasek who said the music felt a little like metal but the lyrics were smart and nerdy, the songs were catchy, but the sound was powerful and super loud. More than 25 years later, Weezer continues to be an enigma, a blend of big, joyful arena rock with shy-guy reticence, goofy humor with obsessively precise pop craft. This show will rock out to Weezer favorites like “Undone - The Sweater Song”, “Island in the Sun”, “Buddy Holly”, “Say it Ain’t So” & many others!

Hair Metal is one of the most rockin’ shows we have in our repertoire! If you’re into heavy metal or hard rock with a sprinkle of catchy hooks and guitar riffs and killer vocals, then this show is for you. We’ll be playing music from Hair Metal greats like Motley Crue, Poison, Guns ‘n Roses, Ozzy, Van Halen, Skid Row, Quiet Riot, Lita Ford, Def Leppard, Bon Jovi and more. Now’s the time to start growing your hair out!

Seattle has long played a major role in the musical culture of the US, popularizing genres of alternative rock such as grunge and being the origin of major bands like Alice in Chains, Soundgarden, Pearl Jam, Nirvana, Foo Fighters. And don’t forget classic rock faves, Jimi Hendrix and Heart. The city remains home to several influential bands and labels that we will also be showcasing, such as Death Cab, Mudhoney, Sunny Day Real Estate, Tacocat & Sub Pop Records.

California's role in the history of Punk is rich. In this show we'll explore the many bands involved in shaping that history, as well as some more current bands a part of the still thriving scene.  Hardcore Punk originated in California with bands like Circle Jerks, Black Flag, Adolescents, T.S.O.L., and Agent Orange. In addition to the hardcore punk godfathers, expect music from Dead Kennedys, NOFX, Suicidal Tendencies, Descendents, Minutemen, Reel Big Fish, Social Distortion, Offspring, Goldfinger Pennywise, Bad Religion, Rancid, and more!

The Monterey Pop Festival was a three day music fest that took place the summer of 1967 and is considered to be the start of the "Summer of Love '' and the debut of the Hippie movement. Featuring many historic performances, it became an inspiration and a template for future music festivals, including Woodstock two years later. This show will feature iconic artists that graced the stages of the Monterey Pop Festival, including Grateful Dead, The Who, Otis Redding, Jefferson Airplane and The Jimi Hendrix Experience.

Through his ten feature films, Quentin Tarantino has successfully created his own unique cinematic style and niche, while becoming a major force in popular culture along the way. The soundtracks of each of his films are unusually rich with songs from our past. He is extremely skilled at finding the perfect song to capture the moment and bring the audience into the experience. This group will perform assorted songs from his film soundtracks including Pulp Fiction, Jackie Brown, Reservoir Dogs, Once Upon a Time in Hollywood & more!

ROCK 101 - FOR BEGINNERS AGE 7-12. HAVE A WEEKLY PRIVATE LESSON & PLAY IN A BAND! CONTACT US FOR IN PERSON & REMOTE CLASS TIMES.

ROOKIES - FOR 6-7 YEAR OLDS WITH NO MUSICAL EXPERIENCE REQUIRED. LEARN MUSIC FUNDAMENTALS AND EXPERIMENT WITH INSTRUMENTS.