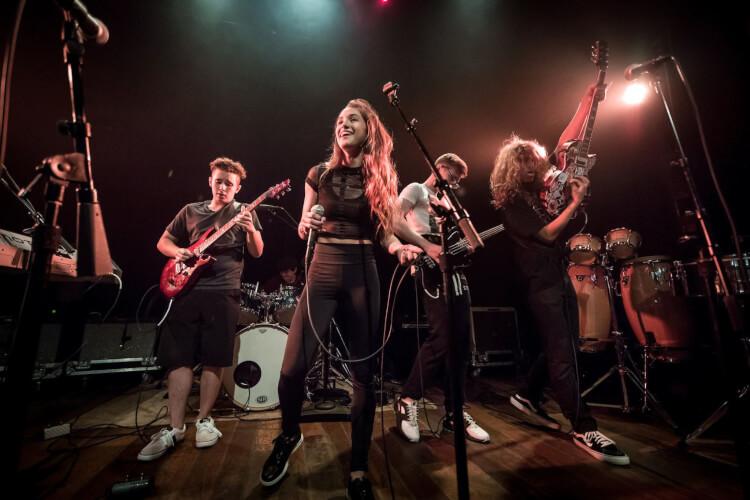 The first question people ask about School of Rock is which came first: the school itself, or the 2003 movie? Originally launched as a single location in Philadelphia in the late ‘90s, School of Rock has developed into a trademarked brand and global phenomenon, operating performance-based music schools around the globe. When the movie made its way to the box office years later, we were proud to see that the charismatic, fun-loving, and inspiring protagonist, Dewey Finn, played by Jack Black, embodied the same values that exist in every School of Rock location across the world. Here are five reasons why Jack Black’s Dewey Finn would fit right in at the real School of Rock.

As educators, we are responsible for cultivating an inclusive, supportive, and positive environment for one another. Much like Dewey Finn’s diverse classroom at Horace Green Prep, our students, parents and staff celebrate each other's differences and are united by our love of music. Let's reminisce on the beautiful moment when Dewey Finn reminds his student, Tamika, that she can be a star based on talent, not physical appearance. That iconic scene brings us to our next point, which is…

2) He loves Aretha as much as we love Aretha

As Jack Black’s Dewey Finn first said back in 2003, "You've heard of Aretha Franklin, right? Okay, she's a big lady. But when she starts singing, she blows people's minds. Everyone wants to party with Aretha!". While we focus largely on Rock and Roll, we wouldn’t be a true music education program without teaching our students that Rock music’s roots can be found in many genres, including soul. That being said, where would we be today without ‘Queen of Soul’ herself, Aretha Franklin, an iconic figure for musicians and music lovers alike. You could say we party with Aretha pretty often.

3) He’s passionate about Rock and Roll

Throughout the School of Rock movie, Jack Black’s Dewey Finn pays tribute to numerous iconic Rock and Roll bands including AC/DC, Jimi Hendrix, Blondie, Pink Floyd and more. Rock’s originals still speak to us in their music and lyrics, and when our students perform those classic tunes live, they connect with the spirit that fueled the genre.

4) He is dedicated to his students

Jack Black’s Dewey Finn is more to his students than just a music teacher. He sees them through tough conversations, supports them through challenges, inspires them to be themselves, reminds them to fight for what they believe in, and pushes them to achieve new goals. This is what our teachers bring into our rehearsal and lesson rooms every day across our 300+ schools. We love that J.B. shows the world the kind of support system our community gets at the real School of Rock.

5) He reminds us that through hard times, music can still bring us together

Despite all of life's speed bumps, Jack Black's Dewey Finn reminds us all that the true power of music is its ability to bring people together. This is proven every day in our schools, when we see our students connect on a song they love, an artist they admire, or lyrics that inspire them. The students that walk through our doors, or who enroll in our online lessons, are given the chance to be a part of a band, form friendships with those they may have never met, and work towards a larger goal as a unified team.