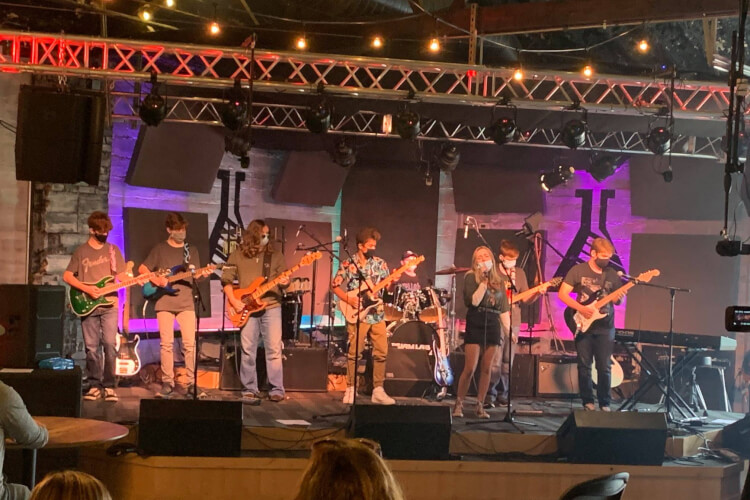 Still enrolling for some instruments in Spring Rehearsal Groups!

When rap-metal pioneers Rage Against the Machine exploded onto the scene —with manic guitars and incendiary rhymes blazing, and a fierce combination of classic rock, hip-hop and punk. Formed in 1991, the group is Zack de la Rocha, Tim Commerford, Tom Morello, and Brad Wilk. Their songs express revolutionary political views and keep you on the edge of your seat kinda attitude.

The Red Hot Chili Peppers formed in Lo1983 with highschool friends Anthony Keides and Flea.  Although the members have changed several times, their most classic lineup includes Chad Smith on drums and John Frusciante on guitar. Their well written songs incorporate elements of alternative rock, funk, punk rock and psychedelic rock with a narrative of Keides’ life.

Both bands hit the stage and let out relentless energy from first stick to the last note.  And don’t be fooled, they were both influenced by so many of rock’s masters that it is often deceptively difficult to play.

Perhaps the greatest vocalist of the modern era of music, Aretha Franklin - hailed as “The Queen of Soul” - possessed a powerful voice capable of expressing emotion like few others. She was a gifted interpreter of other people’s work, often putting unique soul, funk, and gospel spins onto songs originally done by rock artists. But Aretha was also an amazing songwriter in her own right, an underrated piano player, and gently pushed all of her musicians to play their best. This is a challenging show for all musicians.  You will learn how in studio contributions of acclaimed musicians such as Duane Allman, Billy Preston, Stanley Clark, King Curtis, Bernard “Pretty” Purdie, and “Blue Lou” Marini added to her amplified the aura of her songs.

Join us for a jump across the pond to the UK in 1968, two bands emerge as pioneers of Heavy Metal.  Enter Deep Purple, a psychedelic rock and progressive rock band that shifted to a heavier sound with their 1970 album Deep Purple in Rock.  Then comes Black Sabbath, known for adding the Devil’s fifth to their chord repertoire, and a reputation that often matched the mysterious chords.  Both bands were so prolific, that their work spawned so much throughout the 70’s, 80’s and beyond.  We plan to expand our material to include Rainbow, Ozzy, Ronnie James Dio, and so much more!