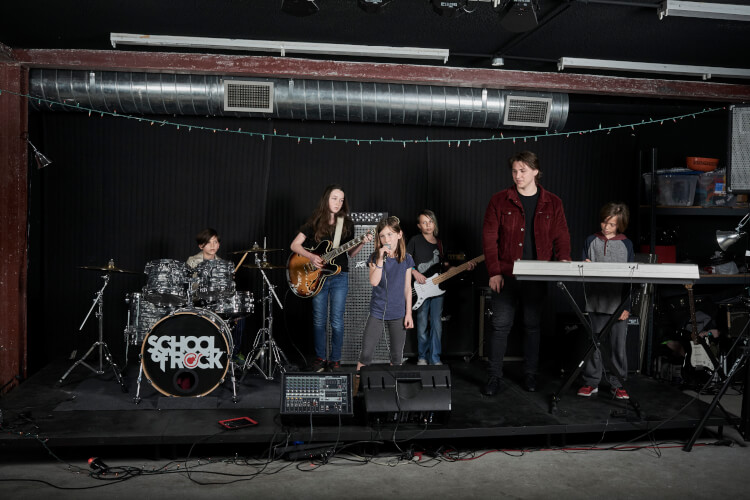 Jake's Take - Making the Most of Rehearsal

Making the Most of Rehearsal

In high school my bands would rehearse several times a week for as many hours as we could.  When I got to college, rehearsing weekly was nice but scheduling conflicts started coming up more and more.  Post-college, we’d book the rehearsals when we booked shows, finding a few 2-3 hour blocks where we could. Finding extended periods of time to rehearse which also fit into everyone’s schedule can get very difficult, and the problem is amplified the larger your band is.  I often find myself envious of the students at School of Rock -- it’s so cool to have dedicated time to get together with 10-15 other musicians and just spend time making music. That is a special time, a time that will become harder and harder to replicate in the future.

So the question is -- how do you take this rehearsal time and make the most of it? Whenever you’re in a group, the importance of preparation is magnified.  If you have 5 bandmates, and you spend 30 minutes bumbling through a song because you didn’t practice, you didn’t just waste your 30 minutes -- you wasted all of their 30 minutes too.  That’s 3 hours down the tube. So what are the things that we can do, not just to prepare ourselves for a good rehearsal, but also to help our band be productive? Today I’m going to run us through 3 concepts: learning music “from the ground up”, preparing to adapt the music to fit your band, and practicing while keeping backup plans in mind.

Learn your parts from the ground up

Everyone knows that they’re supposed to learn their songs, fully and accurately, to be ready for rehearsal. But that’s not always going to be feasible when you have a lot of songs, or a very difficult song, or are working under a time crunch.  If we take a “ground up” approach to learning our songs, we can at least have something useful to play in the rehearsal that will keep us on track, even if we are not fully prepared.

Let me first explain what I mean by “ground up”.  Learning something from the ground up means learning the foundations of a song, before diving into the intricacies.  If a bass player can come in and play root notes all the way through the song, that is far, far, more helpful to the band than a bass player who learned just the notes in the tricky first verse section.  A group of musicians playing root notes and basic chords with a basic drum beat will sound much better than a group of musicians who can play some sections perfectly, but is unable to get through the whole song.

A very simplified breakdown of where each instrument should be starting and where they should be working to could look like this:

Try this approach next time you’re learning new songs and see how it changes your preparedness for rehearsals. Try to be knowledgeable about just the basics -- for every song, for the entire song -- before working on to the next level.

Adjust the piece to best fit your band

When doing covers, it’s very common to need to make adaptations to a song for it to fit your players.  Transposing a song to fit your singer’s range is the most prevalent example, but being able to revoice odd parts onto the instruments you have, or work around flashy studio effects that don’t play well live, can also save tons of time.

Many drummers have languished in rehearsal as the guitars and keys and vocalist all try out a bunch of different keys to find what works.  The process of finding the right key can be expedited for everyone if, while preparing, everyone thinks about the song in scale degrees. Understanding a song as a I, IV, V in C (rather than C, F, G) makes is much quicker to move into a new key if the vocalist should ask for it.  This is the primary concept behind the Nashville Number System which is a tried and true staple of cover band musicians and session players.  By knowing songs as intervals, session musicians can transpose the song quickly into new keys for the vocalist to try out.

On an initial listen of a song, I’m always keeping my ears open for anything out of the ordinary which might prove harder to pull off.  If you’re hearing a song with a horn section, start thinking about how that could be rearranged to a guitar. Could an arpeggiator part be done with a loop pedal? Could a big choir part become a string patch on a keyboard?  You have to work within the logistical constraints of your gear and personnel. If you can get ahead of those strange parts creatively you’ll save a lot of trial and error time in rehearsal and keep things moving forward.

In an ideal world, everyone in the band knows every song perfectly, and just gets up and plays the whole thing all the way through.  Obviously, that doesn’t always happen. Sometimes you can’t hear a cue in your monitor, sometimes equipment fails, sometimes your crowd surfing vocalist doesn’t make it back to the stage on time. But, if you establish some agreed upon ways to communicate with your band, you’ll have increased resilience to any stage mishaps that will eventually happen.  Head nods, dipping the guitar neck, making eye contact - any of those can be useful cues to your bandmates, but most need to be given context beforehand. When you’re practicing, think about which cues are important to you in which sections, or which sections can be repeated to create more space if needed - and go into the rehearsal ready to share these ideas with your band.  If you have backup plans in place, things go much much smoother on stage.

Having good awareness of the situation and being able to adapt on the fly to mishaps is great for keeping the show on track, but you can take it further to create a more unique and memorable experience for the crowd.  If people are really into a solo, what is the cue to give the guitarist more time? If people are singing along with the lyrics, how can you open it up and do a crowd call-and-response section? Some of the most powerful moments in live music are those sorts of things, and those adaptations don’t work at every concert.  You need to be able to gauge when a change will play well and when it won’t. Being able to make these adaptations starts in the practice room.

Try these when preparing for your next rehearsal and see how it goes.  If all goes well, you’ll be able to maximize your time in the rehearsal room and get your band sounding tight as fast as possible.

As always, feel free to reach out with comments or questions.