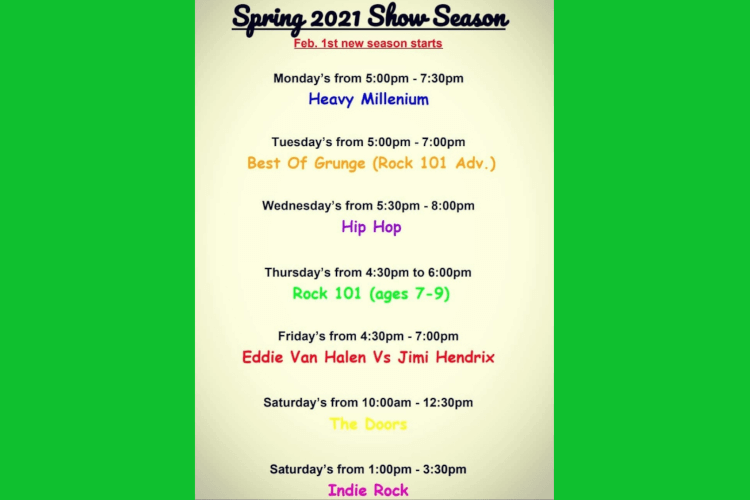 BEST OF THE GRUNGE

Grunge (sometimes referred to as the Seattle sound) is an alternative rock genre and subculture that emerged during the mid-1980s in the American Pacific Northwest state of Washington, particularly in Seattle and nearby towns. The style became known as a hybrid of punk and metal. We will dive into some of the awesome music from bands like Nirvana, Sound Garden, Pearl Jam, Stone Temple Pilots and so on. This show will also be geared for a younger age group of kids.

“We all come from the damn blues,” Chuck D of Public Enemy said in his Rock & Roll Hall of Fame induction speech. Hip Hop has proved itself to be historically rooted from jazz, blues, funk, disco, and rock and roll, from the funky disco-inspired early years of Kurtis Blow and Grandmaster Flash, to the rocking influence of the Beastie Boys. Vocalists will be the center of attention for this show, as they will study the concept of flow per era of hip hop, as well as shortcuts to lyric memorization. Students will also get the opportunity to understand the concept of sampling, and recreate the samples that each song contains. Also very fun for keyboardists, bassists, and especially drummers.

Rock 101 is one of School of Rock’s major programs for kids and beginners. It combines our core philosophy of performance-based music education with a unique curriculum designed for kids with no previous musical experience. Students have one weekly group rehearsal where they learn classic rock songs that have been simplified specifically for beginner musicians. These rehearsals get young musicians to learn the fundamentals of their instrument while playing with a band in a positive and fun atmosphere. Students also have a weekly private music lesson with an instructor who will help them rehearse performance songs while teaching them foundational music skills and concepts.

Jimi Hendrix, the Voodoo Child from outer space and the Atomic Punk from southern Cali. Two of the most influential guitarist in the history of music. Join us on Fridays at 4:30 where we explore and study the music of these two giants. Though Jimi and Eddie always stood way out in front, they also had killer bands behind them. So this show isn’t only a challenge for guitarist but all musicians who come along for this sonic journey. Hope to see you all on Fridays where we will pay tribute to The Lords of the Strings

REHEARSAL: SATURDAYS FROM 10-12:30 STARTING THIS FEBRUARY!

The Doors were an American rock band formed in Los Angeles in 1965, with vocalist Jim Morrison providing a deep rich voice with poetic lyrics and keyboardist  Ray Manzarek fusing rock and jazz into the chords to create amazing psychedelic tones.  They were among the most controversial and influential rock acts of the 1960s, and the group was widely regarded as an important part of the era's counterculture. This show is certain to bring out each students creative and inspirational side to their playing.

In our Indie Rock show, we will look at all the bands that have legacies in their independent years such as the Arctic Monkeys and The Smiths, along with indie bands that have pioneered new instrumentations in their catalogue, as well as new styles of guitar playing. Bands like My Bloody Valentine, Neutral Milk Hotel, Sigur Rós, and American Football have used unashamed methods of wonky tunings, using musical saws, bowed guitars (like Jimmy Page), and the glide guitar technique. This will be a show suitable for all experiences, as we will look at intricate solos, difficult arpeggios, to some easy and blissful shoegaze.