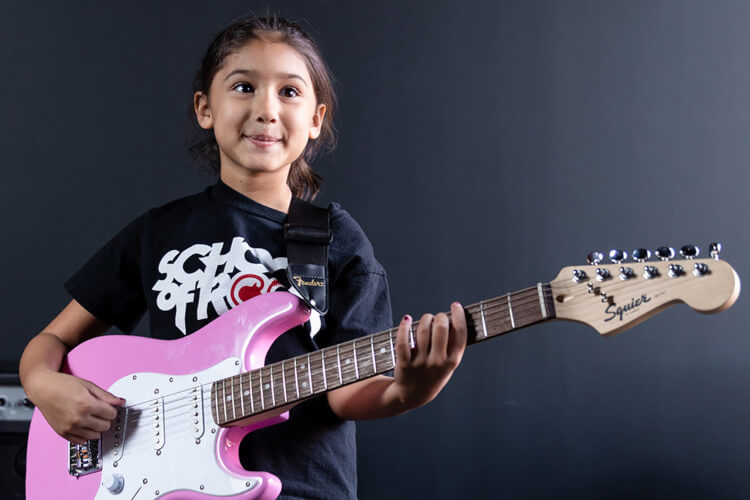 You pick up your guitar, get your fingers and guitar pick ready, when you start to wonder, “what do I play? Where do I start?” Some of the basics that guitarists learn from the beginning are chords. What are chords? Chords help create harmony in music. Without them, there wouldn’t be much rhythm and music itself would feel incomplete. Most popular instruments play them with the exception of drums and bass as they pertain to the beat, tempo and adding depth to the harmony. Let’s look at different guitar chords for beginners, tips and tricks on how to play them, and what songs we can start playing.

With the School of Rock method of teaching, students will take what they learn in the lesson room to start performing in front of a live audience. Students will learn how to play the parts of lead or rhythm guitarist. Lead guitarists focus more so on the melody, riffs and guitar solos while rhythm guitarists play chords and use different techniques such as strumming and fingerpicking. Whether you’re doing either technique, learning chords for both is highly essential. If you’re thinking of getting your first guitar or getting a new one and don’t know what to look for, here is a brief guitar-buying guide that can give you some good tips.

Chords may be challenging for beginners, as there are different types of chords and various ways to play them. There are three standard types of chords.

Power chords are some of the first few chords that you’ll learn at School of Rock. Power chords are very common as they are used in rock, classical and modern music today. Power chords are known to be easy for beginners as they focus on two or three strings and frets which makes it easier on the fingers and therefore, easier to play. They can be played on any type of guitar but are more primarily used for electric. When power chords are played on an electric guitar, sounds can be distorted to add more depth and color. You can do this with other chords as well, but power chords really set the mood of the song that you’re playing.

Open chords are great for beginner players as some of the strings are opened in the chords. Open chords are similar to power chords as they focus on fewer frets, using less fingers and making it easier to play. The only difference is that open chords use all the strings. Your left hand, which you use to fret down on the string, is not used for every string. The common open chords are called CAGED. We’ll look at what those chords are soon and how to play them.

Barre chords are very different and tend to be a bit trickier than power and open chords. They are very useful because as you get more skilled and equipped with the guitar, you’ll be able to take the position/shape of the chord and move it up and down the frets to create new chords. In a sense, they’re easier to switch between because you don’t have to change the shape of your fingers, only to move the fingers up and down your guitar. However, they’re known to be hard for beginners because most barre chords focus with one or maybe even two fingers holding down the same fret on different strings at the same time. We’ll focus on these types of chords another time.

Before we look at any open chords, we want to make sure our guitar is fully tuned so when we start playing, the notes will be in key. If you’re having trouble with tuning your guitar, here is a brief article that can give you some good tips to make sure your guitar sounds good before you start playing: https://www.schoolofrock.com/resources/guitar/beginners-guide-to-tuning-a-guitar. 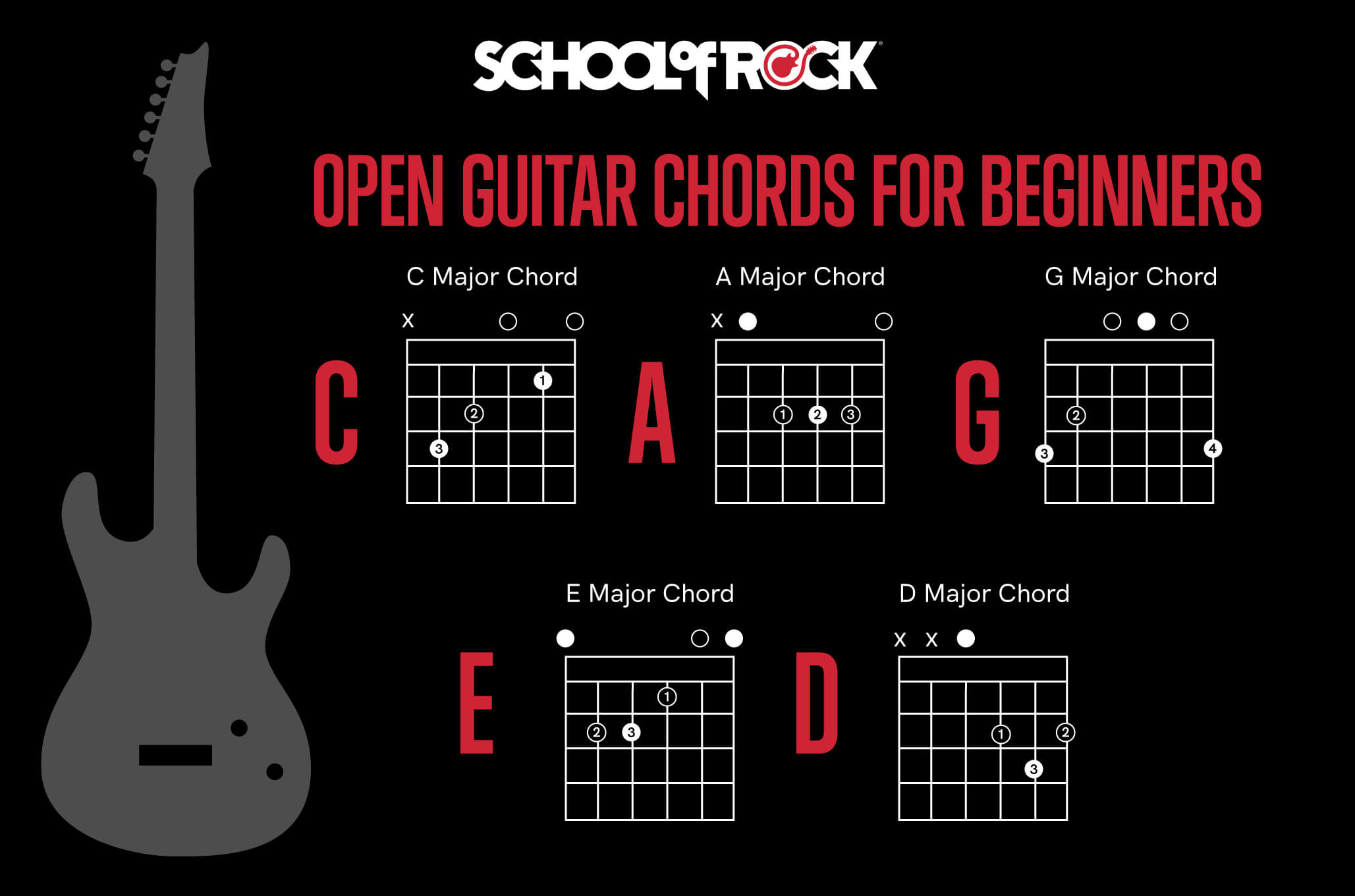 Now, let’s look at open chords like CAGED and see how we can play them. CAGED is used in the School of Rock performance-based method because the majority of the songs that students perform will use these chords. Each letter in the word CAGED stands for a chord. All of the chords are shown below in a chord diagram.

A chord diagram shows what strings are being played, what frets are used, and which fingers are on each fret. The diagram is read horizontally. The first line is your low E string and the last line is your high E string. Think of it as if you’re holding the guitar upright in front of your face. The x stands for muted strings which means it’s not played at all. The O, or circles on top, stands for an open string which means no finger is on any fret on those strings but it’s still being played. The numbers are on particular frets but they don’t represent the fret that is being played on. The numbers represent which finger is on that fret: 1= index finger, 2= middle finger, 3= ring finger and 4= pinky. You want to figure out what fret it’s on by looking at the box from the top to down. The first box represents the first fret and so forth. As an example, in the A Major chord, all the frets are on the second fret. However, your index finger is on the second fret of the D string, middle is underneath, and ring finger is underneath that. 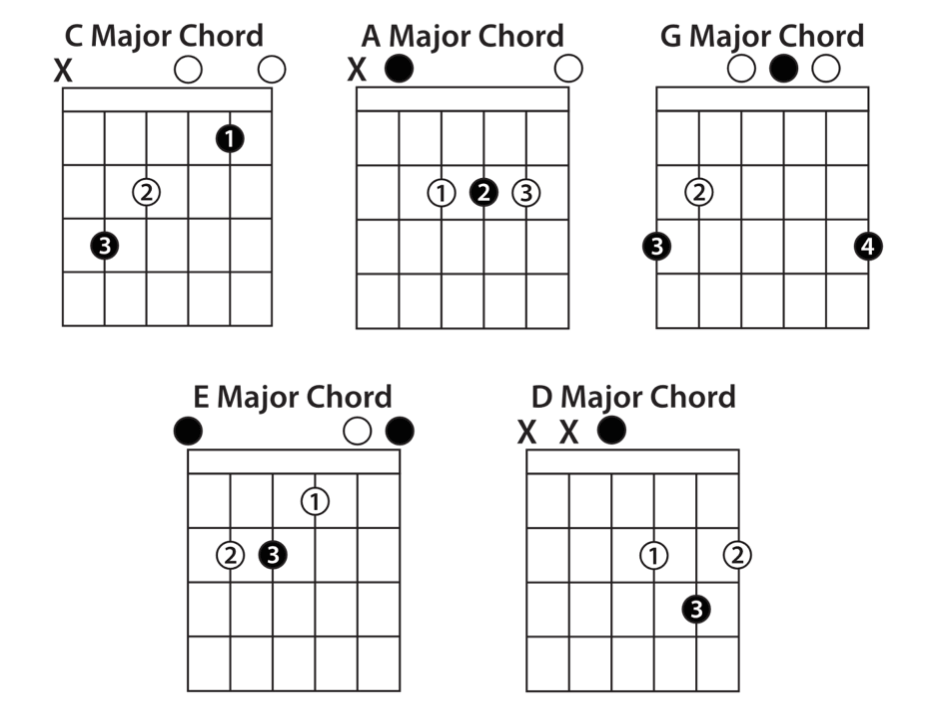 Besides CAGED, here are some other chords that are commonly used and are easy for beginners.

A chord diagram is read a bit differently than tablature. Tablature is used to help guitarists by reading notes and finding where that note is on the guitar. When it comes to tablature, the lines represent the strings and are read vertically as shown below. The bottom line represents your lower E string and top represents your higher E string. As you go up on the Tablature, it’s as if, when you’re holding the guitar, you’re going down on the strings. The numbers on the TAB represent which fret you’re playing. O stands for open string and the numbers stand for frets. Therefore, even though both diagrams look different, you don’t want to confuse reading a chord diagram the same way you read TAB and vice versa.

Chord diagrams are super useful as they not only show you how to play the chords but they show you the correct fingers to use to play the chord so it’ll make it easier to transition between them. The more and more you practice, the more they’ll be committed to memory and you’ll no longer have to look at the diagram. As you’re learning these chords and/or new chords, you always want to follow these tips:

Now that we have gone over some basic guitar chords, how to read chord diagrams, and tips to practice, we can look at some songs that we can use these chords in. Some songs that can be used with the CAGED and some minor chords are:

Other Popular Songs for Beginning Guitarists:

Power chords are easier than open guitar chords but are very similar to barre chords. How? Compared to open guitar chords, power chords have less notes which means they use less frets and fewer strings. However, the chords for both are very similar. Before it gets more confusing, let’s look at it a bit more deeply. Let’s think of an example of an A major chord and an A5 power chord. The A Major chord has the notes A, C# and E. The A5 power chord has the notes A and E. The A Major chord focuses on the root, third and fifth while the A5 focuses on the root, fifth and octave (same note as the root). In essence, they are almost the same chord. The only difference is the power chord doesn’t have the third. Also, when it comes to power chords, they are neither major or minor. The third in a chord is what determines if it's major or minor. Since a power chord doesn’t have the third, they can be used where a major or minor chord is called for. When practicing on your own, see if you hear the difference between an open and a power chord.

Compared to barre chords, power chords are very similar but are easier to play. Power chords can be played in many different ways. They are three string power chords which can be played like a barre chord using the barre technique. What is the barre technique? You do it by holding down with one finger two frets on different strings at the same time to give it a “finger barre.” This is a great way to start working your way up to barre chords by practicing barring two strings first to work your way up to barring all the strings at once.

What types of music can you practice with power chords? Classic rock music and even some pop music today focus heavily on power chords. In the SoR Rock 101 program, beginner guitarists would learn power chords for this type of music. What are some songs that they use and that you can practice with?

Now that we’ve looked at some guitar chords for beginners, what songs can we learn how to play? Are you interested in putting it to use? Or do you need a little guidance? Luckily, the School of Rock can assist you. The SoR has private music lessons and different music programs to help you start on the right foot. Certain programs like the Rock 101 and Performance program help beginners and intermediate players to take what they learn in their private lessons to start learning how to perform full songs as part of a band. Through these programs and lessons, students learn how to grow as talented musicians through life lessons, experience and teamwork. The songs mentioned in this article are learned in some of these programs. They help you learn open guitar chords, power chords, while also teaching you music theory as well. If you’re interested in learning more, contact the closest School of Rock location near you to find out more.

Miranda Morales is a guitar and keyboard instructor at School of Rock Easton in Pennsylvania.