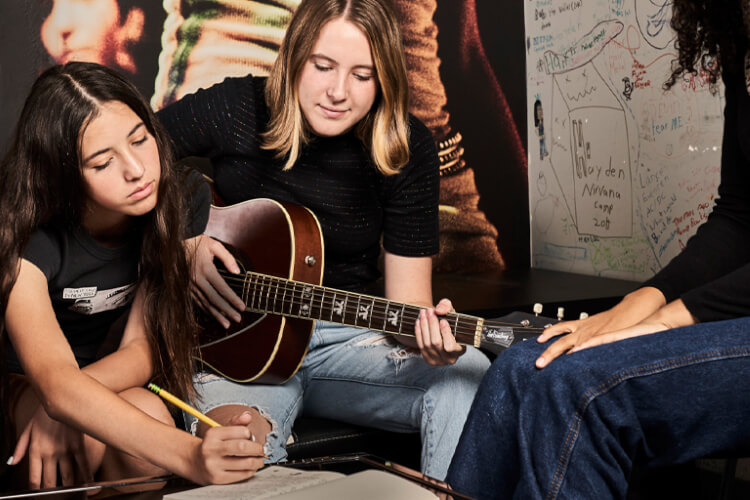 7 Legendary Songwriters Who Changed the Game

Maybe it’s the person who writes a melody that burrows into your mind and refuses to leave... You know the one; it’s the one you can’t stop humming, the one that lives rent-free in your head for days or weeks and somehow never gets old, and still delights you when it pops up again months or years later. Maybe it’s the person whose lyrics are as perfect when read as a poem as they are when sung; the lyrics that yank you out of your own reality and into theirs as though you’ve lived there your whole life.

No matter which side you land on, you can’t deny that some songs just hit differently, and for that matter so do some songwriters. And while nobody can ever determine who’s the best songwriter, there are some names that stand out - people whose work echoes across the entire spectrum of recorded music and whose careers have set new standards for musicians everywhere.

It’s hard to imagine a better place to start than Prince (formerly known as The Artist Formerly Known as Prince). The Minnesota native had the kind of career that most artists only dream of, one marked by near-absolute creative freedom. The resulting catalog is almost inconceivably large; over the course of his lifetime, Prince released 39 albums of material, almost all of which feature him playing nearly every instrument. It’s estimated that there are still dozens of completed albums in his vault (not songs, albums) which are slowly being organized and released by his estate, a process which will likely see new Prince music being released for decades to come.

Filled to the bursting with catchy riffs and ultra-danceable grooves, Prince’s full body of work includes rock, funk, R&B, jazz, new-wave, disco, and numerous subgenres... and really, that’s only the work that we actually know about so far. Who knows what else he still has to give us?

No list of the world’s most influential songwriters could be complete without at least one Beatle, and Sir Paul McCartney is a force all his own. Recently the subject of a Hulu documentary/interview about his career (led by legendary producer Rick Rubin), McCartney has been an international superstar for longer than many musicians have been alive.

As well-documented as it is, there’s still no real way to explain the full effect of Beatlemania to anyone who didn’t live it, and there are fewer and fewer people around who got to experience it firsthand. McCartney (along with bandmates John Lennon, George Harrison, and Ringo Starr) created a musical sound that evolved dramatically over the course of their ten-year career, with each album essentially creating a genre and scene all its own. It’s not a coincidence that most of the people you know have a favorite Beatles album rather than just a generic “I like the Beatles''; while there are consistent earmarks (three-part harmonies, surprising melodic twists and key changes) throughout the band’s catalog, their style changed so much over the years that it’s nearly impossible to find someone who doesn’t have at least an inclination toward one album over another.

In the wake of the Beatles’ mountainous success, Sir Paul never slowed down. His post-Beatles career has been marked by hits like “Jet,” “Band on the Run, and “Maybe I’m Amazed,” not to mention collaborations with everyone from Stevie Wonder to Kanye West. McCartney is another songwriter who’s experienced a great deal of freedom to explore, and his work has taken him everywhere from hard rock to bossa nova.

It’s great to look backward, but sometimes you need a blast from the present, and it’s hard to imagine a bigger blast than Billie Eilish. With dark, brooding lyrics underscored by a voice so quiet it often seems like she’s almost whispering into the microphone, she’s tapped into a Gen-Z energy that’s not afraid to cut its own path.

By age 19, she’d already won seven Grammy awards, four of which were picked up in one swoop in 2019. She became only the second person ever to sweep the “big four” (Best New Artist, Record of the Year, Song of the Year, Album of the Year) all at once, and is the youngest person to have ever done so. Who knows what’s next?

Have you heard reggae music? Well, you can more or less entirely thank Bob Marley. He didn’t invent it, strictly speaking, but he was one of its early pioneers and definitely became the most internationally-recognizable reggae musicians of his day - and for most people, he’s never been eclipsed.

Marley’s enduring legacy isn’t just catchy hooks and good vibes, or simple songs that are easy to remember. He also brought Jamaican culture - actual Jamaican culture, not just pretty beaches and tourist attractions - into the ears and eyes and hearts of the entire world. Some of his most notorious earworms have brought attention to issues like poverty and political oppression, always with his trademark stamp of peace and love for all.

With a storied career that spans over 65 years, Dolly Parton hasn’t so much changed the game as she has re-written the rule sheet and presided over it.

Let’s start with music: 100 million records sold. 25 number one hit singles. 44 Top 10 albums. 11 Grammy wins (and 50 nominations). Dolly’s music has been a centerpiece of country music for years, and she’s made forays into rock and pop too, collaborating with names like Don Henley, Kenny Rogers, Rod Stewart, Sia, and Miley Cyrus. She’s behind hit songs like “Jolene,” “9 to 5,” and “I Will Always Love You”. You’d be hard-pressed to find somebody who doesn’t know at least part of each of them.

Hailing from an era that was notably unfriendly to female artists, Dolly is more than just a musical icon: she’s also a world-renowned boss in every sense of the word. She commands respect across genres and generations as a musician, record label owner, philanthropist, and all-around queen of the scene.

Affectionately known to both fans and colleagues as “The Boss,” Bruce is behind timeless hits like “Born in the USA,” “Dancing in the Dark,” “Born to Run,” “Glory Days,” and so many others. It’s not just about the accessible, memorable melodies and hooks (though there are plenty). Bruce’s lyrics perfectly and unapologetically encapsulate the life experiences of blue-collar workers across America. Sometimes happy, sometimes sad, always brutally honest, these are songs that force you to decide whether you’re going to get up and dance or sit down for a long, hard reckoning of your life, and either way, The Boss and his famous E-Street Band have your back.

The man, the myth, the Lennon: John was all of them, and then some. Propelled to stardom as a Beatle along with Sir Paul, Lennon was a force of nature in his own right. His musical proclivities took him to nearly every corner of the world, and the international influences on his songwriting over time became more and more prevalent, both in the Beatles and in his career beyond.

After the Beatles, John (unlike Paul) had only a passing interest in the commercial viability of his music, focusing instead on expressions of peace, love, and unity with songs like “Imagine” and “Working Class Hero.” While he wasn’t the first ultra-famous songwriter to take a left turn and worry less about profit, he was arguably the most famous to do so. Tragically, Lennon was assassinated in December of 1980, cutting short both a life and a career and leaving us all to wonder what might have come next.

Adam Azra’el is a performer, recording artist, engineer, composer, and multi-instrumentalist based in the Twin Cities. He is also the General Manager at School of Rock St. Paul and has over 15 years of teaching experience in both individual and group settings (including seven years with School of Rock). Adam holds degrees in Performance, Music Production and Recording Technology from McNally Smith College of Music.