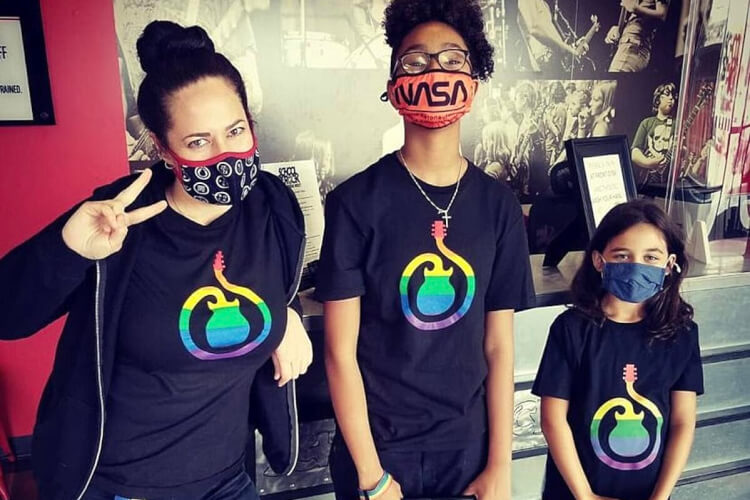 How the LGBTQ+ Community Has Impacted the Music Industry

A history of LGBTQ+ people in music

Bisexual musician John Lennon famously said that rock and roll could just as easily be called “Chuck Berry.” But who influenced Berry? The father of rock and roll would later reflect on his own musical career as “one long Rosetta Tharpe impersonation.” In 1919, before Berry was born and long before anyone would call her the godmother of the blues, four year old “Sister” Rosetta Tharpe started learning to play guitar. Her parents were musical and religious, lending Tharpe an inclination toward gospel music that she brought with her when the family moved to Chicago.

Chicago in the 1920s was a wellspring of blues, jazz, and queerness, home to famous gender-bending performers like Ma Rainey, best known as the mother of the blues. Brash and flamboyant, Rainey routinely performed in a gold gown and diamond tiara, brandishing an ostrich feather in one hand and a pistol in the other. Rainey was openly bisexual, and people speculated that she may have even courted the empress of the blues, Bessie Smith. After Chicago police arrested Rainey in 1928 for running an “indecent party” of bisexual and lesbian guests, Rainey recorded the brazenly queer “Prove It On Me Blues”:

They say I do it, ain't nobody caught me

Sure got to prove it on me;

Went out last night with a crowd of my friends,

They must've been women, 'cause I don't like no men.

From Chicago, Sister Rosetta and her mother began touring the South and, at age 23, Tharpe recorded her first hit album and became an overnight sensation. Not content to just sing, Tharpe was one of the first musicians to bring an experimental new instrument into her act: Fender’s and Gibson’s electric guitars. The fusion of distortion-driven Chicago blues and powerful gospel singing made Sister Rosetta a sensation for decades, including a particularly fruitful decade with her artistic collaborator and romantic partner, R&B singer Marie Knight.

In 1947, Tharpe overheard a 14-year-old boy singing her songs and invited him to open for her show that same evening. Just like that, Little Richard’s career was born. Like Tharpe, “Little” Richard Penneman drew on both his queerness and his devout religious beliefs to create a wholly authentic style of blues music. Penneman’s showmanship and flamboyance came from his youth in underground drag circuits, where he had performed under the name Princess LaVonne. Later, as a musician, he would introduce himself to audiences as “the king of the blues… And the queen, too!”

As rock and roll rose to the forefront of Western culture in the 1950’s, white America elevated stars like Chuck Berry and Elvis Presley while leaving their predecessors by the wayside. Nevertheless, the influence of blues’s mother, godmother and empress (Rainey, Tharpe and Smith) is undeniable. Throughout the 1970’s, Presley would open his live shows with Rainey’s electrifying “See See Rider.” And in 1956, a pre-fame Jerry Lee Lewis auditioned for Sun Records by performing Tharpe’s gospel-blues smash hit “Strange Things Happening Every Day.” Thanks to her fiery blues guitar skills, Tharpe’s interpretation of the traditional Black spiritual had become the first gospel song to make it onto Billboard’s Harlem Hit Parade. (Billboard still maintains this chart today under the name “Hot R&B/Hip-Hop Songs."”. Openly queer artists of color continue to break ground on this chart: In 2019, gay hip hop artist Lil Nas X spent an unprecedented 19 weeks at the number one spot.)

Got to be real: The rise of disco and glam rock

In February 1971, with a dash of glitter under his eyes and dressed in a silver blouse, bisexual T. Rex frontman Marc Bolan kicked off the glam rock movement with T-Rex’s appearance on Top of the Pops. Glam rock’s androgyny and campy undertones allowed the LGBT community to express themselves unabashedly, and the genre quickly became a haven for LGBT artists from Queen to Lou Reed to Blondie to Judas Priest. Female glam rockers like Joan Jett, Suzi Quatro, and Siouxsie and the Banshees found liberation donning leather, dark colors, and an aggressive stage presence. Male glam rockers like Elton John, the New York Dolls, and the B-52s subverted gender norms by wearing flamboyant outfits, make-up, and even oversize wigs. Lou Reed’s 1972 hit “Walk on the Wild Side” served as a hymn to glam rock’s gender fluidity, romanticizing the plight of real life transgender actresses like Holly Woodlawn:

Hitchhiked her way across the U.S.A.

Plucked her eyebrows on the way,

Shaved her legs and then he was a she.

Take a walk on the wild side.”

While glam rock spread across England, the USA’s bass-heavy motown grooves evolved into discotheques and the thumping beats that filled their dance floors. In discoteques and dance clubs across the country, queer dancers expressed themselves to unrepentant anthems by artists like Boy George, Sylvester, and Culture Club (headed by the deliciously androgynous Boy George). In New York City, underground dance parties and balls hosted by queer people of color gave birth to voguing, a combination of dance, posing, and drag. Dance clubs and ball culture offered queer people a safe space for identity exploration, a sentiment often reflected in the songs’ lyrics. Cheryl Lynn’s “Got To Be Real” describes always knowing she was a lesbian as she repeats the title imperative for herself and the dance floor, while Pet Shop Boys’ “It’s A Sin” pushes back against society’s ingrained homophobia:

Whatever you taught me,

I didn’t believe it.

Father you fought me

‘cause I didn’t care

and I still don’t understand.

In the 1980s and ‘90s, glam rock, disco and dance music gave way to more insistent pushback in the queer community with heavier genres like queercore, riot grrrl and industrial music. Nonbinary visionary Genesis P-Orridge and their group Throbbing Gristle pioneered the dismorphic sounds of industrial music, while queercore bands like Pansy Division and Tribe 8 decried discrimination. Female-driven riot grrrl bands like Bikini Kill and L7 announced the rise of third wave feminism and queer liberation with Bikini Kill’s description of the “rebel girls” fueling both movements: “When she walks, the revolution's coming / In her kiss, I taste the revolution. / Rebel girl, you are the queen of my world.”

“This will open doors”: Contemporary queerness in hip hop and rock

With the start of the 21st century, LGBT music entered a new era. The outrage of riot grrrl and queercore gave way to confident public queerness, with mainstream LGBT artists like Lady Gaga and Lil Nas X filling the radio airwaves with pride anthems. Artists from Tegan And Sara to Janelle Monae to Panic! At The Disco regularly discuss sexuality and desire in their music. Wearing their trademark tuxedo, Janelle Monae promises on the hit single “Q.U.E.E.N.” that “even if it makes others uncomfortable, / I will love who I am.” Monae and other nonbinary musicians like Demi Lovato, Mykki Blanco and My Chemical Romance singer Gerard Way have helped bring less well-known queer identities into the limelight, important progress that Way traces back to glam rock’s freedom to subvert gender through musical performance.

In 2014, Against Me! released the landmark queer concept album Transgender Dysphoria Blues, with lead singer Laura Jane Grace exploring her feelings about coming out and transitioning in the public eye. The title track describes the dissonance of public perception: “You want them to notice / the ragged ends of your summer dress. / You want them to see you / like they see every other girl.” Other trans artists like SOPHIE and 100 gecs explore themes of identity and dysmorphia through industrial hyperpop, carrying on Throbbing Gristle’s legacy as they shift the pitch of their voices higher and juxtapose sugary melodies against distorted digital files.

The 21st century also gave rise to a subgenre of hip hop sometimes known as “homo hop.” Since its creation in the socially conservative 1980s, hip-hop has been about defying systems of oppression, and artists like Frank Ocean, WILLOW and Lil Nas X carry on this legacy by championing identity and liberation in their music. Last March, Lil Nas X tweeted about the strength and vulnerability required to make confidently queer music, saying to his younger self, “i know we promised to never come out publicly, i know we promised to never be ‘that’ type of gay person, i know we promised to die with the secret, but this will open doors for many other queer people to simply exist.”