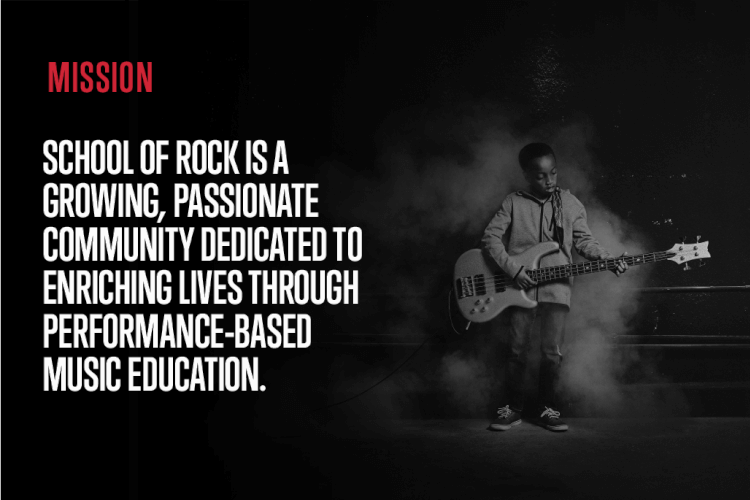 Meet the School of Rock Eden Prairie team! Lots of new faces around the School of Rock so we wanted to introduce you to everyone. This team and all the talented instructors are so thankful for all of you! Thanks for your patience as we strive to make the school even better.

Molly has been teaching private music lessons since 2005 and joined the School of Rock in 2022. She has a Masters of Arts in Teaching, and has taught at public schools, a private school, and a charter as a classroom teacher for the last six years. SInce 2015, Molly also has directed seven different musicals. For over 12 years, Molly has been part of a music comedy band called The Dregs. She has performed all around the Twin Cities, including the Minnesota Opera Chorus, the Jungle Theater, Fringe Festival, and the Bloomington Civic Theater pit orchestra.

As a former School of Rock alumni, hailing from Kansas City, MO, Ethan brings his experience and creativity in crafting the ultimate rock n’ roll experience for students of Eden Prairie School of Rock. From the creation of a perfect program to the perfect pairing of teacher-to-student, Ethan brings a musical perspective to the table to make sure every student is able to rock out on both the stage and in real life. Ethan’s first concert was Styx at the Ameristar Casino and Resort in 2010. Ethan’s favorite band is Pink Floyd. Ethan also has a Bachelors in Music Business.

Andrew joined the School of Rock in 2019. He studied Music Theory & Composition at Saint John’s University with a focus in vocal performance and a minor in K-12 Music Education. In addition to participating in choirs and opera workshops, he also performed as a trombonist and guitarist in a variety of ensembles, including jazz band/combos, Amadeus chamber symphony orchestra and guitar ensemble. Rock music has always been a part of Andrew’s life from listening to playing and recording. He was in the high school metal band Brionecrosis, the college rock band Jetset and several bands including Tabah, Japan Van Damme, Dylan McFarling and Le Serpent.

Jenny Estes has been at the School of Rock Eden Prairie for two and a half years. She is the friendly face you see at the front desk on Wednesdays and Thursdays. Her first concert was Hilary Duff and her favorite band is the Jonas Brothers. She also plays drums in the adult band, Grad School. She went to school for music business.

We welcome back Chris to the School of Rock Eden Prairie! Chris was the studio coordinator (and more!) from 2013-2015. She has a background in scheduling, customer service and office management. Her first concert was Ted Nugent, and she was lucky enough to see Prince and Queen.

Steve Davis and Becky Smith became the owners of the School of Rock in Eden Prairie in Dec. 2021. They live in Minneapolis with their dog Marigold. Steve is the vice president of engineering for commerce at Sitecore. Becky works in content development at Allianz. They’re busy getting the School of Rock ready for a reopening in April. Avid music fans and concert goers, Becky’s favorite artist/band is Brandi Carlile and Steve is a fan of Tool and Meshuggah. Both are excited to be part of the School of Rock family and take Eden Prairie to the next level!