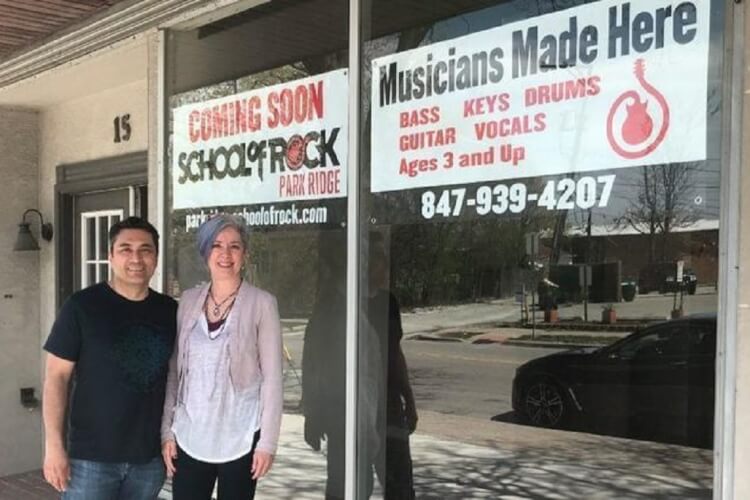 When Jaime and Susan Dominguez first enrolled their son in drum lessons, the instruction and repetitious practice assignments left him bored, they say.

But, after sending him to a School of Rock in their hometown of Elmhurst, his outlook quickly changed.

“After the first month he was coming home and playing some notes and music,” Jaime Dominguez said.

As they watched their son develop as a musician and a younger son embrace singing and performing on stage, the couple made the decision to open their own School of Rock franchise.

Signs announcing the future school hang in the windows of 15 N. Prospect Ave. in Uptown Park Ridge, a former chiropractic office. The Dominguezes are tentatively planning to open in late June, with a “grand opening” in August.

“We have a number of friends in the community, so when we learned Park Ridge was an opportunity for us, we were so excited,” Susan Dominguez said. “Just the chance to offer to the community what we’ve seen our kids benefit from is huge.”

With a focus on rock music and giving students the chance to perform on stage before live audiences, School of Rock offers lessons in guitar, bass guitar, drums, keyboards or vocals. Classes range from “Little Wing” for 3- to 6-year-olds, to the House Band program, where teens experience what its like to play in a band at local music venues.

School of Rock Oak Park, for example, has several upcoming performances at the Wire in Berwyn, including the 21st Century Pop Show #2 and a concert of Queen covers on April 27, and the Iron Maiden Vs. Judas Priest Show on April 28.

There is also the Center Stage Artist Search Program, giving budding musicians ages 13 to 19 a chance to audition for a major recording label, according to the school’s website. Allstars, a group for ages 17 and under, sends a select number of School of Rock musicians on a summer nationwide tour.

While many schools offer programs for adults as well, School of Rock Park Ridge plans to initially focus on lessons for kids ages 3 to 17 only, Jaime Dominguez said. He hopes to enroll between 130 and 150 students and hire teachers who are experienced musicians, he said.

“Most of the time [the instructors] are people who are actually in a band and they are out touring and playing,” Dominguez said.

In the future, programs aimed at songwriting could be offered, the couple said.

“That’s definitely something the schools are looking into doing,” Jaime Dominguez said. “Some have already started that, but on a part-time basis.”

School of Rock franchises are located around the world, and include 15 in the Chicago area, according to the company’s website.