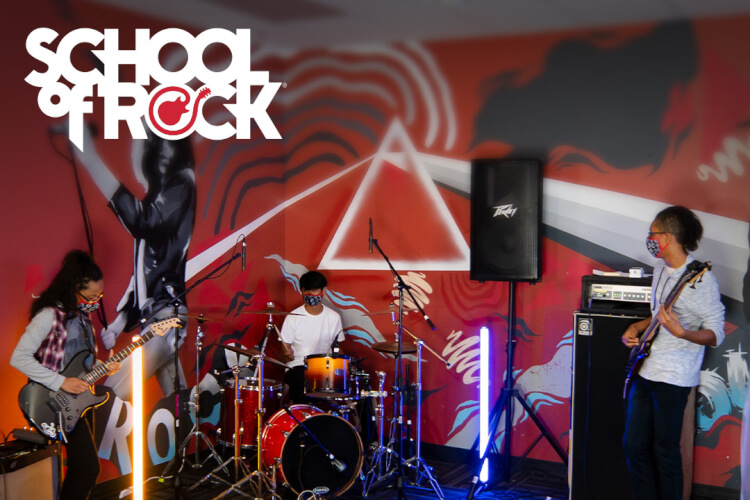 We are excited to announce Fall of 2020 Show Themes!

School of Rock - Elmhurst is open for a combination of in-person and remote programming. If you missed our previous email about our updated safety protocols, you can click HERE to read everything School of Rock is doing to make the health of students, staff, and families our top priority.

We are NOW ENROLLING for our fall season shows!  Each show is dedicated to an iconic music scene, including the sounds of San Francisco's Haight Ashbury, Nashville's Grand Ole Opry, Detroit's Motown, and London's Swinging England Radio!

In addition to our Performance Program, we will continue to offer our Songwriting program!  Students get hands on experience with all the various aspects of songwriting:  lyrics, melody, chord progressions, rhythmic concepts, and so much more!  And this fall season we're offering an exclusive VIRTUAL ONLY songwriting session over zoom! 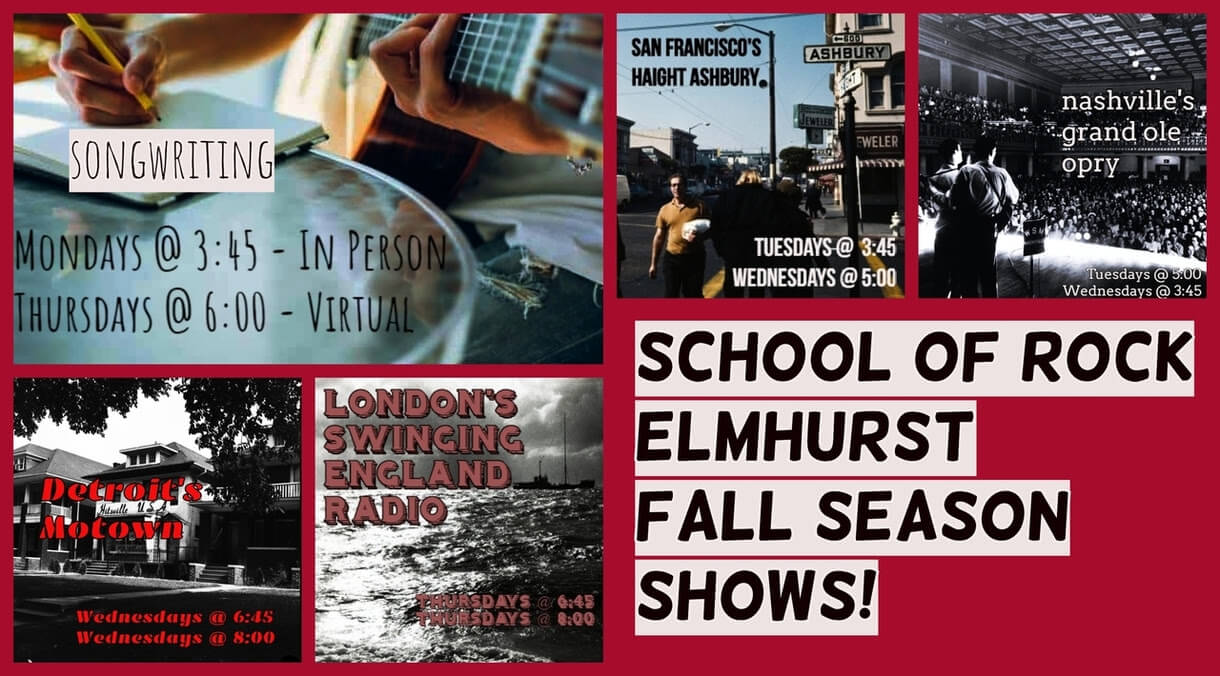 CLICK HERE TO GET SIGNED UP FOR THE FALL SEASON

DRESS REHEARSAL WILL BE

FALL SEASON SHOW WILL BE 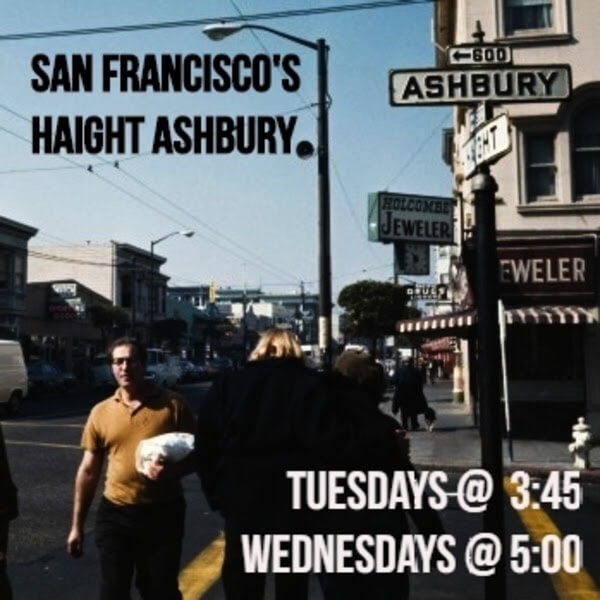 In the 1960's and 70's San Francisco's Haight Ashbury was a neighborhood at the corner of a cultural revolution - love was free, minds were open, and the music was GREAT!  Featuring songs from such amazing and eclectic musicians as The Grateful Dead, Santana, Janis Joplin, Steve Miller Band, and so many others, the Haight Ashbury Show is gonna be a groovy time for all ages.  So don't freak out man, just boogie on down to the barrio to get rocking! 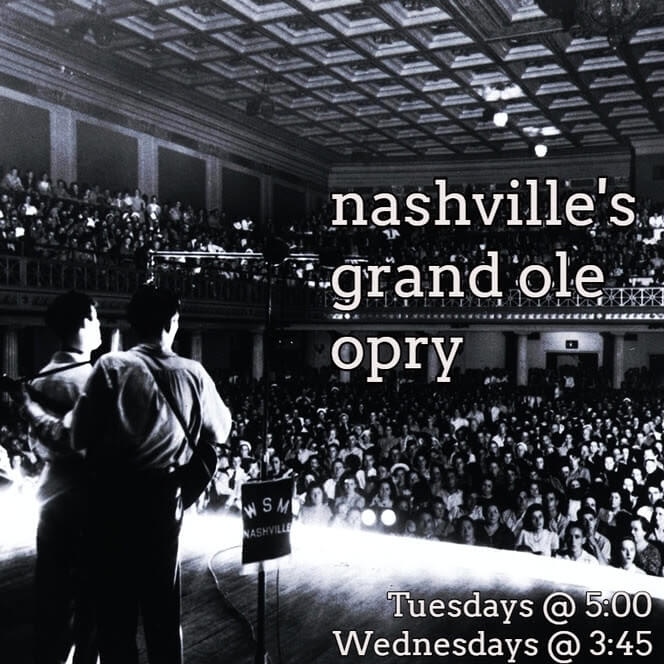 Nashville, Tennessee - music city, USA!  And there are few better outlets for that beautiful and uniquely American form of popular music called Country than the famous radio show broadcast every week from Nashville's Ryman Auditorium:  The Grand Ole Opry!  Featuring such classic artists as Tammy Wynette, Patsy Cline, Johnny Cash, The Everly Brother, and more - plus some newer artists like Carrie Underwood and Jeff Tweedy, this is gonna be a swinging good time! 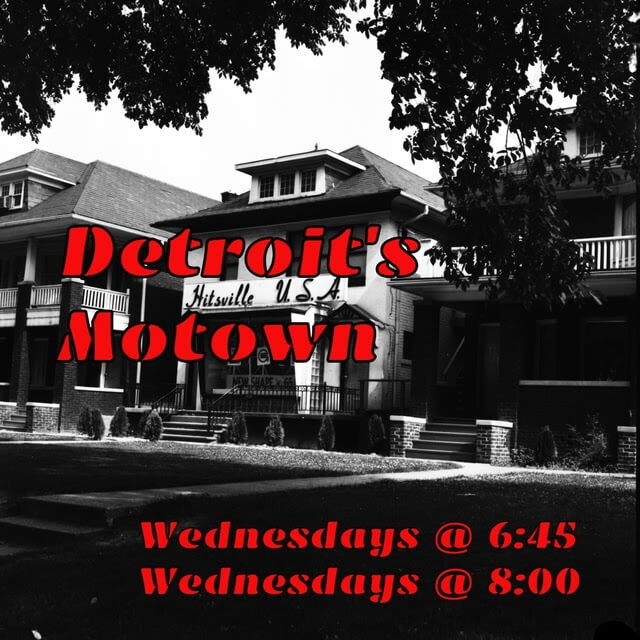 Detroit is a working class town, full of working class people.  But it's also the home of Motown Records, one of the most influential forces in popular music in the past 100 years - not only in America, but worldwide!  The sweet harmonies, funky basslines, and so much more found in the work of Stevie Wonder, Marvin Gaye, The Temptation, Martha Reeves, Gladys Knight, and so many others will make this sure to be a popular and great show for all! 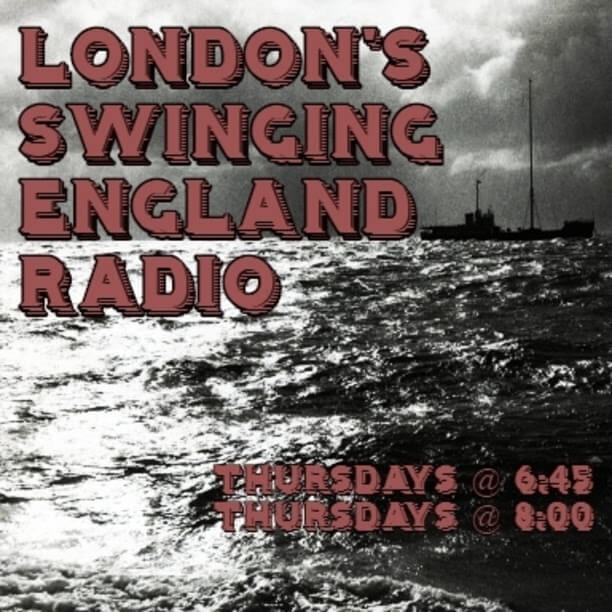 There's pirate radio and then there's PIRATE radio.  Swinging England was one of the most popular radio stations amongst London's youth in the 1960's!  But it wasn't broadcasting from a little studio near Big Ben - Swinging England Radio was based in a literal pirate ship off the coast!  Featuring such classic british invasion bands as The Beatles, The Rolling Stones, The Who, The Hollies, and more this show is gonna be a great exercise across all instruments!

CLICK HERE TO GET SIGNED UP FOR THE FALL SEASON