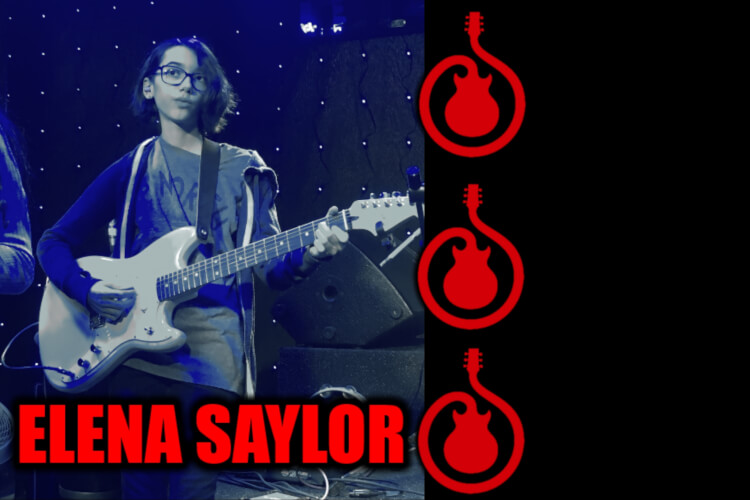 Elena Saylor Rocks as School of Rock Farmington's Student of the Month!

January 16, 2019STUDENTS-ALUMNI-TEACHERSElena Saylor Rocks as School of Rock Farmington's Student of the Month!

Every month, School of Rock Farmington takes a moment to recognize those students who have made extraordinary progress here. Elena Saylor, 13, is one of those students. Katelynn Corll, one of our Show Directors and Instructors, sat down with Elena for a quick chat.

Katelynn: How long have you been playing guitar?

Elena: "Since July, so only about a half a year."

K: You've come so far, it's amazing that it has only been six months! What made you want to learn how to play?

E: "I’ve always wanted to play guitar, but I never really had the chance to learn with a teacher until now."

K: Who are some big influences in your life?

K: That's awesome! What is something on your bucket list to learn about?

E: "There’s a style of painting that I really want to learn, called acrylic pouring. I’ve tried doing it before, but I want to learn the right way of doing it."

K: Very nice. What is your favorite movie?

E: "I have a lot of favorite movies, but my favorite movie is probably Spiderman: Into the Spider-Verse right now. There’s so many good movies out right now, it’s hard to choose!"

K: I know exactly what you mean, so many movies to see! What’s your favorite TV Show?

K: If you could have any superpower, what would it be?

K: If you were to learn a different instrument, what would you want to learn?

E: "Probably saxophone, because it seems like a really cool instrument and I have a friend who plays saxophone."

K: A fantastic choice, for sure! Thanks so much for talking with me!

We are so excited to seeing Elena's continued musical growth here! School of Rock Farmington is a music school that focuses on group-based musical education. We combine private one-on-one instruction with group learning, where the kids are the band! If you think your child is the next Elena, contact us today to get started with a free lesson! Until next time!