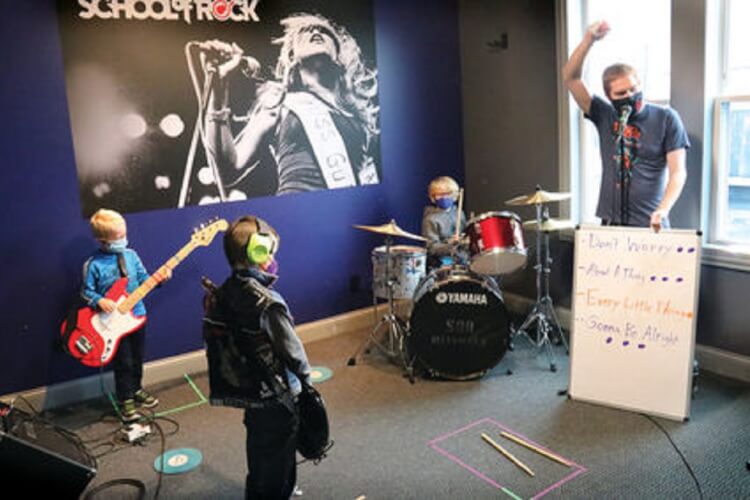 September 10, 2020IN THE PRESSRead the Full Story Here 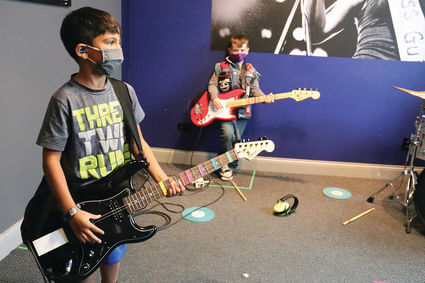 At Hinsdale's School of Rock, over the last six months, the beat has gone on(line).

Danielle Fitzsimmons, general manager of the music school at 116 S. Washington St., said the school was able to quickly pivot March 20 when they had to close under a statewide COVID-19 shelter-in-place order.

"Everything happened really quickly. I felt like one day I was going over safety protocols and then the next day the entire country shut down," she said of the Saturday closing. "School of Rock (corporate) had tools for us to use immediately. There was really no down time. By that Monday, we were able to offer remote lessons."

For students and staff that didn't have the necessary equipment, the school found a solution.

"We were able to loan out equipment to our staff and provide guitars and drums to those who were need of that for at-home practice," she said.

The school's annual live spring show was transformed into a blend of recorded parts by students.

I'm just very grateful for the flexibility of our staff and our School of Rock community," Fitzsimmons said. "Everyone was wonderful."

"One of the major changes that we've made here is preparing our school so that everything can be done at a distance, including special face shields for our vocalists," Fitzsimmons said. "All students and staff wear masks."

Marissa Cuttica, whose 13- and 7-year-old daughters study at School of Rock, was impressed was the school's agility.

"(My 13-year-old) did online learning from the week it was shut down. They even did her performance group classes," Cuttica said of her daughter Ella, a guitarist and vocalist.

One of the benefits of the online experience, Cuttica noted, is parents' greater ability to eavesdrop.

"It's nice to hear what they're working on," she remarked.

Cuttica is confident in the school's safety measures.

"They're with the same kids on a regular basis, and they rotate into different rooms and keep them spaced out. She keeps her mask on the whole time," she said.

"I think doing a competition online is probably the way to go," Badea opined of the annual event that attracts nationwide entrants.

Submissions numbered 56 compared to 35-40 in a normal year.

"It's so much easier access for people and their not needing to travel," he said.

Of course, the circumstances have had plenty of downsides, like the cancellation of AMI's summer camp and postponement of the American Youth Symphony Orchestra's inaugural year.

"We had to delay that until the fall of 2021," Badea lamented. "It's a matter of keeping everybody safe."

Group lessons were canceled, but private instruction was able to transition to a remote format in the spring with little disruption.

"We've always been pretty tech-savvy, so it wasn't that dramatic of a transition for us to go online," Badea said.

Some students have left because the online format did not meet their comfort level.

"We totally get it. There's a level of attrition that's going to happen," he acknowledged.

While a few in-person lessons are taking place at each of the school's three campuses, the vast majority - 85 to 90 percent - is online, he said.

"That really helped out because there's going to be loss of revenue with so many programs canceled. And there's still overhead," he said.

School of Rock's Fitzsimmons said one of her biggest adjustments is grappling with how much students grew between March and August.

"I feel like everyone is a foot taller!" she exclaimed. "It was hard not to see everyone each week."

She is looking forward to the school's first live performance show next month at The Jam Lab in Brookfield. She also sees lasting merit in online learning.

"I think that just the option of having a virtual lesson is really great new addition to our program," Fitzsimmons said, using the example of a youth whose family moved to Georgia but was still able to study remotely with his teacher here.

Badea agrees, excited about the prospect of international contestants in next year's violin competition. He said families have expressed gratitude for the lessons during an otherwise uncertain season.

"Given all that they've had to do without, having an activity thats' still available to them, and interaction with teachers, they've cherished that, which is fantastic," he said. 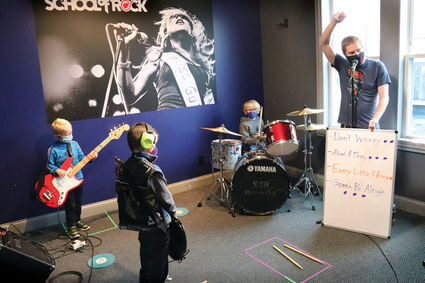 School of Rock instructor Dan Beasley directs Austen Steele (from left), Emmet Staples and Thomas Geffords in playing Bob Marley's "Don't Worry About a Thing." School of Rock, along with other local music schools, were forced to move online when businesse