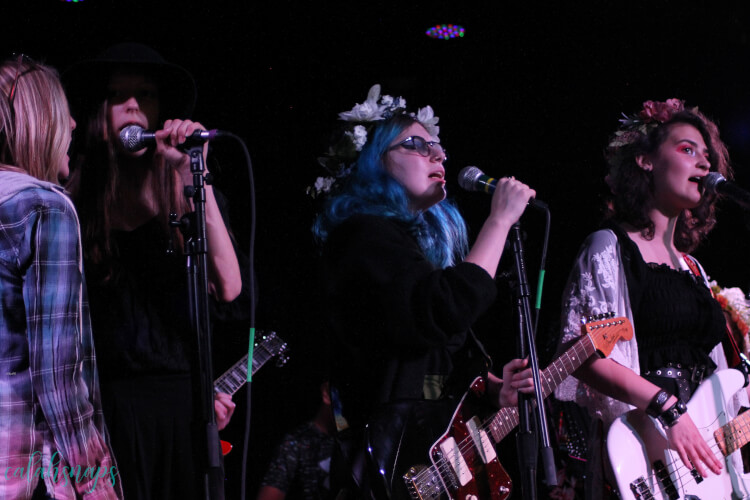 ‘It’s one of my favorite places to be’: School of Rock Issaquah gears up for January shows

In January, students will be paying homage to the Beatles, Black Sabbath, Chris Cornell and others.

What do Black Sabbath, Iron Maiden, Judas Priest, Chris Cornell and the Beatles have in common? Aside from the fact that they’re all in the pantheon of great rock acts, their music will be given new life through a series of January performances by students of the School of Rock Issaquah.

Established in 2002 by the musician Paul Green, the School of Rock is a for-profit music education program with 140 locations across eight countries.

(Though the name of the company is shared with the 2003 Jack Black film, there is no purposeful connection between the two, despite some noticeable similarities; the writer of the movie, Mike White, has said that he hadn’t heard of Green or his enterprise while working on the script.)

Issaquah got its own location five or so years ago. Like its sister sites, it provides a mixture of lessons, camps, workshops and more. Preparation culminates in live performances during which students pay homage to the artists who inspire them.

The School of Rock Issaquah’s co-owner, Chad Fondren, says the bar is set high for the instructors who help craft the shows. While being proficient with their instrument of choice is a given, it’s also pivotal to get people who have experience with music industry standards like touring.

“We want them to walk the walk, and we want them to be able to speak from experience about being onstage,” he said, though he added that it can be hard to find people who meet all the sought-after criteria.

The burst of January shows, according to Fondren, works per the program’s seasonal schedule. Typically, Fondren said, seasons run three months in the summer, four in the fall and five in the spring. The January performances are coming at the tail end of the fall period; the Beatles production, for example, has been in the works since September. Usually, weekly rehearsals are about three hours long, and work in conjunction with what students are individually working on in the school.

The program’s live performances have a science to them, according to Fondren. While crafting a set list that covers as much of a given artist’s discography as possible is vital. What also has to be factored in is the ratio of performers (i.e., how many guitarists and vocalists a specific performance will feature), experience, gender and more. Student requests, which are collected on a sign-up form, must also be taken into consideration.

Fondren said that after a set is mostly figured out, instructors will do a preview show for the students as rehearsals start as a way to build up hype. But as noted by Cole Paramore, the director of the Beatles show and one of the school’s long-term instructors (he was hired before the school even narrowed down its permanent location), student passion can in some ways be a double-edged sword. Everyone involved with a show tends to have differing opinions on the set list, and which songs are worthier of being spotlit than others.

“I probably have 10 new requests every single rehearsal,” Paramore said with a laugh.

But student zeal is also what makes the performances successful.

“We want to respect the music as much as possible but bring it to life as authentically as we can… that’s easier than it sounds when you have a cast that loves the Beatles and respects them and nerds out as much as I do,” Paramore said.

Staying varied is a key to the School of Rock’s mission. For Issaquah’s next group of performances, there’s going to be an emphasis on prog rockers like Pink Floyd, King Crimson and Yes as well as on Motown, further manifesting the school’s longstanding commitment to having no one certain type of style or technique outweigh others. Live performances are an avenue to show off progress.

For many budding musicians, the School of Rock can provide a new community. For Eastlake High School student Sadie Rabinowitz (15), who moved to Issaquah about five years ago, the sensation that she was in the right place came almost as soon as she first walked through the school’s front doors.

Rabinowitz, who is performing in the Beatles show, enrolled in October 2018, after picking up the bass guitar that summer at a camp. Her mom signed her up for the program partly in the interest of meeting like-minded people. That’s what Rabinowitz has found.

“School of Rock is like my family now,” she said. “I have really, really been able to rely on everyone who works there, and all of my friends who go there. It’s just a place where I feel like I can truly be myself. And that might be a little cheesy… but I really feel like I don’t have to hide anything. I don’t feel like that at school. It was really refreshing and nice to be able to get comfortable in a new environment. Now it’s one of my favorite places to be.”

Founding a community on a shared love of music (and playing music) is something that, in Paramore’s eye, is advantageous for students — many of whom have found an outlet, like Rabinowitz, through the program.

“Anyone can see the benefit of having a community or having a group of peers who are interested in the same thing that they are… Often times, these are kids who might feel alienated in other groups or in other social situations,” Paramore said. “But in our location in particular, everyone, from the teachers, all the students, parents — everyone is accepting, and it’s very, very cool and welcoming and nice.”

As the school’s co-owner, Fondren has been able to see the progress students make not just on their respective instruments but in their sense of self.

“Every time I’m just floored by what these kids are able to accomplish in a matter of months,” he said. “It’s pretty amazing… When they first come in and you know you can tell they’re hesitant about like, ‘Oh my god, I barely started this instrument. How am I supposed to play some big rock show in a matter of months? That’s really daunting.’ Seeing them go from that place to a place of total confidence to being on stage and smiling, doing the rock moves, seeing their confidence grow and the friendships they develop in the process is amazing.”