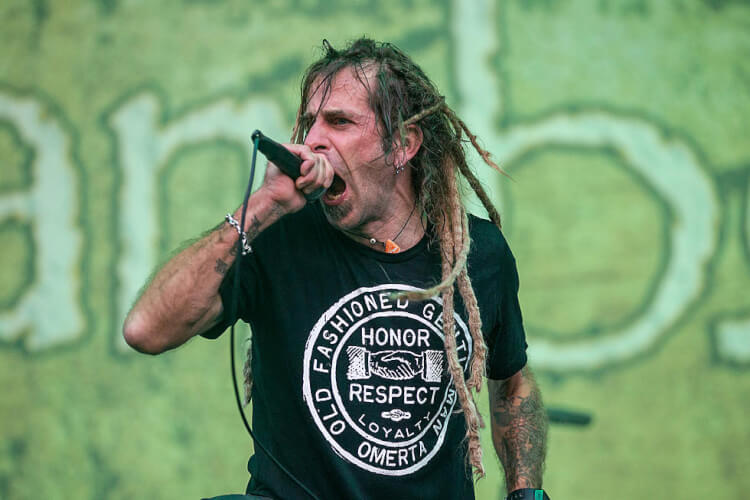 May 10, 2022IN THE PRESSLoudwire: What Lamb of God’s Randy Blythe Was Most Surprised By When Playing With ‘School of Rock’ Kids

The Metal Tour of the Year's second leg has been underway since early April, with Megadeth, Lamb of God, Trivium, and In Flames bringing metal to the masses all across North America. Randy Blythe, naturally, is out with his bandmates, but it wasn't too long ago he played with a bunch of School of Rock Kids, who left him blown away by the experience.

As the latest guest on Full Metal Jackie's weekend radio show, Lamb of God frontman Randy Blythe discussed his collaboration with the School of Rock in Doylestown, Pa. earlier this year where he performed his band's songs with a group of young kids. The singer even shared some details about his upcoming second book.

"I showed up and these kids were so well rehearsed and they were so engaged," said Blythe. "They were not messing around with their phones or TikToking, or trying to prove via social media that they were hanging out with some dude from a metal band. They were there to make music and it was really encouraging to me because the digital world is so distracting."

The Metal Tour of the Year continues through late May, with its final stop being in Quebec City, Quebec May 19.

Read a portion of the interview below.

"These kids were so well rehearsed and so engaged"

Recently, you participated in a School of Rock instructional workshop. What aspects of imparting knowledge were unexpectedly fulfilling?

I went to the School of Rock in Doylestown, Pa. and it was such a pleasant experience. I showed up and we covered three or four Lamb of God songs that they chose. The School of Rock people had me pick four songs that were influential on me, too, so I did a Corrosion of Conformity song, “Hungry Child” off the Animosity album, sort of in honor of my [late] friend Reed Mullin. That is a hugely influential song for me as a singer. I’ve been listening to them since I was a teenager.

I did a Jesus Lizard song, because it’s not as simple as it seems. Then I did a Stooges song, “Down on the Street”, and I did a Bad Brains song.

I showed up and these kids were so well rehearsed and they were so engaged. They were not messing around with their phones or TikToking, or trying to prove via social media that they were hanging out with some dude from a metal band. They were there to make music and it was really encouraging to me because the digital world is so distracting.

That was really the most rewarding thing to me — working with kids who were fully engaged in what we were doing and expressing themselves creatively.

I’m from the era before computers and cell phones were so ubiquitous. To say, “Oh these kids, all they do is play on their cell phones..." to a great degree that is true, but once again I need to question my own assumptions and I need to remind myself that it’s foolish to just make these blanket statements.

It was really refreshing to work with a 14-year-old person who would look you in the eye and not constantly be playing with their cell phone. I didn’t see cell phones — we were there to work and make music together and it was just a really engaging experience. The people there were super cool and the kids were very, very talented. There was one dude who was singing with me and I was a little embarrassed to be singing with him because he’s 15 and he’s just got these pipes. I’m like, “Jesus Christ, I am outta here."

Read the full interview on Loudwire.