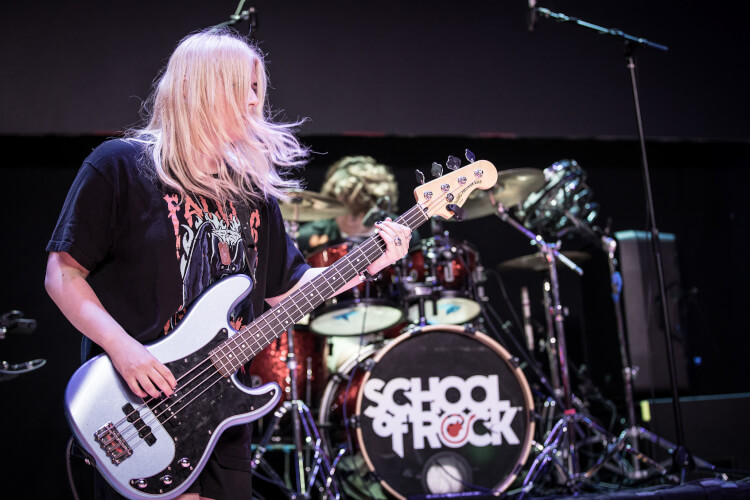 In a song with a walking bass line, it will likely be the most consistent sound of the whole band.

What is a Walking Bass Line?

A walking bass line is a common and simple form of bass playing found across many genres. It features the bass (usually, the upright bass) playing a steady quarter note rhythm while also typically avoiding playing the same note twice. The key to a great line is that it sounds smooth, melodic, and provides a strong harmonic foundation to guide the musicians and listeners alike.

Before we start creating our own walking bass lines, let’s identify a few fundamental building blocks that every great bass line will contain.

The examples below are from the song “Walking Blues” which is found on the School of Rock Method App.

These are great tools to incorporate that help you change from the chord you're on to the one you're going to in a smooth and predictable manner.  These can be chromatic or diatonic and they can be one note or many. These can also be called passing tones (PT) or approach notes (AN).

Measure 2 has the note sequence G, Gb with the purpose to smoothly walk down to the root note of the F7 chord, F.  Gb is a chromatic passing tone.

Measure 4 has a walk up consisting of G, Ab, and A, to land on the root of the Bb7 chord, Bb.  Ab is a chromatic passing tone.

Measures 11 and 12 are the turnaround.  It consists of chromatic and diatonic notes resulting in a walk up leading back to the beginning of the form, and root note, F.  Despite D, D#, and E being lower pitches, the phrase is still a walk up because of the ascending note order.

Measures 7 and 8 contain a diatonic walk down from D to F.

The key to a bass line with a strong harmonic foundation is to play the triad of the chord you’re on. If the chord is a C Major, playing the notes, C, E, then G, is a great way to establish a foundation for the soloist. From there, we can embellish the line in several ways, such as a passing tone. It should be noted that the strongest note to play is the root of the chord, but starting with the third, fifth, or seventh is valid and provides flair!

Measures 9 and 10 have the pattern of root, fifth, third, and root for their respective chords: C7 and Bb7.

Last but not least, phrasing will make your bass line come to life. Think of each measure of music as a word or sentence in a spoken language. Phrasing is the concept of combining sentences and ideas to create a cohesive and interesting story. Musically, we can play a two bar phrase, which is a motif, usually repeated, that lasts 8 beats or two measures. Doing this establishes something to build upon later. Looking at the bigger picture, we can use phrasing to create peaks and valleys within the bass line. This will create interest in your line.

Measures 5 and 6 contain a two bar phrase that ascend and descend using the same notes.  This specific example is a classic blues walking bass motif.

How to Play a Walking Bass Line

Now that we have some tools, let’s apply them one measure at a time on a jazz blues chord progression. This is a 12 bar blues in the key of F. When creating a line, think of it as a puzzle where each note has a purpose and function.

Measure 1 is on the F7 chord. Let’s start with the root note, F, and play the triad in order: F, A, C. The last note in measure 1 should lead us to measure 2, which will start on the root, Bb.  Let’s walk down chromatically from C to Bb using the note Cb (B natural). Cb is a passing tone.  Note that our Measure 1 is identical to Measure 1 in the example “Walking Blues”—do not stress about playing something unique, rather play solid and mindfully.

Measure 2 is on the Bb7 chord, and our line starts with the root note, Bb. Since we have a descending phrase from the last two notes of Measure 1, let’s keep descending, this time diatonically: Bb, A, G. For our last note of Measure 2, we need a strong note to lead to the next chord, F7. We will start Measure 3 with the root note, F. A strong note is C because it is the fifth of F. The fifth always wants to resolve to the root, which will be the first note of Measure 3.

Measure 3 starts with the root F, and we’re on the F7 chord for two measures. This is a perfect time to set up a two bar phrase. This is a classic blues walking bass motif. Play the triad: F, A, C, then the sixth of the chord, D. Measure 4 starts with the flat seventh, Eb. That note concludes the idea from the previous measure and it leans into the dominant sound of the F7 chord.

Measure 4 will descend following the same notes from the previous measure: Eb, D, C, A. The last note, A, sets up the next chord nicely because it is only a half step away and it is a chord tone of the current chord!

Measure 5 is the Bb7 chord. We will create a descending phrase. Begin with the root, followed by a chord tone, then descend with E and Eb. E and Eb are passing tones that smoothly lead to the note, D, which is the third of the Bb7 chord. Remember, you don’t always have to start with the root—the third, fifth or seventh are options.

Measure 6 continues to descend diatonically ending on A: D, C, Bb, A. A is the third of our next chord, F7, which will smoothly guide us to F7 and the root, F.

Measures 7 and 8 are both F7, and like before, are a great opportunity for a two bar phrase. Repeat the same idea from Measures 3 and 4. This will solidify the motif from earlier.

The last four measures of the piece have a lot of chord movement—this suggests we should play extra solid to keep a strong harmonic foundation through the changes.

Measure 9 is the chord, C7. Like before, start on the root C, and play the rest of the triad: E and G. Looking ahead to the next measure, the chord is Bb7. Pick a note that leads smoothly from G to Bb. This example uses A since that will continue the walk up to Bb.

Measure 10 is the chord, Bb7. Start on the root, and since we’re ascending from the previous measure, let’s continue that phrasing idea to go to the next chord, F7: Bb, C, D, E. While E is not technically in the scale of Bb7, it has a strong pull to F which is the root of the next chord. E is an approach note.

Measures 11 and 12 are what is known as the turnaround. The turnaround is a common way to end most blues and jazz songs that indicate that the chord progression, or form, is about to repeat again. “Walking Blues” uses the most simple turnaround variation: a Five One progression: C7, F7. Slightly more advanced, but equally as common, is the One Six Two Five: F7, D minor, G7, C7. For the One Six Two Five, since the chords change quickly, prioritize playing the root followed by a strong note leading to the next chord. A tried and true method is to approach the root notes of each chord by half-step.

The pattern continues in Measure 12. Start on the root G, then Db. Db is a half step above C.  Finally, on the C7 chord, play the root C followed by a note a half step away from F, which is E.  These approach notes can be a half step above or below the target note. Mix and match to experiment what sounds best to you. For the turnaround, a strong practice is to memorize a “good line” like the one provided or one from a notable musician. Since the chords move quickly, it’s best to play something 100% solid, and leave the improvisation for the rest of the tune.

That’s the end of the lesson—you have successfully played a walking bass line over a 12 bar blues in F! Practice and loop this bass line over and over to fully internalize all these concepts. Feel free to compare this line to “Walking Blues” and play them one after another to hear the differences. Lastly, it is important to listen to great players to fully immerse yourself in the style. Ray Brown, Ron Carter, Paul Chambers, and John Patitucci are all masters of the walking bass line and are sure to delight and inspire musicians of all levels.

You can read additional bass guitar resources on our website or consider scheduling a free trial below at a School of Rock near you!

Approach Notes: a note, or group of notes, that lead to a desired target note.  Can be diatonic or chromatic.  See Passing Tone.

Chromatic: A note not within the established scale.

Diatonic: A note within the established scale.

Harmonic Foundation: A group of notes or phrases that establish a chord, without explicitly playing the chord.

Passing Tone: Usually one note that is between two target, foundational notes.  A Passing Tone is an embellishment that creates smooth movement between notes.  See Approach Notes.

Root: The most fundamental note in a given chord.  For example, the root of C Major is C and the root of F minor is F.

Triad: The first, third, and fifth note in a given scale.

Turnaround: The ending of a musical form indicating that the music will repeat.

Walk Up/Walk Down: A Walk Up is an ascending collection of pitches that smoothly guide to a desired note.  A Walk Down is the same, but descending.

Trevor Mooney attended Berklee College of Music and is a bass guitar teacher at School of Rock Highwood in Highwood, IL. Aside from his passion for electric bass and love of teaching and music, he can be found outside enjoying the sunshine or playing Dungeons & Dragons with his friends.