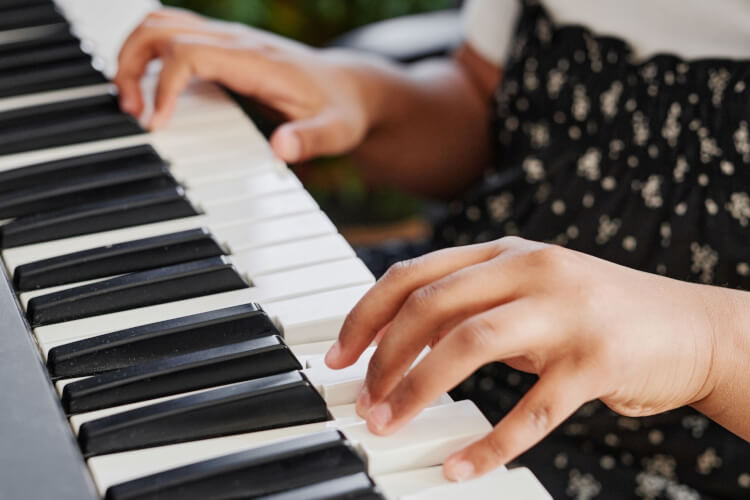 Much like learning any other instrument, learning songs on piano as a beginner can seem like a daunting task. Learning new songs provides many different opportunities to take techniques that can be practiced in isolation such as scales, triads, arpeggios and put them all in the real world. As the instrument that Western music theory is based on and written around, piano has the advantage of being a very powerful and flexible instrument for learning and playing songs on, even in the guitar-driven rock world.

Be cautious of some songs or riffs that are more specifically guitar-oriented. There are some that are organized in shapes that may be easy to play on guitar but don’t transfer well to the keyboard. An example of this is in strumming patterns often used in acoustic guitar parts; imitating the “strum” motion is not the most natural way to play the piano. These can be adapted to playing held “block chords” on the piano or some forms of arpeggios or modified rhythms. However, the reverse can be true of songs that have been written and performed on piano and don’t move well onto a single guitar! Thankfully there are lots of songs out there for both instruments and can be interchanged or played by these two instruments working together.

What makes a good song to start with on piano?

Usually, songs that have relatively simple chord progressions, and strong melodies are a good place to start. Particularly when learning piano chords, getting familiar with a few easy shapes can go a long way with getting these songs under your fingers. Sticking to songs that have key signatures that only use a few sharps or flats, (the black notes on a keyboard), are suggested. Generally, keys that only use up to two sharps or flats are preferred. Melodies that stand out well make for easy memorization too, especially if it is a song that you are familiar with. Whether this is a melody originally played on a keyboard or is a vocal melody or on another instrument, learning these can make it helpful to memorize the notes on the keyboard.

Songs that follow easy structures in form, such as verse-chorus songs, are best as they are easy to follow. They often repeat the same sections identically making memorization easier. There are popular songs from all decades that keep these sections short and easy to follow, regardless of their genre. With time, common patterns in song structures will become recognizable and the process of learning more songs becomes even easier.

Many of these concepts are in the songs listed below to some extent or combination. 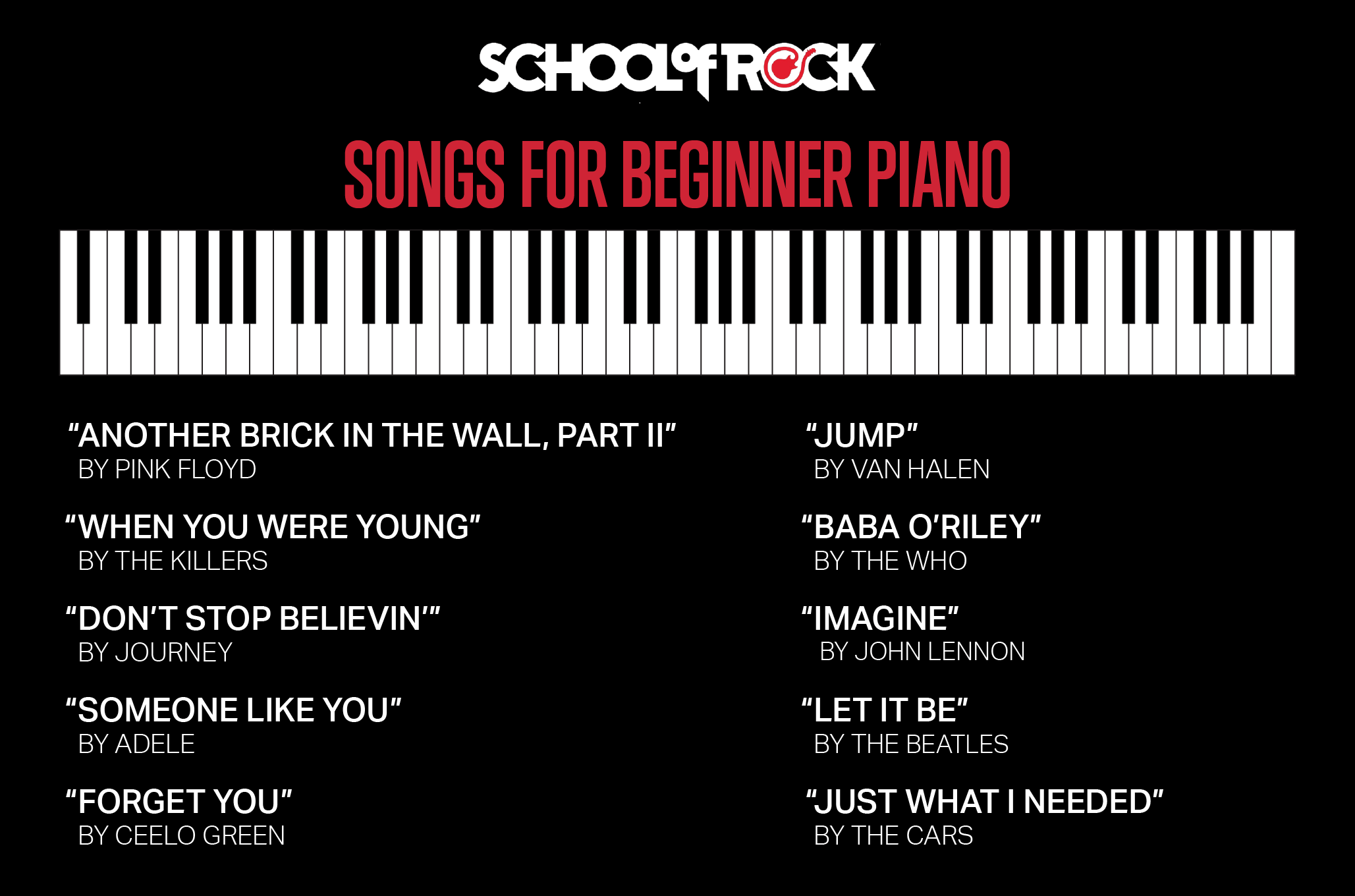 HERE ARE SOME BEginner piano SONG IDEAS IN ALPHABETICAL ORDER BY TITLE:

Another Brick in the Wall, Part II – Pink Floyd

Famous for both its disco-influenced bassline and shouted refrain, the organ part in this Pink Floyd hit is an example of “less is more.” Filling in behind the guitar lines, the organ in this song holds down sustained chords, also called “pads” for most of the track and becomes more prominent in the guitar solo. The melody line of this song is also a simple motif that is repeated several times within the song. This makes it a very beginner-friendly song for learning melodic playing.

Baba O’Riley – The Who

This song’s main riff that is often taught for guitar and bass beginners, actually starts on a piano before those instruments enter. (The also famous synthesizer intro was played mechanically by an electric organ, so no need to worry about playing that blazingly fast part!) This riff is great for piano players to learn playing the same part at different levels of difficulty, from single notes, power chords, full inverted chords, and with either one hand or both hands together! As it’s a popular song with guitarists, it will also make for a great song to jam with other bandmates.

One of the all-time most famous rock piano riffs, a stadium rock staple and reborn through a Glee cover, there is little more to be said for stating this song’s place in popular culture. As a song for beginners, it offers a great opportunity to develop both left- and right-hand parts, (best practiced separately at first for beginner students!) With the right hand providing a repeating broken chord structure, while the left doubles the bass guitar on climbing notes leading to each chord in the main riff, there is a lot that can be learned from Jonathan Cain’s piano part.

A modern take on old Motown styles from the ‘60s, this song uses a repeated piano riff as its base. Much like songs from that era, Forget You uses syncopated chords placed between the strong beats to create a funky feeling that plays well alongside the drums. Both the verses and choruses also make use of the same three chords, making this another easy progression to follow. As the main hook of this song is played in the left hand, it is a great one to learn and strengthen that hand and double the bass guitar.

Lennon’s gentle ballad is another classic for its simple but powerful words and music. The song is another on this list that follows a verse-chorus-bridge structure, each section using beginner friendly chords. This is a great song for learning to play broken chords to make the rhythm more interesting than just playing held chords. This can be learned with either one or both hands working together as it was originally performed. It also can be used to learn holding the sustain pedal for each chord to build a richer sound.

Shifting from piano to synthesizer, this is another famous rock keyboard riff that will work with either sound. While Eddie Van Halen was already renowned for his guitar work, he showed his proficiency on keyboards in this hit. Written mostly in C major (all-white keys!), this song keeps a constant root note in the left hand while the right plays a repeated chord motif. The pre-chorus is slightly more difficult with some changing rhythms but stays with simple chords in the same key.

JUST WHAT I NEEDED – THE CARS

One of their earliest hits, this song from The Cars demonstrates an excellent example of catchy hooks in the vocals and instruments that make it a staple of power pop. There are two different synth solos near the start and end of the song that are beginner friendly. These solos are great for understanding chord tones in a melody and give a chance for the keyboard player to stand out as a soloist in a rock band for a change! The chord progression is also easy to double the rhythm guitar parts, something that can be heard in live versions from the band.

LET IT BE – THE BEATLES

A timeless ballad, this is another song that follows a relatively easy verse-chorus-bridge form. The verse section is written with one of the most common chord progressions in popular music using the I-V-vi-IV pattern in C major. The descending piano line at the end of each verse and chorus also provides a way to learn passing tones between chords in both hands. During the bridge, both the piano and organ double up to extend this descending pattern even further before leading into the guitar solo.

This heartbreak ballad is famous for only having piano accompanying the vocals in a stripped-back arrangement. The arrangement borrows from a classical-style and is not as complex as it can sound on first listen. Like other songs above, this song has a verse-chorus-bridge structure and uses only a small handful of chords that appear in all sections. The right-hand part does make a lot of use of broken chords with the notes played ascending and descending instead of at the exact same time as “block chords” but does not require as much hand movement as playing arpeggios. A great way to build individual finger strength by starting this song out slowly and building up to the tempo of the recording.

WHEN YOU WERE YOUNG – THE KILLERS

A high-energy stadium rock hit, this song features another chord progression that can be learned and relearned at different levels of difficulty as you progress; whether starting with single notes, power chords, or both hands together. As this progression is repeated through almost all the song, it makes for quick learning and experimenting with dynamics. The main melodic hook of the song is also traded between the guitar and synth, changing up from just playing chords. The bridge section uses some slightly more challenging chords on black key roots, but doesn’t make rapid changes, allowing for time to find the notes.

No matter what style and era of music you like, there are lots of songs out there to begin learning to help develop skills on a keyboard and have fun playing. All the songs above feature piano or keyboard instruments in some way, and have transcriptions or arrangements in the School of Rock Method App. There are also lots of songs that are great to learn for beginners even if there isn’t a distinct piano part. Just start with learning some simple chord shapes and go from there. Learning just the melody for pop songs can also be a great starting place for getting familiar with the instrument.

Another thing to consider is to look for songs that use a technique or a skill that is new to you. Even if the songs aren’t hard in some ways, you can use this to try new keyboard techniques such as arpeggios, sophisticated left-hand bass lines, using the pedals, syncopated rhythms, keyboard solos, or anything else. If a song has a difficult learning curve, remember to always start very slowly, and work with one hand at a time. If you learn both hands incorrectly together, it is a lot harder to change and correct the song later! Your instructor can help guide you on songs that fit these needs as you develop your skills further.

Galen Cussion is a music instructor at School of Rock Orleans teaching guitar, bass guitar and keyboard. He currently performs with the bands Blind Aura and The Tackies, the latter of which have toured across Eastern Canada, performed at 2017's edition of Ottawa Bluesfest, won the "Ottawa Life Magazine" Cover Me contest and has worked with artists such as The Lazys, Modern Space, LIGHTS, Alvvays and Jim Bryson.