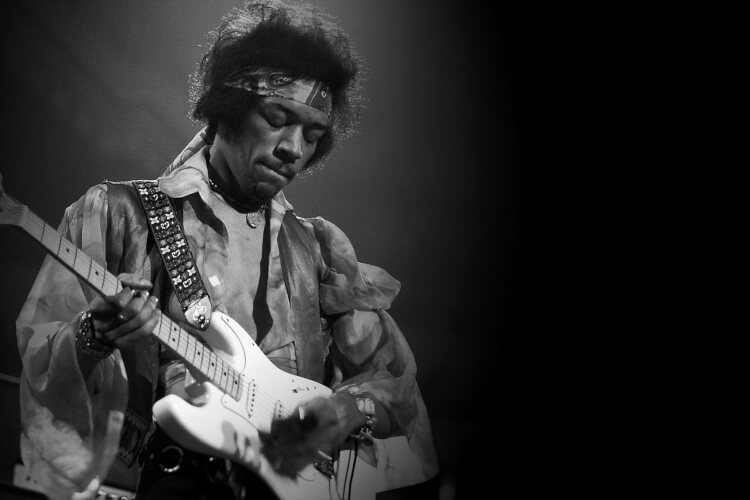 9 Black Musicians that Changed the Industry

Take a moment and think of your favorite modern musician or band. Got one in mind? Now think about what it is that you like about their music. Is it the tone of the guitar? Is it the lyrics the singer belts out? Or is it an interesting combination of genres that makes this artist stand out? Now take another moment and think about which artists might have “set the stage,” so to speak, for you, and the artists that influence you.

As musicians, it’s great to live “in the now,” but it’s also important to understand and appreciate the music that came before us. These pioneers are who fought passionately to pave the way in the musical world - some of the original “movers and shakers” who helped shape and mold the industry into what it is today.

Here’s a list of 9 Black musicians that changed the industry.

Jazz artist Louis Armstrong, also sometimes referred to as simply “Satchmo”,  was a jazz trumpeter whose tone’s richness could only be rivaled by that of his singing voice. In a way, he used his voice like a trumpet, with his wide vibrato and his tremendous skill for scatting. Armstrong’s unique style of singing influenced other incredibly talented artists such as Billie Holiday, Ella Fitzgerald, Frank Sinatra, and Bing Crosby.

While the composer of the original song is unknown, Armstrong and his orchestra’s 1938 rendition of “When the Saints Go Marching In” is known as one of the most famous performances of the song. While the song had previously only been performed as a traditional gospel song, Armstrong was notably the first to release a recording of the song as a jazz standard. Many fans credit Armstrong with putting the song, and the genre of jazz itself, “on the map.”

Sam Cooke, sometimes referred to as the “Father of Soul Music,” was a singer and songwriter in the soul, R&B, and gospel genres. Having been singing since childhood, Cooke became the lead singer of the Soul Stirrers - a band he had been a fan of while he was growing up. By his late twenties, Cooke began releasing solo music. As Cooke developed his signature sound, he created a crossover of gospel and pop music. During his relatively short professional career spanning only eight years, Cooke released 29 songs that charted in the Top 40 Billboard Pop Singles.

The 1964 single  “A Change is Gonna Come” was on the charts for 7 weeks and peaked at #31 in 1965.  Cooke wrote “A Change is Gonna Come” in response to Bob Dylan’s song, “Blowin’ in the Wind.” However, the inspiration for this song's message came from an incident that occurred when Cooke and some friends were turned away at a “whites-only” hotel. This song is one of Cooke’s most political, and it essentially became a civil rights anthem. The song was performed by Bettye LaVette and Jon Bon Jovi at the inaugural concert of former President Barack Obama.

Funk and soul singer and songwriter James Brown was one of the most recognizable performers in his genre, helping him earn the nickname of the “Godfather of Soul.” Brown had a tumultuous childhood, and is said to have been kicked out of school at the age of 12 for “insufficient clothing.” Around this time, Brown began channeling his energy into music and started singing in the church choir. Brown joined his first group, The Gospel Starlighters, when a friend of his called Bobby Byrd, invited him to join. The group was later renamed the Famous Flames and had several Billboard Top 40 charting singles. Brown inspired many up-and-coming artists - most notably the young Michael Jackson. Upon Brown’s death in 2006, Jackson stated that Brown was one of his biggest inspirations, stating he’d “never seen a performer like James Brown and right then and there [he] knew that that was what [he] wanted to do for the rest of [his] life.”

During his long and prolific career, Brown went on to release many well-received songs as a solo artist. One of his most famous songs is “I Got You (I Feel Good),” which Brown wrote, sang, and produced. Out of all Brown’s charting songs during his long career, spanning from 1944 to 2006 (the year he passed away), “I Got You (I Feel Good)” was undoubtedly his most successful song. On the Billboard HOT 100, his song charted for 12 weeks in total, and for 7 of those weeks, was in the top 10, peaking at #3.

Etta James was a six-time Grammy Award-winning singer whose genres included gospel, blues, rock and roll, jazz, R&B, and soul. A child prodigy, James began her vocal training at the age of 5 and was known to have a very powerful voice for a child so young. She mainly sang at church and also on the radio. At the young age of 16, James began recording a song called “The Wallflower” which spearheaded her prolific catalog of hit songs. James was known for her ability to stylize the songs she sang. She was quoted as saying, “My mother always told me, even if a song has been done a thousand times, you can still bring something of it to your own. I’d like to think I did that.”

Throughout her professional career, James had several hits that landed on the charts. Her 1962 single “Something’s Got a Hold on Me” charted on the Billboard 100 for 12 consecutive weeks, peaking at #37. More impressively, the single was also on the Billboard Hot R&B Sides, peaking at #4. The song was so widely appreciated that it inspired several other well-known artists to record and perform covers of it. Some artists who covered the song were Ike & Tina Turner in 1964, The Kingsmen in 1965, and more recently, pop diva Christina Aguilera in 2010.

Psychedelic rock and blues artist Jimi Hendrix was a singer, songwriter, and perhaps most notably, guitarist. Hendrix had experimented with unconventional ways to play his guitar, such as being a left-handed individual but choosing to simply play a right-handed guitar upside down. However, it was when he began experimenting with his guitar tone and effects that Hendrix developed his signature sound. Following his experimental curiosity, he essentially developed a new guitar style.

Hendrix’s group, The Jimi Hendrix Experience, went on to create many world-renowned songs. One such song from the psychedelic rock group is the 1967 single, “Purple Haze,” which was inducted into the Grammy Hall of Fame in 2000. The song features Hendrix playing his guitar with heavy, deliberate distortion.

Soul and R&B artist Aretha Franklin, also known as the “Queen of Soul,”  was a singer, songwriter, and pianist. Franklin got her start singing gospel in her church choir and she began touring churches around the country at the age of 12, under the management of her father. During one of the tours, she met artist Sam Cooke, who inspired her to pursue a career in pop music. At the tender age of only 18, she signed her first (major) record contract with Columbia Records and is known today as one of the world's best-selling musical artists.

Her catalog of popular songs is quite extensive, featuring massive hits such as “Chain of Fools” and “(You Make Me Feel Like) Natural Woman.” One of her most successful songs ever is the 1967 release “Respect,” a cover of a song written, performed, and released just two years prior by soul singer Otis Redding. Franklin’s cover of the song was markedly more popular than the original. Her refreshing new arrangement, along with her more dramatic delivery of the lyrics, has helped the song become known as a “feminist anthem” to this day.

Stevie Wonder is a prolific singer, songwriter, keyboardist, harmonicist, and record producer whose sound is a culmination of genres that spans soul, R&B, funk, gospel, progressive, and jazz. Wonder suffered vision loss shortly after his birth, and from that point onward was considered legally blind. In a 2010 CNN interview, Wonder explained that he and his doctors attribute his blindness to being born six weeks premature and thus being placed in an oxygen incubator with a high temperature, which was later discovered to cause medical issues in infants. Wonder, whose birth name is Stevland Judkins, earned the professional nickname “Little Stevie Wonder” when the 12-year-old prodigy signed to Motown Records. He released his first album, “The Jazz Soul of Little Stevie Wonder,” in 1962. He has since gone on to release 22 more albums. Wonder was one of the first artists to help popularize the Moog synthesizer at a time when synthesizers weren’t seen as “real instruments.” Today, the synthesizer is very famously used in almost every genre of music.

Wonder was the youngest solo artist to ever top the Billboard 100 chart when he was only 13, and his career only took off from there. Throughout his entire career, he has had 10 singles top the pop charts and 20 singles top the R&B charts. One of his most famous songs is the 1972 single, “Superstition,” which scored number 1 on the Billboard Hot 100 the following year. In 2004, the song was also ranked #73 on Rolling Stone’s Top 500 Greatest Songs of All Time list.

Pop and R&B artist Michael Jackson, also known as the “King of Pop,”  was a singer, songwriter, and dancer who got his start at the young age of 5, when his siblings formed a group called The Jackson 5 and he joined shortly after. The group went on to become famous regionally, then nationally, and then internationally for their melodious voices and swift dance moves. Moving into adulthood, many of his siblings went off to pursue solo careers, but Jackon’s career was undoubtedly one of the most successful.

Michael Jackson went on to write and perform some of the most cherished songs in pop music. His sixth studio album, “Thriller,” is particularly noteworthy as it had many hard-hitting singles, including “Beat It,” “Wanna Be Startin’ Somethin’,” and of course the album’s namesake and its epic music video, “Thriller.” Even more impressive, the album’s second single, “Billie Jean,” was ranked number 2  on the Billboard Top 100 chart in 1983. According to a report from the Guinness World Records, “Thriller” is known as the world’s best-selling album.

Prince was an incredibly successful singer, songwriter, guitarist, and record producer. His sound transcended genres and included elements from funk, rock, R&B, hip-hop, synth-pop, and soul. Prince was famously known for his androgynous appearance, which was met with sharp criticism at the time. Fellow musician Rick James notably stated that he believed that Prince was a “mentally disturbed young man.” Throughout Prince’s career, he released many songs that gained negative attention due to their graphic nature. It was one of Prince’s songs that motivated the Parent Music Resource Center (PMRC) to create the “Filthy Fifteen” list of inappropriate songs and to push for the placement of parental advisory stickers on albums that were deemed inappropriate for a younger audience. Despite the negative connotations of the list and the warning labels, Prince’s success only grew. His music and image influenced many artists we have today, such as Alicia Keys, Andre 3000, The Weeknd, and Bruno Mars.

Throughout his career, Prince released countless charting songs. One of his biggest releases was the 1984 power ballad “Purple Rain,” which peaked at #2 on the Billboard Hot 100. Prince’s emotional, almost mournful vocal delivery, coupled with a hard-hitting guitar solo is what makes this song so memorable. Following the release of the “Purple Rain” album, Warner Bros. Pictures released a film of the same name, which starred Prince and featured music from the album. The film was considered successful, grossing $68,392,997 worldwide.

Lynzi Stringer is a singer-songwriter in Indianapolis and vocal instructor at School of Rock Fishers. She fronts her own band and plays all around town. Other than instructing vocals, she also works as a session vocalist and has been able to work with musicians, singers, and rappers from all over the world.