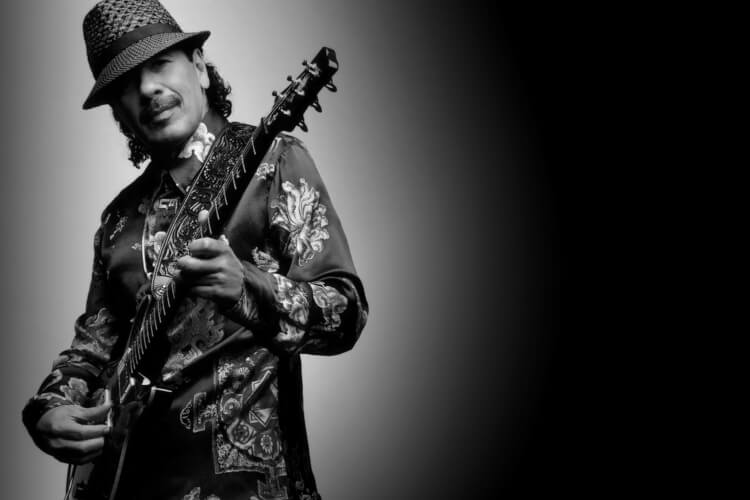 At School of Rock, we celebrate some of rock music’s earliest artists and influencers. Many of these artists were inspired by musicians that came from other genres, such as Latin rhythms, Blues Rock, and Mexican Folk. You will find these inspirations in most of the artists listed in this article. In addition to their biographies, be sure to check out their notable songs and what popular artists or bands they are known to have directly influenced.

Don’t forget to review all of our other artist lists.

Guitarist Carlos Santana first rose to prominence in the fertile late '60s San Francisco Rock scene by combining Latin rhythms with Blues Rock guitar to create a new sound. Santana was born in Jalisco, Mexico in 1947. The family moved to Tijuana and Carlos took up the violin and later guitar. His father was a Mariachi musician, but Carlos became enamored with the Blues. His family then moved to the San Francisco area where he was exposed to multiple forms of music including jazz greats John Coltrane and Gabor Sza.

While starting out in San Francisco, The Santana Blues band caught the attention of concert impresario Bill Graham. The band featured the vocals and organ playing of Gregg Rollie along with Latin percussionists. After signing to Columbia Records, the band released their self-titled debut album in 1969 which included their first hit song, a cover of Latin percussionist Willie Bobo’s "Evil Ways." Before the album was even released, Santana (they dropped Blues Band from their name when they signed their record deal) made their legendary performance at Woodstock. Fueled by the incendiary version of the eleven-minute tune "Soul Sacrifice," Santana and the band made their presence known to the world.

1970 saw the release of their second album, Abraxis, which featured the mega hits "Oye Coma Vas" and "Black Magic Woman." "Black Magic Woman" was written by the British Blues band Fleetwood Mac’s Peter Green, but the Santana version proved to be the most popular version. Abraxis took the number one spot on the Billboard chart and the album eventually sold in excess of four million copies. Around this time, teenage guitarist Neal Schon had also joined the group. While he is not featured on any studio albums, Schon later rose to prominence with Journey, which also featured Santana vocalist/keyboardist Greg Rollie.

By this point, Santana had fully developed his trademark sustained, liquid tone for which he is famous. His sound relied on long, soulful sustained notes with extended solos that owed as much to Jazz as they did the Blues. According to legend, Carlos was instrumental in the development of Mesa Boogie amplifiers after playing a prototype amp in which Carlos exclaimed "this little thing really boogies!" Later in his career, he was also important to the rise to prominence of Paul Reed Smith (PRS) Guitars. PRS honored Carlos with his own signature model which is extremely popular.

Their third album, Santana III, featured the hit "No One to Depend On" and also reached the number one spot on the album charts. The fourth album, Caravanserai, marked a departure from the now classic Santana sound and went farther into Jazz fusion territory. While the record was a commercial success, it did not yield any hit singles and commercial success was starting to fade slightly. Around the same time, Carlos had a spiritual awakening that stemmed from his friendship with Jazz Fusionist guitarist John McLaughlin. Following in the footsteps of McLaughlin’s Mahavishnu Orchestra, Santana continued to branch out to more experimental Jazz and farther away from the Latin Blues Rock style that he had established.

Through the ’80s, Santana drifted back to the '60s FM Rock radio style and had moderate success with songs such as 1981’s hit song "Winning." After being on Columbia records for 22 years, Carlos signed with Polydor in 1990 but eventually was dropped after releasing several albums that did not chart. A major turning point was reached in 1999 when Santana signed to Clive Davis’ Arista Records. At the urging of Davis, Carlos recorded Supernatural, an album featuring younger guest vocalists and musicians which included the mega-smash hit "Smooth" with Matchbox Twenty’s Rob Thomas providing the lead vocal. Supernatural won nine Grammy awards including Album of the Year, Record of the Year, and Song of the Year. Santana was once again on top of the charts bringing his signature Latin Rock guitar licks to the mainstream.

Santana continues to tour, record, and collaborate with a number of artists. In 1998 he was inducted into the Rock and Roll Hall of Fame as a solo artist as well as a member of the band Santana. Carlos paved the way for the appreciation and acceptance of Latin music to a worldwide audience. His message of spirituality and love is as timeless as his signature guitar sound. His work with the Milagro Foundation and Music Will (formerly known as Little Kids Rock) has helped thousands of children receive health care and music education.

Will the Wolf Survive, Kiko and the Lavender Moon, La Bamba, One Time, One Night, and Don’t Worry Baby

Los Lobos (or the Wolves) began in 1973 in East Los Angeles, California. Led by duel guitarist/vocalists David Hidalgo and Cesar Rojas, Los Lobos began as a cover band that began incorporating Mexican Folk music with '60s Rock influences. The original lineup also featured multi-instrumentalist and singer Louie Perez, Bassist Conrad Lozano, and vocalist/mandolin player Fran Gonzalez. Gonzales left the group in 1976. They recorded their debut album in 1977, Los Lobos del Este de Los Angeles (the Wolves of East Los Angeles). The album featured traditional Mexican music such as boleros and rancheros and did not have traditional Rock drums. The band mainly played at weddings and parties throughout the '70s and into the early '80s.

In the early '80s, the underground Rock scene began to embrace Los Lobos and they added back some of the Rock elements they had turned away from when they focused on traditional Mexican Folk music. They began playing with the LA Roots/Punk bands such as the Blasters and X as well as neo-traditionalists such as Dwight Yokum. Los Lobos were quickly gaining fans among the adventurous alternative fans while still appealing to fans of their Mexican Roots stylings. The Blasters’ Steve Berlin added keyboards and saxophone and Louie Perez switched over to a traditional drum set. In 1983, they released an EP, …And A Time To Dance, on upstart Indie Label Slash Records. Produced by Berlin and T-Bone Burnett, the record signaled a change to a potent mixture of Mexican Folk and Roots Rock. The band began to tour nationally and soon they released their major label debut, How Will the Wolf Survive?, in 1984. Berlin was now a full-time member of Los Lobos. The title track along with "Don’t Worry Baby" and "I Got Loaded" are radio staples and mainstays in the band's riveting live sets.

1987 saw the release of By the Light of The Moon as well as covers of Ritchie Valens’ hit songs for the soundtrack of the biopic La Bomba. "La Bomba," "Come On, Let’s Go," and "Donna" all charted and Los Lobos were now part of Pop culture and enjoyed mainstream success. They toured with megastars such as U2 and Bob Dylan, and contributed tracks to tribute compilations honoring the Grateful Dead and Richard Thompson. Los Lobos were a legitimate force in music. Constantly switching musical gears, 1988’s La Pistola y El Corazon featured traditional instruments and focused on Tejano and Mariachi music.

In 1990, the band released The Neighborhood to critical acclaim. The album featured collaborations with artists such as John Hiatt and Levon Helm and also several guest studio drummers. Their next record, Kiko, is regarded as an experimental masterpiece. Produced by Mitchell Froom, the record was a bold artistic step for the band that added adventurous sonic textures to the band’s mix of Rock and traditional music. They had reached great success with their La Bomba remake, but Kiko showed that they weren’t just Chicano Rock revivalists.

Los Lobos then released a retrospective double album, Just Another Band From East LA, in 1993. The tracks span the band's releases and include unreleased and live tracks. Some other highlights of their vast catalog include Papa's Dream (1995), Colossal Head (1996), This Time (1999), Good Morning Aztlán (2002), and Los Lobos Goes Disney (2009).

The band’s most recent release, Native Sons (2021), is a highly acclaimed collection of covers of California artists that influenced the band alongside the title track, the one original composition on the album. Featuring songs by Chicano Rockers such as Thee Midniters, the Premiers, and War, the record also has songs by the Beach Boys, the Byrds, and Jackson Browne. The band has been nominated for induction to the Rock and Roll Hall of Fame, won multiple Grammy awards, and has been named National Heritage Fellows by the National Endowment of the Arts. 2023 will mark the band’s 50th Anniversary.

Ritchie Valens, born Richard Valenzuela in 1941, was the first Mexican-American Rock Star. Starting in 1957 with his first local band at the age of 16, Valens burst onto the scene after being discovered in May of 1958 by Bob Keane, owner of Del-Fi Records in Los Angeles. Keane convinced Valens to shorten his name to appeal to white audiences and signed him as a solo artist. Valens' first single "Come On, Let’s Go" was released in July of 1958. Backing the teenage Valens was drummer Earl Palmer who had previously recorded with Little Richard and Carole Kaye, who is perhaps the most recorded bassist in music history. Both were known as part of the infamous “Wrecking Crew” who played on hits by everyone from the Beach Boys to Frank Zappa. "Come On, Let’s Go" was later covered by Los Lobos.

After the success of his debut single, Valens returned to the studio and recorded an A-side, "Donna," along with the B-Side of "La Bomba." "Donna" was written for his girlfriend, Donna, whose parents did not approve of their relationship. While both songs were popular, the B-side "La Bomba" (a Mexican Folk song from the Veracruz region) proved to be a smash hit, and the single sold more than a million copies launching Valens’ career and making him a star. The first recorded version of "La Bomba" (titled "El Jarocho") dates to the late 1930s but its origins predate the original recorded version.

Success was very short-lived for Valens as he died in the plane crash that also claimed the lives of Buddy Holly, JP “the Big Bopper” Richardson, and Holly guitarist Tommy Allsup. The crash was memorialized in the song "American Pie" by Don McLean, and the date of the crash (February 3rd, 1959) has since been known as “the day the music died.” Valens’ life was cut short at the age of 17 and his entire professional career lasted less than two full years.

Valens was immortalized by the 1987 biopic La Bomba starring Lou Diamond Phillips. Relatively unknown East LA band Los Lobos provided the soundtrack music and they had a #1 hit with their cover of La Bomba introducing “the Wolves” to the world. The impact of Valens’ trailblazing music is seen in the 60’s Chicano Rock bands such as the Midniters and Hannibal and the Headhunters all the way to modern acts such as DannyLux. Valens was inducted into the Rock and Roll Hall of Fame in 2001.