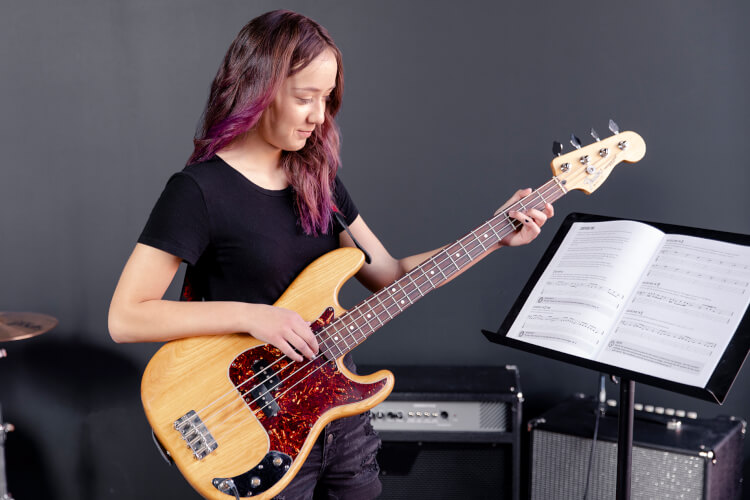 So you’ve decided to learn to play bass guitar? Congratulations, and welcome to a club that includes talented, diverse, and sometimes eccentric individuals such as Flea, Paul McCartney, Sting, John Paul Jones, John Deacon, and Gene Simmons. If you don’t know these bassists, your first step should be to look them up and watch/listen to them play! Find your favorites and let them encourage and motivate you. The bass is the heart of the band (at least according to us bassists) but the parts can be long and repetitive, so watching professionals helps you bring your own attitude and passion to the instrument.

Now, it’s time to play, but with so much music in the world, where do you start? If you don’t already have some favorite songs in mind, here are suggestions that will help you learn the basics of notation or tablature, key signatures, fingerings, rhythm, and tempo, all without boring you with endless repeats of the same eight bars. The secret to getting good at this is repetition, which is up to you, and learning good technique — from School of Rock teachers, of course. 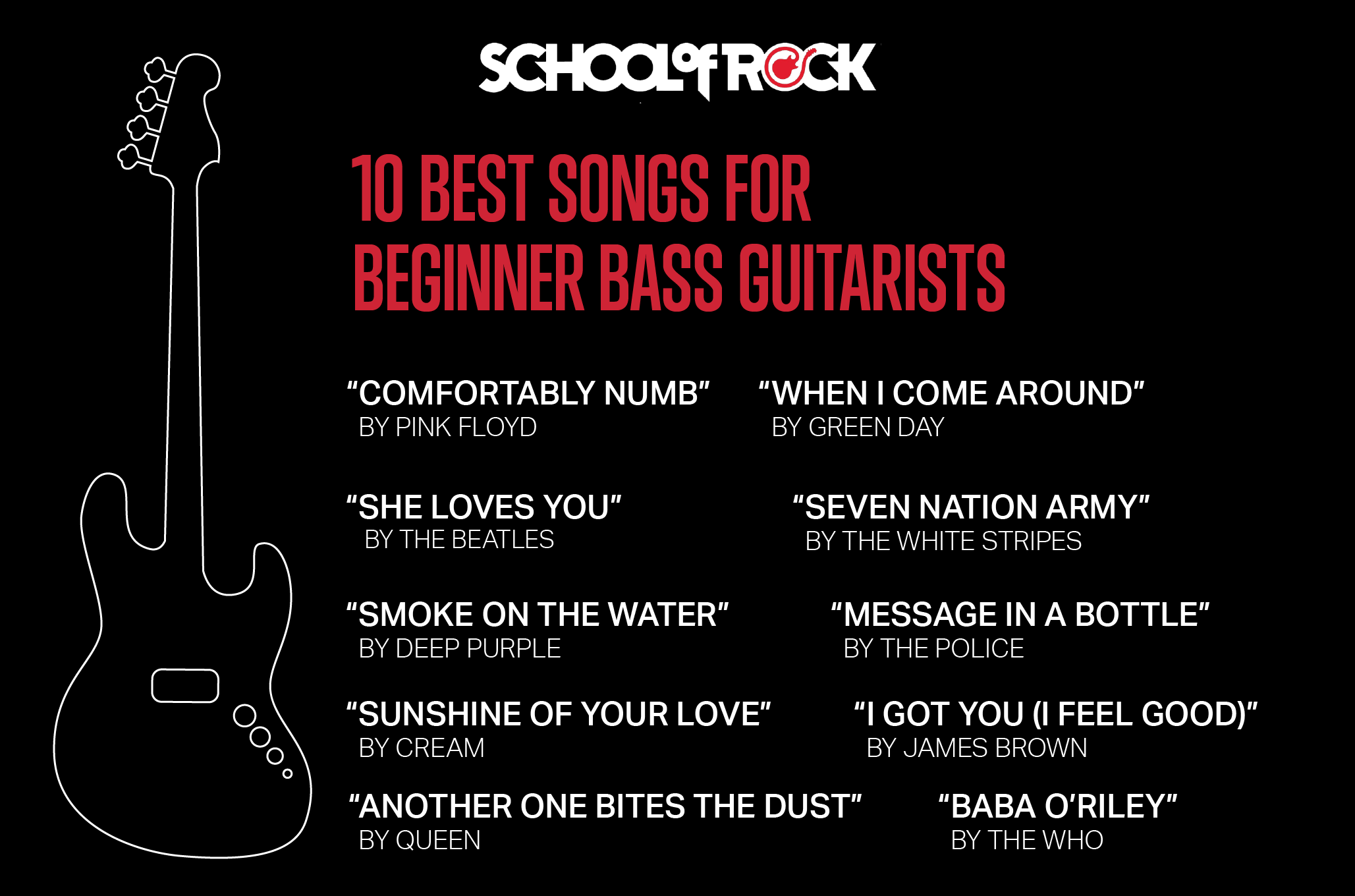 A good beginner bass part is one that is not too simple but not overwhelming, exposes you to different techniques and tempos, and builds your confidence.

What better way to start a bass guitar journey than with some classic Paul McCartney. You could learn most of what you need to know by following the growth of McCartney as a bassist over the year, and She Loves You is a perfect example of the early “simpler” years.

What makes “She Loves You” a good song for beginner bassists?

How does “She Loves You” challenge beginner bassists?

Looks are deceiving. She Loves You has a fast and driving beat so you need to keep pushing and build stamina. You can also play it McCartney style using a pick, and if you’re so inclined, left-handed.

This next song is a winner and it’s from a band that didn’t have a bass player! Huh? Yes, the White Stripes were a duo and notorious for their lack of a bassist in live performances. Yet, Seven Nation Army is an accessible next step into more ambitious rock music.

This is a leap into a long, repetitive, yet simple bass part that keeps you on your toes. You learn how to deal with triplets, eight notes, and rhythm variations. Be sure to be well hydrated before taking this on!

There are few bass lines that are as recognizable as Jack Bruce’s iconic track on Sunshine of Your Love. It’s the beating engine of the song, sticks in your head, and is just darn fun to play. Sunshine also can be played simply by the beginner and with bells and whistles for the advancing player.

What makes “Sunshine of Your Love” a good song for beginner bassists?

How does “Sunshine of Your Love” challenge beginner bassists?

The part requires stamina and precision. It’s not hard to play but it’s hard to play it right and keep it going for 110+ measures. Sunshine also provides an opportunity to explore the fingerboard using various positions.

Rock music is interesting because it embraces characteristics from all different genres. Smoke on the Water is actually a four-note blues scale, and it introduces our first key with flats - G Minor. It’s not a difficult part but it will test your finger strength and ability to maintain a strong moderate tempo.

What makes “Smoke on the Water” a good song for beginner bassists?

How does “Smoke on the Water” challenge beginner bassists?

Smoke contains over 1200 notes! That’s a long, dense bass part and while it’s easily playable, it will take time to build up to full tempo and hold it to the end.

5. “Another One Bites the Dust,” by Queen

Here’s another classic that will be hard to get out of your head, and the best part is that the song was written by Queen’s bassist, John Deacon. The part is uncomplicated and repetitive but then there are those four bars ahead of the chorus -- a bassist’s chance to shine or epically fail.

What makes “Another One Bites the Dust” a good song for beginner bassists?

How does “Another One Bites the Dust” challenge beginner bassists?

Another One Bites the Dust introduces new challenges including an alternate tuning for the bass, the E Minor key, and advanced rhythms yet it remains approachable.

It’s time to experience the monotony of being a bassist. Message in a Bottle is a great driving rock song written by a bassist, Sting, with a repetitive bass line that has two sections with four notes each. Regardless, this is a must play!

What makes “Message in a Bottle” a good song for beginner bassists?

How does “Message in a Bottle” challenge a beginner bass guitarist?

For this song to work, it has to have a driving beat. If you slow it down or fall out of sync with the drummer, the song breaks quickly. It doesn’t matter if it’s loud or soft, it still has to rock, and the bass needs to drive it.

When it comes to rock ballads, Pink Floyd’s Comfortably Numb is right at the top of the list, and the best part is the simplistic bass line prominent throughout. The part isn’t complicated but it has to be lyrical and consistent in tempo to fulfill the potential of this classic piece.

What makes “Comfortably Numb” a good song for beginner bassists?

How does “Comfortably Numb” challenge a beginner bass guitarist?

The key of C Major (2 sharps) and a tempo of 64 beats per minute don’t pose any particular problem for the aspiring bassist. The challenge comes from the over 6 minute song duration -- that’s a long haul for untrained fingers on both hands. You’ll be glad when you’ve built up your stamina.

Every bassist needs a Who song in their repertoire, and this one is a good starter. It’s not difficult but it does have its challenges with some long periods of rest, varying rhythms, and a fast double time section.

How does “Baba O’Riley” challenge a beginner bass guitarist?

Great bassists are versatile and this song helps to develop that characteristic by including varied, long, challenging sections.

One quality that defines an experienced rock bassist is the ability to play recognizable riffs, and the repeating two bar bass riff in When I Come Around is as recognizable as it gets. It’s not easy but it’s short and powerful!

What makes “When I Come Around” a good song for beginner bassists?

How does “When I Come Around” challenge a beginner bassist?

Once you learn the riff, you still have to deal with the fast tempo and the alternate tuning. Oh, and don’t forget about counting those repeats.

Let’s end our top 10 with James Brown’s biggest hit. This classic 12-bar blues riff drifts over into Brown’s famous funk. You can play it comfortably at Brown’s original 144 BPM or test your metal at his more raucous recording speed of 195. Either way, I Got You will certainly help you get your groove on.

What makes “I Got You” a good song for beginner bassists?

How does “I Got You” challenge a beginner bassist?

You may feel intimidated whenever you break away from standard rock chord structures, but in this song, you can work on the blues and infuse some funk. With enough repetition, it will become second nature.

The School of Rock Method builds musical proficiency through our proprietary Method App, Method Book collection, SongFirst approach, and performance-based music curriculum. Our Method has been awarded a patent making our teaching system available nowhere else. Learn more and sign up for a trial lesson by completing the form below.

Larry Perlstein is one of the owners of School of Rock West Hartford in Connecticut. Learn more about how to open your own School of Rock location in your neighborhood at https://franchising.schoolofrock.com.