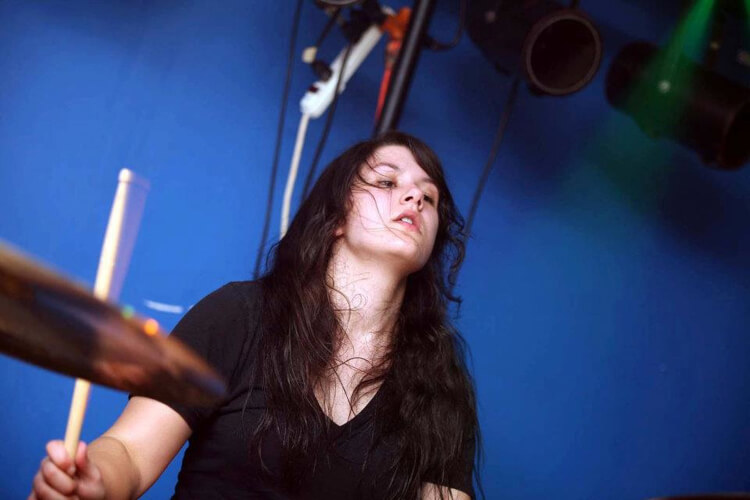 Kaleen Reading is much more than a New Jersey native with an eye for talent and an ear for music. She is an extravaganza of a human with stories to tell, students to teach, songs to write, and tours to embark on.

It only makes sense that one of the premier educators at the Princeton, New Jersey chapter of School of Rock be a tried-and-true musician themselves. With an extensive background being an entertainer, as well as a student, teacher, and multi-talented musician, Kaleen Reading is owning up to her title of Icon-In-The-Making.

Who gave her that title? We did – and she’s more than deserving of it. Reading is a session drummer, a touring artist, a member of the critically-acclimaed Mannequin Pussy, and a School of Rock student turned All-Star turned instructor. In 2006, reading took charge of her life although only Midway through her adolescence, and enrolled at the coveted Music School. Those experiences and that camaraderie put her on the path she is on today, not only as a magnificently talented, multi-hyphenate School of Rock alumni, but as an inspiration to the wondrous, dramatic crime show, Mare of Easttown.

Indeed, the local legend, and Icon-In-The-Making has set the stage for one of the most thrilling, infectious, and immersive television shows on the market right now. (And in the age of streaming, there is more content than ever to get your fix of drama and excitement through fictional, or even semi-fictional, characters.)

Reading joined the band, Philadelphia’s very own Mannequin Pussy, in 2014. The alternative rock meets power punk group were – and are – slick with their lyrics and honest with their instrumentation. Nothing is glossed over or sugar coated; everything is up-front, brash, exhilarating, and shining. These two women (Reading and Marisa Dabice) and one man (Colins Regisford) have talent and thoughts, messages and music, to share with the world. Nobody, locally, regionally, nationally, or otherwise, are going to stop them. The way that they interact with each other and the robust soundscapes they build is mesmerizing to watch… which plays right into the producers of Mare of Easttown wanting to highlight all of that and more.

The show starring Titantic’s beloved Kate Winslet does not actually include this tri-state area group, but does draw an innumeral amount of influence from their story and style. The fictional band that HBO created for the program dons Mannequin Pussy t-shirts and merchandise in a variety of scenes. The band is illuminated even further as the HBO team took their adoration and inspiration from our local favorites to another level by intertwining Mannequin Pussy songs throughout the show, within the plot, and into the eclectic score.

The energy and drive that this band has is evident in every single one of their songs and their approach to showcasing their professionalism – but always engaging amusement – on the stage.

Being a musician, especially a drummer, means not only being in tune and on time, but having passion and excitement coursing through your veins. Kaleen Reading has that. She is a massive talent, growing success story, and (once again) an Icon-In-The-Making. How many people living in the heart of New Jersey can say that HBO not only noticed them, their band, and the culture that surrounds it, but heavily includes it within their production for the benefit of their individual audience and the actual fans of the band? Not many, but Kaleen Reading of the Garden State can!

There’s so much more to her that has yet to be explored but with the helping hands of her Mannequin Pussy bandmates, her School of Rock students, and the team behind Mare of Easttown, she will surely go even further. Her next world-stopping, musical opportunity might be drumming alongside her own, already established icons: Dave Grohl and Brian Chase. We wouldn’t even be surprised at this point with the amount of milestones she and her bandmates keep exploring and hitting without a second thought.

Having this level of talent and passion in our Central Jersey backyard is amazing to say the very, very least, so if you hear us blasting Mannequin Pussy’s “Who You Are” today (and everyday), don’t be surprised. We’re merely supporting our local Icon-In-The-Making and favorite HBO show.